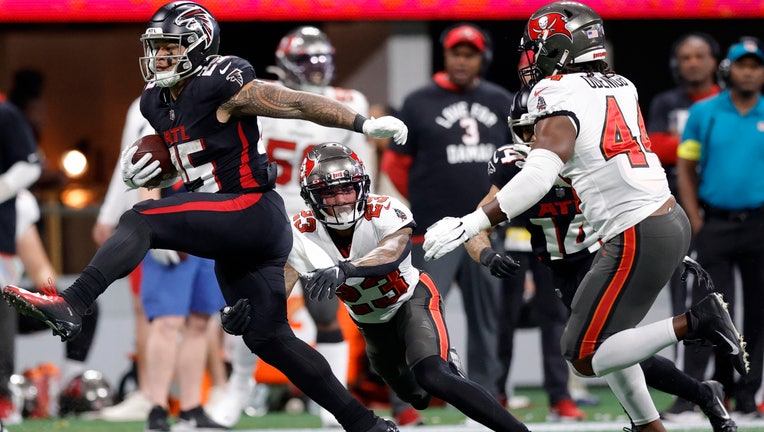 ATLANTA, GEORGIA - JANUARY 08: Tyler Allgeier #25 of the Atlanta Falcons runs the ball against Sean Murphy-Bunting #23 and Ifeadi Odenigbo #44 of the Tampa Bay Buccaneers during the third quarter at Mercedes-Benz Stadium on January 08, 2023 in Atlant

ATLANTA, Ga. - Rookie Desmond Ridder's first two career touchdown passes powered the Atlanta Falcons to a 30-17 win over the playoff-bound Tampa Bay Buccaneers on Sunday after Tom Brady broke his own NFL record for most completions in a season before leaving the game late in the first half.

Brady left with the score tied at 10 in the second quarter but had to watch the remainder of his first career loss to the Falcons from the sideline.

Brady had been 11-0 in his career against Atlanta, including New England's 34-28 win over the Falcons in the Super Bowl following the 2016 season. Led by Brady, the Patriots rallied from a 28-3 deficit.

The Falcons haven't been allowed to forget the epic Super Bowl collapse, but they can now claim to be responsible for Brady's first losing final record in a regular season.

Brady and Tampa Bay’s other healthy regulars started even though the Buccaneers (8-9) clinched the NFC South title by beating Carolina 30-24 last week and were locked in as the NFC’s No. 4 seed in the playoffs.

Brady had winning records in 21 consecutive regular seasons with New England and Tampa Bay before this season.

Brady began the day needing nine completions to top his 2021 single-season record of 485. He set the mark on a 5-yard pass to Russell Gage, the former Falcons receiver, early in the second quarter.

Brady completed 13 of 17 passes for 84 yards with a touchdown, giving him 490 completions for the season. Brady capped Tampa Bay's opening drive with an 8-yard scoring pass to tight end Kyle Rudolph.

Ridder completed 19 of 30 passes for 224 yards. He threw his first career scoring pass to tight end McCole Pruitt in the first quarter and added a 3-yard scoring pass to Olamide Zaccheaus late in the third quarter for a 20-17 lead. Cordarrelle Patterson added a 2-yard scoring run.

Ridder lost a fumble late in the second quarter. The ball slipped out of his hand as he was attempting to pass, and Devin White returned the fumble recovery 9 yards to the Atlanta 22. The play set up Gabbert's 3-yard scoring pass to Gage, giving the Bucs a 17-10 halftime lead.

Falcons left guard Matt Hennessey left the game with a knee injury in the third quarter.

Falcons: Will shift focus to making roster decisions and preparing for the NFL draft before opening their 2023 season at home against the Carolina Panthers.