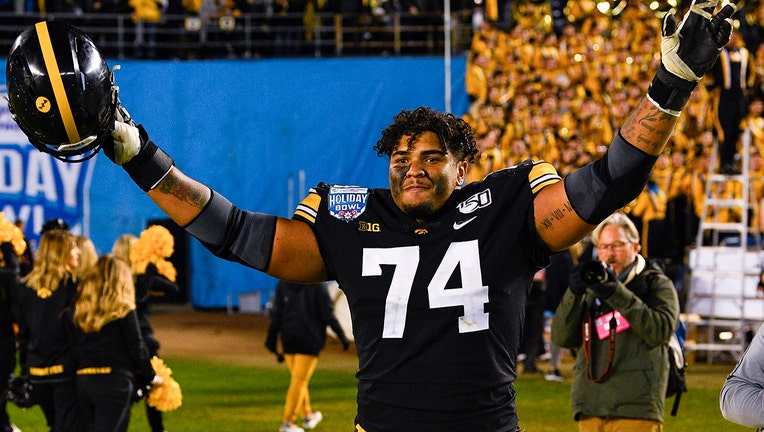 TAMPA, Fla. - The Tampa Bay Buccaneers selected offensive tackle Tristan Wirfs with the 13th pick in the NFL draft on Thursday night, trading up one spot in the selection order to ensure they secured more protection for recently acquired quarterback Tom Brady.

Bolstering the offensive line was the team's top priority after signing the six-time Super Bowl champion in free agency, trading for four-time All-Pro tight end Rob Gronkowski and spending generously to retain some key components of a defense that made strides the latter part of last season.

With several tackles -- Georgia's Andrew Thomas, Alabama's Jedrick Wills and Louisville's Mekhi Becton --off the board, the Bucs swung a deal with the San Francisco 49ers to move up one spot from No. 14 to take Wirfs.

MORE: Tom Brady knew months before Buccaneers signing his time with Patriots was coming to an end

The former Iowa star was rated among the top offensive lineman available in the draft and will be given an opportunity to fill an opening at right tackle created by the departure of long-time starter Demar Dotson, who was not re-signed after being a fixture in Tampa Bay's lineup since 2012.

Jameis Winston led the NFL in passing yards and threw for 33 touchdowns in 2019, however he also tossed 30 interceptions and was sacked 47 times as the Bucs finished 7-9 and missed the playoffs for the 12th consecutive season.
Shortly after signing Brady to a two-year, $50 million contract, coach Bruce Arians said he didn't believe a mostly veteran offensive line featuring left tackle Donovan Smith, center Ryan Jensen and guards Ali Marpet and Alex Cappa was in need of a significant upgrade.

MORE: Rob Gronkowski to return to NFL alongside Tom Brady in Tampa

he Bucs team subsequently signed former Indianapolis tackle Joe Haeg. He started 35 games over four seasons with the Colts -- none in 2019 -- and is being counted on to provide experienced depth.

"When you look back at the grades last year -- I don't put a lot of stock into what other people grade our guys -- they were graded pretty high," Arians, preparing for his second season with the Bucs, said at the time.

"I thought Donovan got a lot better. I think he'll get even more intense with Tom back there at quarterback than he has been, but he did play extremely well last year," Arians added. "Ali is solid. Ryan had a heck of a year. Cappa, I thought had a fantastic year for a young guy. ... I don't see it as a glaring need, but you're always looking to upgrade somewhere."
------
More AP NFL: https://apnews.com/NFL and https://twitter.com/AP--NFL