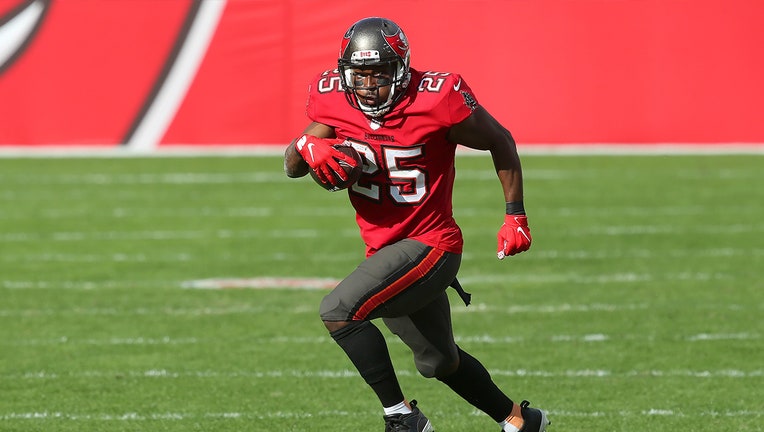 LeSean McCoy (25) of the Buccaneers runs the ball during the regular season game between the Minnesota Vikings and the Tampa Bay Buccaneers on December 13, 2020 at Raymond James Stadium in Tampa, Florida. (Photo by Cliff Welch/Icon Sportswire via Get

TAMPA, Fla. - Bruce Arians doesn’t shy away from talking to his Tampa Bay Buccaneers about the playoffs.

The 68-year-old coach’s message to players coming off the team’s bye was simple last week: December is about doing whatever is necessary to keep playing in January, regardless of record or seeding.

The Bucs (8-5) took a step toward ending the league’s second-longest postseason drought with Sunday’s 26-14 victory over the Minnesota Vikings. The win stopped a two-game skid and enabled them to hold on to the sixth seed in the crowded NFC race with three weeks left in the season.

The Bucs have missed the playoffs 12 consecutive seasons and haven’t won a postseason game since their Super Bowl run 18 years ago.

With Tom Brady running the offense, they’ve already won more games than a year ago, when Tampa Bay finished 7-9 in its first season under Arians. That won’t mean much, though, if the Bucs don’t finish strong and claim a postseason berth for the first time since 2007.

“December football is always huge, no matter what the situation is. You’re always playing for something. ... I would say the only time when it really doesn’t matter is when the seeding is truly set, which that’s definitely not the case at all,” tight end Rob Gronkowski said.

“If we want to get to the playoffs, we’ve got to win these games. ... You can’t look ahead of yourself,” Gronkowski added. “We’ve got to have good practices. We’ve got to know what we’re doing. We’ve got to prepare well. It’s basically playoffs every single week right now.”

The Bucs finish the season with a pair of games against NFC South rival Atlanta wrapped around a trip to Detroit on Dec. 26.

It’s not difficult to determine the most direct to the playoffs. Keep winning and they’re in.

“We’re very happy that we control our own destiny. That’s what we want — that’s all we could ask for. We’ve got to go out and do it,” receiver Mike Evans said. “We have the roster. We’ve just got to fine-tune some things and get hot at the right time, and I feel like we will.”

Despite cooling off Cousins, the defense had trouble getting off the field against the Vikings. While Minnesota was only 5 of 15 on third-down conversions, the Vikings were 4 of 5 on fourth downs and controlled the ball for just over 39 minutes to Tampa Bay’s 20:57. Dalvin Cook rushed for 102 yards and Minnesota gained 162 overall on the ground.

Veteran running back LeSean McCoy got his first significant playing time in weeks against Minnesota, rushing for 32 yards on four carries and adding one reception for 3 yards. Doesn’t sound like a lot of production, but most of it came on a drive Brady led to put the Bucs up 23-7 in the third quarter.

Running back Leonard Fournette was inactive despite being healthy. Although Arians said he’s not unhappy with Fournette’s recent play, the move created the opportunity for McCoy to have a bigger role in the game plan.

Arians said the team came out of Sunday’s game fairly healthy, although running back Ronald Jones may have a fractured pinkie finger. He said it happened early and Jones returned to finish the game.

900 — as in yards rushing for Jones. The third-year pro gained 80 on 18 carries against Minnesota to move closer to his first 1,000-yard season.

The Bucs play two of their remaining three games on the road, where they are 4-2 compared to 4-3 at home.