TAMPA, Fla. - The Tampa Bay Lightning Stanley Cup championship parade wrapped up after sailing through downtown Tampa for over two hours. Tens of thousands of Bolts fans hit the Tampa Riverwalk to celebrate the home team’s back-to-back Stanley Cup wins, and many more watched from the water.

The parade itself went smoothly but severe weather moved in just as the second half of the celebrations were getting underway. The event at Julian B. Lane was called off early as severe storms pounded the park with dangerous lightning and heavy rain.

Mother Nature's lightning will win this one: The rest of the celebration at Julian B. Lane Park has been canceled due to severe storms. 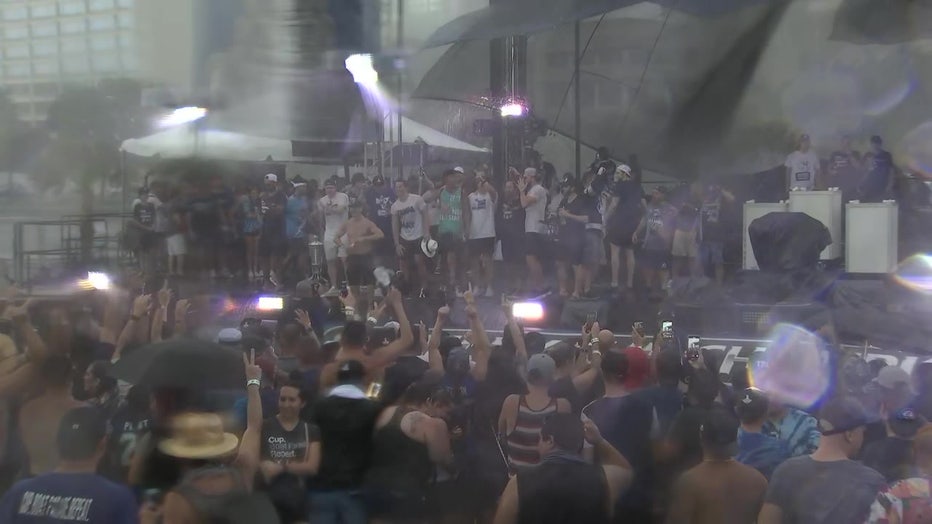 Earlier, the crowd did get a chance to cheer on the Stanley Cup. Steven Stamkos and others hoisted the cup despite the wind and rain, and Yanni Gourde took the opportunity to do some crowdsurfing.

Crowdsurfing in the rain

Yanni Gourde gets the already-soaked Julian B. Lane crowd into the celebration with a champagne shower and then some crowdsurfing.

Very heavy storms swept through Tampa not long after the parade ended, bringing near white-out conditions with blinding rain and dangerous lightning. Fans and players have taken cover at the Julian B. Lane celebration until the weather clears.

That's a parade! The players have begun unloading at Rick's after several hours on the water, concluding the parade portion of the celebration.

The boats are beginning to arrive at Rick's on the River, where the players will board buses for the quick ride back to Julian B. Lane. 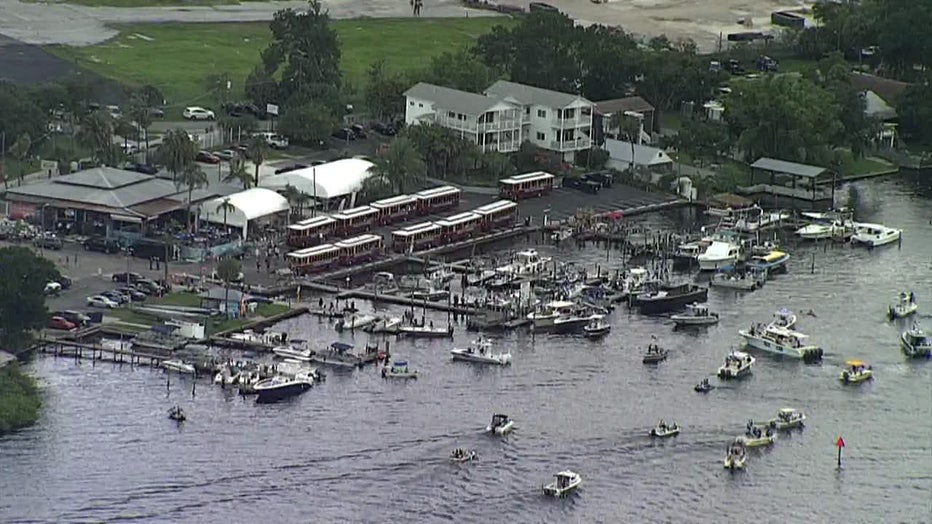 Crowds are beginning to gather at Julian B. Lane Riverfront Park where a post-parade celebration is planned. Vo Williams and Big Boi are expected to perform, weather permitting. 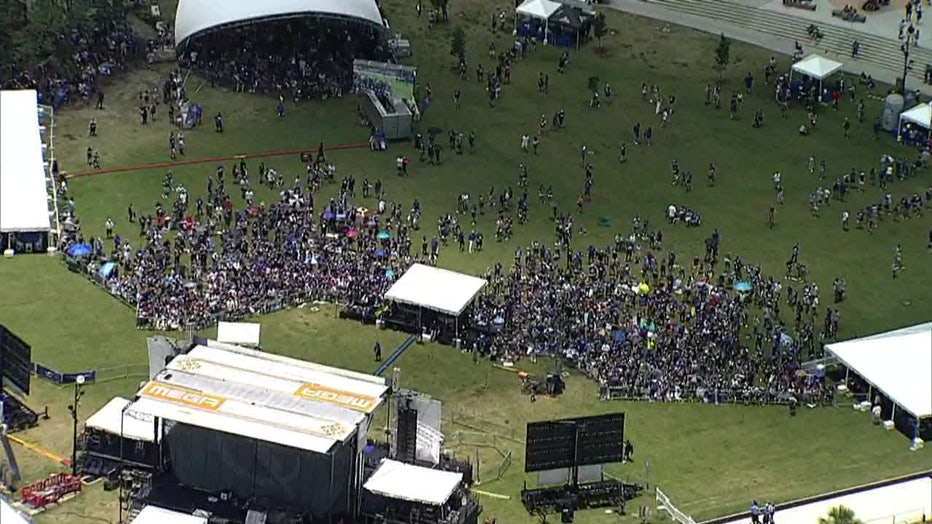 With the parade winding down, Nikita Kucherov takes a moment to speak to Josh Cascio, thanking fans for their support.

"I don’t know if there was any better parade ever," he tells Josh. "We love you all. Let’s keep partying hard. Let’s enjoy it. We deserve it."

Kuch says it was "unreal" to win the Stanley Cup at home, especially after winning in the COVID bubble last year.

"So many people in the stands, I couldn’t even hear myself," he continues. "It was unreal. I’m so happy we won."

Nikita Kucherov channels his inner Florida Man to thank fans for their support during the Stanley Cup run, and gives reporter Josh Cascio a taste of the celebrations, so to speak.

The parade is passing Armature Works, getting closer to the end of the route. But don't tell that to Yanni Gourde, whose one-man-show continues down the Hillsborough River.

Yanni Gourde give some Pirate Water Taxi passengers a ride to remember, blessing the boat with what appears to be multiple bottles of beer.

Ellis Allanson, a very special Rays and Lightning fan, is spotted by FOX 13 cameras amidst the celebrations.

The Tampa Bay Lightning invited Ellis Allanson, one of their biggest fans who gained notoriety for his dancing skills during the playoffs, to join them on one of their boats during their championship boat parade to celebrate their back-to-back Stanley Cup wins.

Partying continues, both along and on the Hillsborough River. The so-called Russian boat is a happening place, with the Conn Smythe Trophy and a Stanley Cup apparently made of beer cans.

The Russians are dancing

Andrei Vasilevskiy, Nikita Kucherov, Mikhail Sergachev break it down aboard their boat in the Lightning's Stanley Cup parade.

The parade is beginning to pass by Julian B. Lane Riverfront Park, where there will be a celebration later this afternoon. 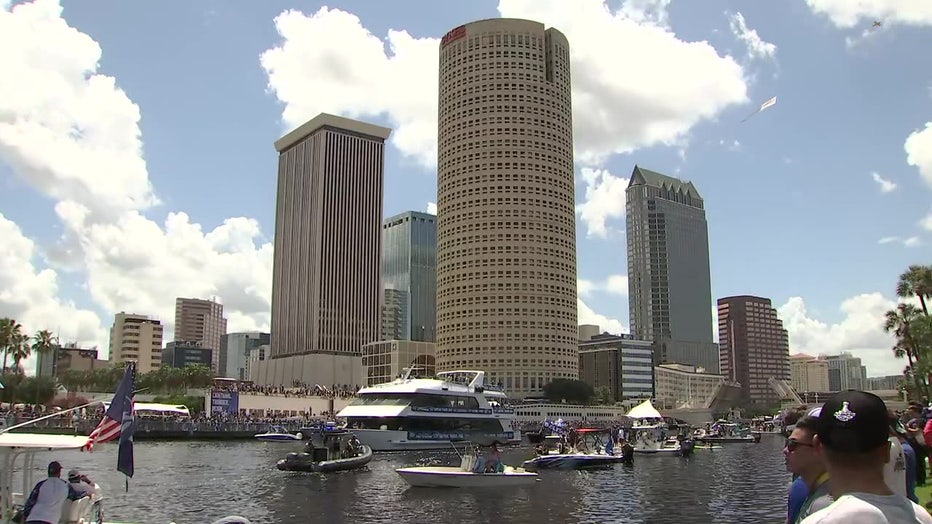 The Stanley Cup is back aboard Alex Killorn's water scooter, made famous during the pandemic. It should be noted that the cup was safely handed off; no tossing was involved.

The Tampa Bay Lightning celebrated their Stanley Cup win with a boat parade and Sir Stanley got to take a ride on a Sea-Doo to greet fans along the Hillsborough River waterline.

Meanwhile, Yanni Gourde just showed off his receiving ability (and his physique) while catching a beer thrown from another boat.

It's not Gronk and the Lombardi Trophy, but Yanni Gourde showed off his sure hands by snagging a beer tossed from boat to boat during the parade.

Lightning captain Steven Stamkos is pumping up fans by hoisting the Stanley Cup into the air as the fleet sails past Davis Islands.

Tampa Bay Lightning Captain Steven Stamkos hoisted the Stanley Cup during the championship boat parade along the Hillsborough River -- but not before giving Lord Stanley a kiss.

The view from SkyFOX shows hundreds of boats at the parade passes Davis Islands heading for downtown. 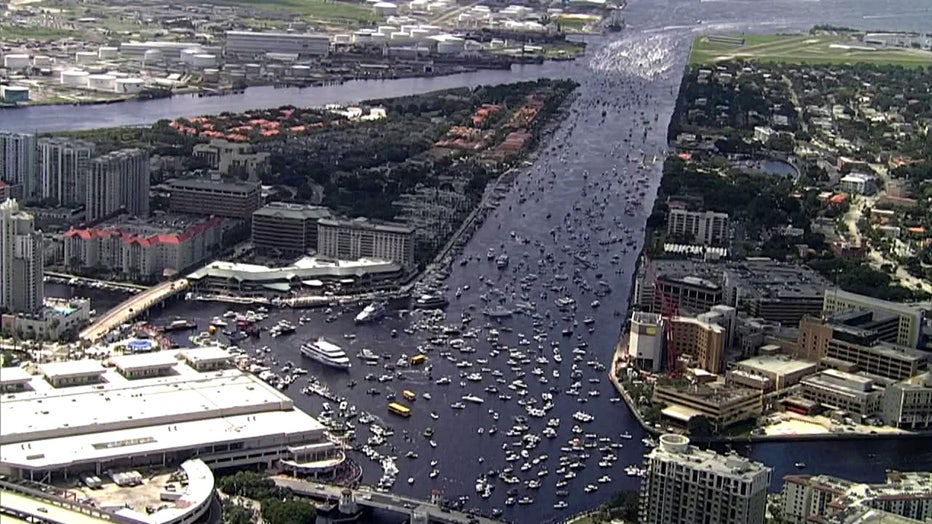 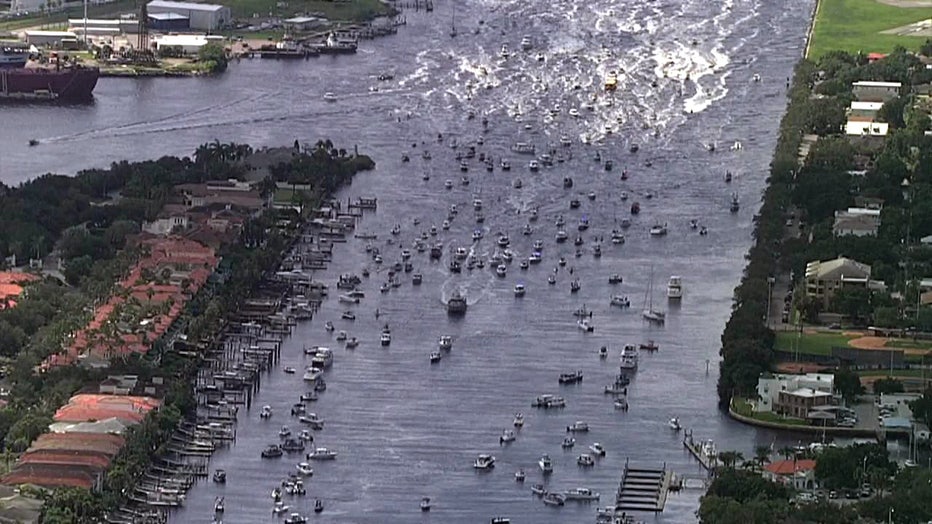 The boats are underway under blue skies in Tampa. FOX 13 meteorologist Dave Osterberg says storms are likely later, but should hold off for the parade. So one way or another, there will be lightning in Tampa Bay today. 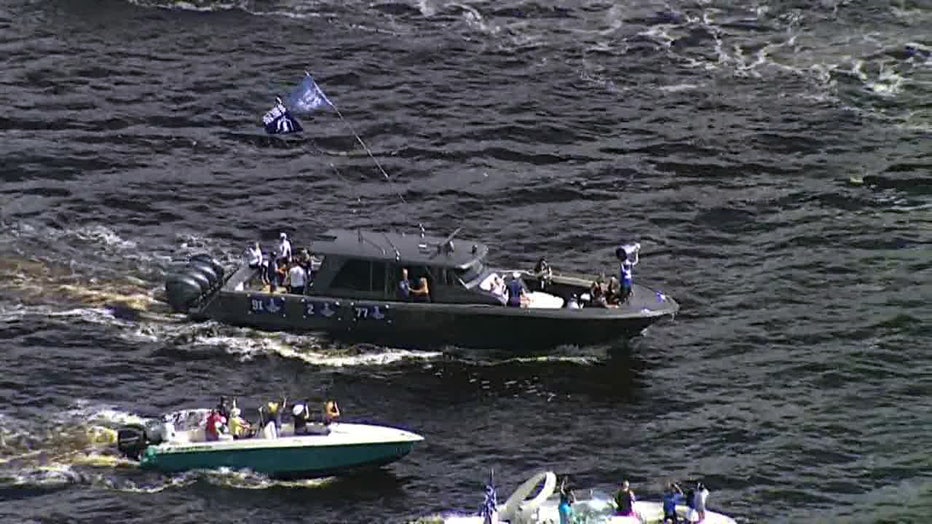 The Stanley Cup is aboard this black boat at the head of the parade.

Players have arrived by trolley and are beginning to board boats at Davis Island. Pat Maroon tells FOX 13's Josh Cascio that this parade will top last year's.

Bolts are charged up for parade

Pat Maroon promises this parade will top last year's, while Coach Jon Cooper says now it's up to the Bucs to repeat, too.

Players will begin assembling for the parade around 10 a.m. Monday at Marjorie Park.

At 11 a.m., the boat parade will kick off from the Davis Island Yacht Club heading north towards the Tampa Riverwalk. The route follows last year’s route heading past Harbor Island, the Convention Center, the Riverwalk, Curtis Hixon Park, Julian B. Lane Park, Water Works Park, and Armature Works. Then, they will dock at Rick’s on the River between noon and 1 p.m.

The park will open to fans at 9 a.m. No coolers or chairs will be allowed but there will be plenty of food trucks and entertainment, including performances by Vo Williams and Big Boi.

Tampa police said they have divers on hand in case anyone tries to repeat Tom Brady’s viral boat-to-boat trophy-tossing moment from the Buccaneers' Super Bowl parade earlier this year. The Lombardi Trophy, safely hauled in by the sure hands of Rob Gronkowski, weighs in at 7 pounds. However, Lord Stanley’s iconic cup is almost 35 pounds.

"We have divers. If Stanley takes a swim, we'll get him back in short order," Mayor Jane Castor quipped.