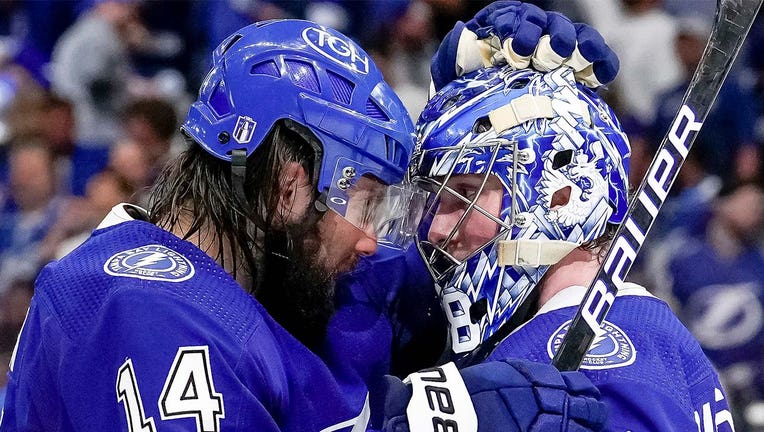 TAMPA, Fla. - The Tampa Bay Lightning delivered on a promise to play with a greater sense of urgency, storming back in the Eastern Conference Final against the New York Rangers and keeping their bid for a third straight Stanley Cup title alive.

Nikita Kucherov scored on a breakaway and Andrei Vasilevskiy had 33 saves Tuesday night, helping the two-time defending NHL champions shut down the Rangers 4-1 and even the best-of-seven series at two games apiece.

"We’ve got ourselves squared up in this series. It’s great, much better than the position we were in a couple days ago. But this is where it gets down to the really tough stuff," Lightning captain Steven Stamkos said.

"These next couple of games, we have to go on the road and we have to find a way to win a game in their barn," Stamkos added. "We’re looking forward to that challenge, but I really like where our game is now compared to where it was a couple days ago."

He has a love for hockey and a passion for rap. With his pregame presentations, Vo Williams has become the ultimate Lightning hype man.

READ: 'This is our house, and it is built by legends': Lightning hype man's new rap brings the energy

Kucherov took a pass from Ondrej Palat in the middle of the ice and skated in on goaltender Igor Shesterkin to give the Lightning a two-goal lead just over 13 minutes into the second period.

With Vasilevskiy back on his game following a slow start to the series, that turned out to be more than enough offensive support to hold off a Rangers team that’s suddenly found it difficult to score.

"They did a great job in the neutral zone. They collapsed pretty good in the ‘D’ zone. They blocked a lot of shots. They did the right things to win a hockey game," Rangers coach Gerard Gallant said of the Lightning.

Stamkos, Palat and Pat Maroon had goals for Tampa Bay, which has rebounded from losing the first two games of the series on the road to bolster its chances of becoming the first team in nearly 40 years to win three consecutive Stanley Cup championships.

Game 5 is Thursday night at Madison Square Garden, where the Rangers won Games 1 and 2 and are 8-1 this postseason.

"We’ve done a good job at home. I think if you look around the league a lot of teams play better in their home building," Gallant said.

"I’m disappointed tonight. I’m sure (the players) are," the coach added. "But it’s a best two out of three, we still have the home-ice advantage, so we have to make sure we’re ready for the next game. The next one is big."

Vasilevskiy stopped 28 of 30 shots to win Game 3 and was even better Tuesday night, when he extended a stretch in which he did not give up a goal to nearly 67 minutes before New York’s Artemi Panarin scored on the power play at 16:27 of the third period.

Until Vasilevskiy’s bid for a shutout ended, the Rangers hadn’t scored since Chris Kreider’s power-play goal put them up 2-0 at 9:44 of the second period in Game 3.

It has been all Tampa Bay since then, with Kucherov and Stamkos scoring to wipe out the Game 3 deficit before Palat won it in the final minute.

It was the third goal of the playoffs for Maroon, a 34-year-old, fourth-line forward who’s chasing a fourth consecutive Stanley Cup title after winning with St. Louis in 2019 and signing with Tampa Bay before the following season.

Stamkos’ goal built the lead to 3-0 early in the third period. Palat added an empty-netter with 8.7 seconds remaining, finishing with a goal and two assists.

"We’ve progressively gotten better, and I think we took some more positive steps tonight," Lightning coach Jon Cooper said. "We had a bit of a layoff, and I think now we’re starting to find our game. Now, we just have to keep this going in New York."

NOTES: The Rangers played without forward Ryan Strome (lower body), who was scratched after skating in pregame warmups. He was injured Sunday, when he exited in the second period after only playing a little over seven minutes. ... New York forward Filip Chytil left just past the midpoint of the second period after a hit by Lightning defenseman Victor Hedman. He missed the rest of the game with an upper-body injury. ... The Lightning played for the seventh straight game without forward Brayden Point, who has been out of the lineup since suffering a lower-body injury during Game 7 of Tampa Bay’s first-round victory over Toronto.