The team announced Thursday it will play its first two homestands through May 2 at TD Ballpark in Dunedin.

The move is due to COVID-19 travel restrictions between the US and Canada.

"It doesn’t diminish from our desire to back in Canada and Toronto, but it acknowledges that that’s just not a realistic possibility right now," said Blue Jays president and CEO Mark Shapiro. 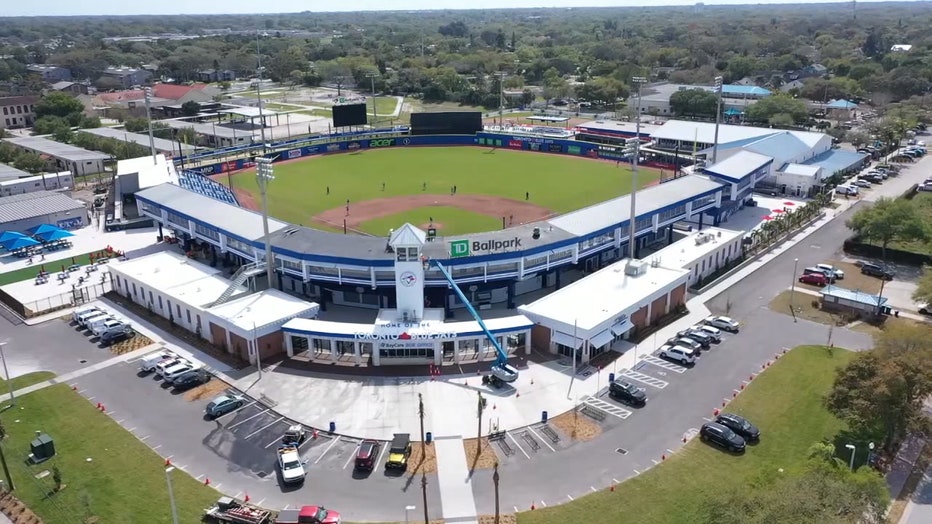 City Manager Jennifer Bramley says Dunedin will be rolling out the red carpet for the team.

"There has never been regular-season professional Major League Baseball in Dunedin, it’s a first for us," she said. "We’re thrilled, it’s a real shot in the arm for us it really is we're really excited to have them," she said.

The decision by the Blue Jays follows that of the NBA's Toronto Raptors. The team announced last week that it would play out its entire NBA season inside Tampa's Amalie Arena.

"Raptors, Blue Jays, The Super Bowl, any of those events really draws the spotlight to this region to this place that you can come and do things in a safe manner," said Visit Tampa Bay CEO Santiago Corrada.

Occupancy to be limited for spring training

At spring training fields here and throughout Florida and Arizona, crowd size will be limited and teams wonder if fans will show up like normal.

After starting the season with three-game series at the New York Yankees and Texas Rangers, Toronto’s schedule has a homestand with four games against the Los Angeles Angels from April 8-11 and the Yankees from April 12-14.

The Blue Jays follow with a trip to Kansas City, Boston and Tampa Bay, then have home games against Washington on April 27-28 and Atlanta from April 30 to May 2. That is followed by a 10-game trip to Oakland, Houston and Atlanta.

It remains unlikely they would gain approval to play May games in Toronto. A return home in the second half might be more realistic after players and large segments of the population in the U.S. and Canada are vaccinated.

The Blue Jays played home games during the shortened 2020 season in Buffalo, New York, and were 17-9 at Sahlen Field, home of their Buffalo Bisons Triple-A farm team. The Canadian government didn’t allow the team to play at home because of the risk of spreading COVID-19 due to frequent travel required during a baseball season.

The border remains closed to nonessential travelers who are not Canadian citizens; Canada requires those entering the country to isolate for 14 days. And starting Monday, air travelers who arrive in Canada will be forced to quarantine in a hotel for up to three nights as they await the result of a coronavirus test.

Ongoing challenges with the pandemic and how that affects the process of crossing the border between the U.S. and Canada will also keep the Toronto Raptors in their adopted Tampa, home for the remainder of the regular season, the NBA team said last week.

READ: Toronto Raptors will keep calling Tampa home for the rest of the season

The Blue Jays went 32-28 last season, finishing third in the AL East behind Tampa Bay and the Yankees and qualifying for the expanded 16-team postseason. The Blue Jays were swept in two games by the AL champion Rays in a first-round series.

The Associated Press and FOX 13 News contributed to this report.