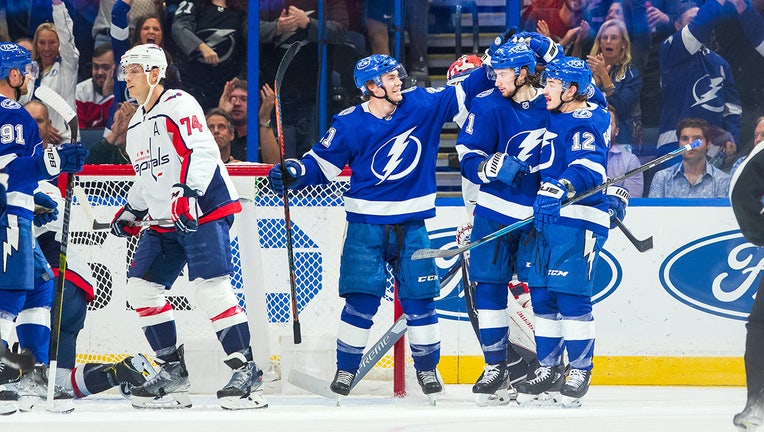 Anthony Cirelli celebrates a goal with teammates against the Washington Capitals during the second period at Amalie Arena on November 1, 2021 in Tampa, Florida. (Photo by Mark LoMoglio/NHLI via Getty Images)

Tampa Bay also got goals from Alex Killorn and Brayden Point. Taylor Raddysh picked up his first NHL point, coming in his eighth game, by assisting on Point's goal

Brett Leason got his first NHL goal and Conor Sheary also scored for the Capitals, who came in 5-0-3. Vitek Vanecek stopped 23 shots.

Ovechkin had a shot on goal and two more attempts from the top of the left circle blocked by Erik Cernak during a late first-period power play. He had a drive from the left circle during a 2-on-1 midway through the second stopped by Vasilevskiy.

Killorn and Cirelli had second-period goals as Tampa Bay took a 2-1 lead. Point put the Lightning ahead 3-1 at 2:56 of the third.

Leason scored 1:13 into the game when his shot from the right wing boards was redirected past Vasilevskiy off Lightning defenseman Victor Hedman’s stick. It came in his second game.

Vasilevskiy went post-to-post to make a nifty stop on Tom Wilson in the opening minute of the second period before Killorn tied it at 3:18 to extend his goal streak to four games.

"National Hockey League, full of the best players in the world, and there’s certain players that stand apart," Lightning coach Jon Cooper said of Ovechkin. "He’s one of them. He’s blessed with size and strength, and that shooter’s mentality. You’re watching a generational talent."