We're used to sports fans from Canada rolling deep in Tampa Bay, but an NBA team is about to change that game, even if it's just temporarily.

TAMPA, Fla. - Just like last year, the Toronto Raptors are opening the season at home, against the New Orleans Pelicans, and every available ticket for the game has been sold.

The Tampa era — it’ll last until at least early March, maybe the full season, nobody knows for certain yet — of Raptors basketball formally opens Wednesday night, when the team plays host to the Pelicans.

Unlike last season, when more than 20,000 fans crammed into Scotiabank Arena on opening night, Wednesday’s matchup is expected to draw a socially distanced 3,800, the maximum permitted right now at Tampa’s Amalie Arena according to the health and safety protocols put in to deal with the coronavirus pandemic. 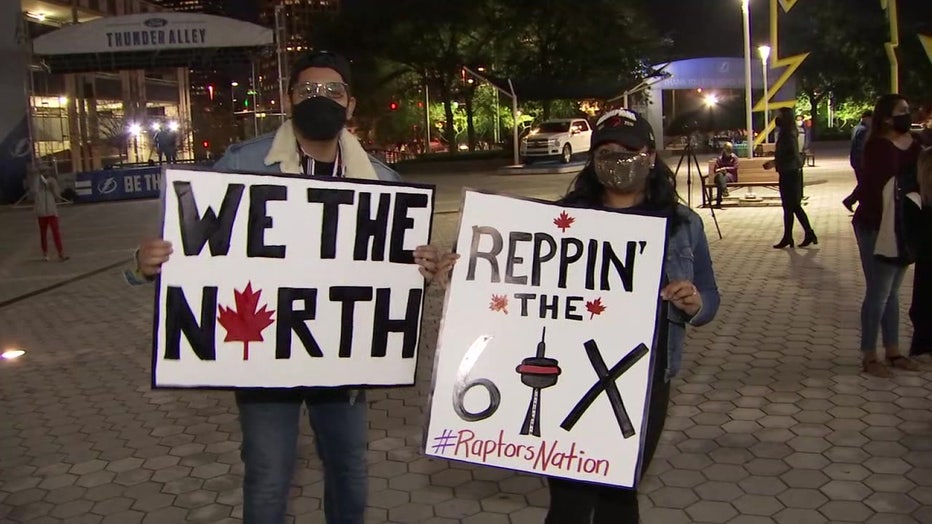 "We are all creatures of habit. Familiarity is where we thrive," said Teresa Resch, the Raptors’ vice president of basketball operations and one of the guiding forces behind the team’s move to Tampa. "And the more familiar you can make it, the more comfortable you are, the better you are able to perform and ultimately that’s what we’re trying to do here is we’re trying to grow as an organization and perform our best."

The Raptors and those who are assisting them in Tampa have tried to simulate the comforts the team has at home in Toronto, at least as much as possible. "We The North" signage is everywhere in the hotel that the Raptors will use as a practice facility, from the elevator doors to the ballroom wall behind one of the baskets. The court that the Raptors will use for games came from Toronto. And there’s a 2019 world championship banner swaying from the rafters — alongside the Tampa Bay Lightning’s retired jerseys for Vincent Lecavalier and Martin St. Louis — at the same end of the court as the Raptors’ bench.

The banner immediately caught the eye of Raptors coach Nick Nurse when he checked out the surroundings.

For the first time in nearly nine months, Amalie Arena will reopen for a sporting event on Friday.

The Raptors needed a new home because the U.S.-Canada border remains closed to almost all non-essential crossings because of the pandemic. Many cities lobbied; Tampa wound up being the pick in a move that added to a hectic sports year for the city which has seen the NHL’s Lightning win the Stanley Cup, baseball’s Rays reach the World Series and the NFL’s Buccaneers land Tom Brady in a season where Tampa also plays host to the Super Bowl.

"The Toronto Raptors and their fans will not be disappointed here in Tampa Bay," Tampa Mayor Jane Castor said

The last time Tampa was on the NBA’s schedule prior to this season was in 2010, when Miami and Orlando were supposed to meet there in a preseason game. The matchup wound up getting canceled shortly before game time because someone used an oil-based soap to clean the court and things got slippery.

This is already off to a better start.

The Raptors are raving about the arena setup. The practice facility, constructed in a hotel ballroom — very similar to what the NBA put into use during the summer restart at Walt Disney World — has many of the same things that the team has in Toronto. The Raptor mascot is performing at games, the starting lineups are announced the same way, and Nurse can walk to work now, which he enjoys.

"They did a great job with the facility," Raptors guard Fred VanVleet said. "For us, it’s a mixture of what we have in Toronto and what we experienced in the bubble. We kind of got brainwashed into practicing in ballrooms in the bubble and it became normal for us. This doesn’t feel all that different but it’s nice to see all of our Raptors stuff in here. They did a great job.

"There’s little things that we don’t have that we do at home ... but the people who put this together did a great job."

We're used to sports fans from Canada rolling deep in Tampa Bay, but an NBA team is about to change that game, even if it's just temporarily. The Toronto Raptors announced Friday that the team will begin its 2020-2021 season in Tampa.

This endeavor is not without hardship.

There are about 60 employees who moved from Toronto to Tampa, some with families, some without. Some arena workers in Toronto, who obviously haven’t had their game-night jobs since March, still don’t have them. And the move is costing the Raptors a small fortune; the NBA has some experience with helping in the scenario of a team being displaced — the last time it happened was in 2005-06 and 2006-07 when the New Orleans Hornets played in Oklahoma City following Hurricane Katrina — and will almost certainly cover some of those costs.

NBA Commissioner Adam Silver said he expects other team owners to support Toronto and what he called its "extraordinary circumstances."

"One thing wonderful about this league is that while the 30 teams’ goal is to crush each other on the court, off the court they’re business partners," Silver said. "I think it’s sort of the secret sauce behind the league’s success over the last decade in particular, sort of a generation of owners who are really fond of each other and want to work to support one another."

So, for now, "We The North" has gone south. At least 17 times in the next 2 ½ months, the Raptors will be calling a court in Tampa home.

They’re determined to make it work.

"It’s so cliché, but you have to make lemonade out of lemons," Resch said. "We would love to be playing in Toronto and playing in front of Toronto fans but we’re not. We’re here in Tampa. And you know what? We’ve got a beautiful arena, there’s beautiful sun. There’s definitely lemonade."