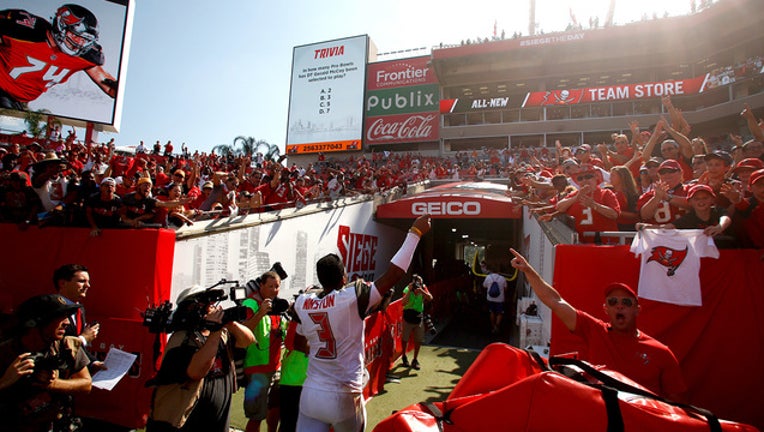 Quarterback Jameis Winston of the Tampa Bay Buccaneers celebrates following a 29-7 win over the Chicago Bears on September 17, 2017 at Raymond James Stadium in Tampa, Florida. (Photo by Brian Blanco/Getty Images)

TAMPA, Fla. (AP) - There's no room for complacency in Jameis Winston's bid to transform the Tampa Bay Buccaneers into a playoff team.

The 23-year-old quarterback shone in the team's delayed season opener Sunday, throwing for 204 yards and one touchdown in a 29-7 victory over the Chicago Bears.

An opportunistic defense did its part, too, forcing four first-half turnovers, scoring on an interception return and limiting the Bears to 20 yards rushing.

Winston was delighted, but not satisfied.

"The biggest takeaway is that there is a lot of room for improvement. We can't just sit on one game," the third-year pro said. "Me personally, I've just got that mentality that we've got to get better, we've got to keep pushing each other."

The Bucs (1-0) dominated despite having a short week of practice following a Hurricane Irma-imposed layoff that kept Tampa Bay from playing its scheduled season opener at Miami the previous week.

The team joined the Dolphins and Jacksonville Jaguars in wearing "ONE FLORIDA" decals on their helmets Sunday. First responders who've worked tirelessly in the aftermath of the massive storm were among special guests in the announced crowd of 56,640 at Raymond James Stadium.

"We had a chip on our shoulder. ... We wanted to be a pick-me-up for our fans, definitely the cities around the Tampa Bay area," Winston said. "It was fun out there. The crowd was electric, and we tried our best."

The defense stymied former teammate Mike Glennon with two interceptions and a sack-fumble that led to a second-quarter touchdown.

Glennon, who signed with Chicago as a free agent last winter, was 31 of 45 for 301 yards and two interceptions in his return to the city where he played for the first four years of his career . The Bears finished with 310 yards total offense, 1 yard less than a Bucs offense that hasn't had much work in the past month.

Some things to know about the Bucs and Bears:

QB CONTROVERSY? ... NOT YET

Bears coach John Fox said he didn't give any thought to benching Glennon and replacing with No. 2 overall draft pick Mitchell Trubisky.

"We have to get better as a football team," Fox said. "That wasn't the Mike Glennon's Bears, that was the Chicago Bears. It was our whole team. I haven't looked at all the stats and all the exacts, but there's a lot of people that had their hand in it. We'll leave it at that."

Glennon said he's not looking over his shoulder fearing he's on the verge of losing the starting job.

"There's been no communication of that, so there is no reason to worry," said Glennon, who was coming off a solid if not spectacular performance in the Bears' 23-17 season-opening loss to defending NFC champion Atlanta.

NO SIGNS OF RUST

By the time he lined up to face the Bears, Winston hadn't taken a snap in a game in three weeks. Eight regulars, including Evans, receiver DeSean Jackson, linebacker Kwon Alexander and defensive tackle Gerald McCoy, hadn't seen game action in a month.

The Bucs insisted, though, that they would not use rustiness as an excuse if they had a less-than-sharp debut. The way the Bears played, the layoff never had a chance to become an issue.

The Bucs limited the Bears to 20 yards rushing. While part of that could be attributed to Chicago falling behind early, it's fair to note that Tarik Cohen and Jordan Howard didn't have much room to run when they did get the ball. Cohen gained 13 yards on seven attempts, with 9 coming on one carry. Howard, who gained 100 yards during a lopsided loss to Tampa Bay last season, finished with 7 yards on nine attempts. As a tandem, Cohen and Howard averaged 1.3 yards per carry.

Jackson was Tampa Bay's big offseason acquisition. The speedy receiver, who had a 21-yard reception and finished with three catches for 39 yards, was signed in free agency in hopes of making the offense more explosive.

"DeSean was effective ... We weren't able to get him over the top, but that's coming," coach Dirk Koetter said. "We'll get it."