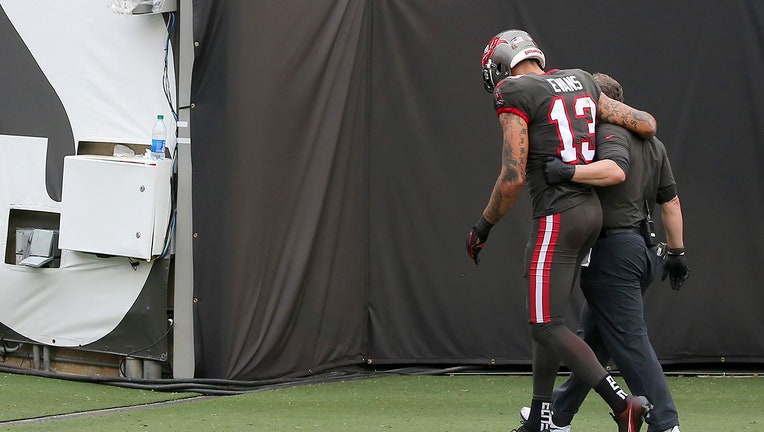 Mike Evans (13) of the Buccaneers is helped off the field and to the locker room by a trainer during the regular season game between the Atlanta Falcons and the Tampa Bay Buccaneers on January 03, 2021 at Raymond James Stadium in Tampa, Florida. (Pho

TAMPA, Fla. - Mike Evans’ status for Tampa Bay’s first playoff game in 13 years is uncertain, though his left knee injury does not appear to be as serious as the Buccaneers initially feared.

Coach Bruce Arians said an MRI showed no structural damage and the star receiver is day to day for Saturday night’s NFC wild-card game at Washington.

Evans was hurt during the team’s regular-season finale against Atlanta, going down one play after a catch that made him the first player in NFL history to begin a career with seven consecutive 1,000-yard seasons.

Arians described the injury as a hyperextension and said he hopes Evans will be able to join the team on the practice field as early as Thursday.

If Evans is unable to play, it would be a blow to an offense that’s playing its best ball of the season entering the playoffs.

But if Sunday’s performance against the Falcons is any indication, even without Evans the Bucs have plenty of playmakers to help Tom Brady win.

Antonio Brown shifted into the lead receiver role and had a season-high 11 receptions for 138 yards and two touchdowns. Chris Godwin had five catches for 133 yards and two TDs, and the production didn’t stop with those two as Brady threw for 399 yards and four TDs in a 44-27 win.

Receiver Scotty Miller contributed, tight ends Rob Gronkowski and Cameron Brate did their part, and running backs Ronald Jones and Leonard Fournette teamed to rush for 91 yards and a TD.

"It’s just kind of what we do, right? Coach always talks about ‘next man up’ and that’s something we live by in this locker room," said linebacker Kevin Minter, who filled in for Devin White after the second-year pro was placed on the COVID-19 reserve list last week.

"Regardless of who is down, no excuses. We are all Bucs and we all have a goal in mind, we all trying to get that championship," Minter added. "So regardless of who’s playing, you need to strap the helmet on and go."

The offense has been virtually been unstoppable over the past two-and-a-half games. Granted, the 10-quarter stretch was against struggling Detroit and Atlanta, which lost to Tampa Bay twice in the last three weeks of the season.

The Bucs didn’t punt against the Falcons, and Brady has thrown for 1,067 yards and 10 touchdowns over the last eight quarters he’s played.

"We’ve got a good grasp of what we’re doing offensively. I’m not sure how many times we’ve punted since the second half of the first Atlanta game, but Atlanta’s a quality football team," Arians said.

"We can’t worry about who we played," the coach added. "All football teams can beat you on Sunday, so you better be ready."

Defense carried the Bucs early. In four games since the team’s bye week, though, the offense has been lighting up the scoreboard. Tampa Bay finished with the league’s stingiest run defense; however, the secondary is going to have to reestablish itself to make a deep playoff run.

Arians called Brown an "insurance policy" when the Bucs signed the former Steelers, Raiders and Patriots receiver, who was coming off an eight-game suspension for violating the NFL’s personal conduct policy. The 10th-year pro has four TDs in the past three weeks and figures to continue to play a significant role, especially if Evans isn’t fully healthy.

The Bucs played bend-but-don’t-break defense against the Falcons, who controlled the ball for long stretches. That could be problematic if the trend continues against stiffer competition.

Arians thinks cornerback Carlton Davis (groin) will be ready Saturday after sitting out two games. The Bucs likely will have to play without White and maybe backup nose tackle Steve McLendon, who remain on the COVID-19 list. Linebacker Shaquil Barrett was placed on the COVID-19 list last week, too, but Arians expects him to play against Washington.