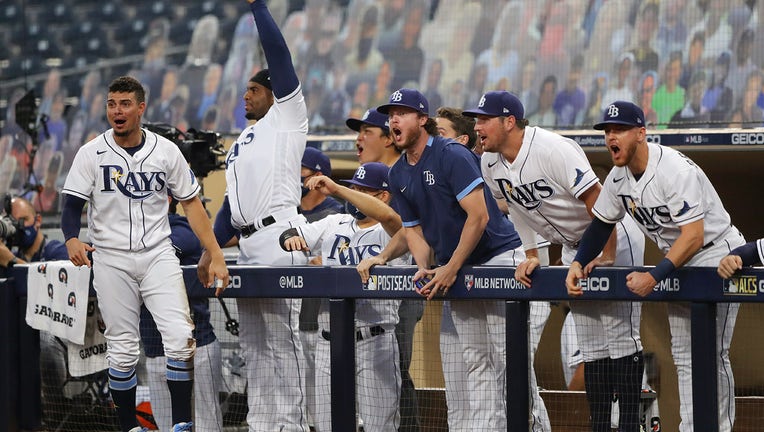 Members of the Tampa Bay Rays celebrate in the dugout after Mike Zunino hits a home run in the second inning during Game 7 of the ALCS. (Photo by Alex Trautwig/MLB Photos via Getty Images)

TAMPA, Fla. - One of the biggest differences between the Rays and Dodgers this postseason is their payroll.

The Los Angeles Dodgers’ payroll this season is $107.91 million, second in the majors only to the Yankees.

“The Rays, in baseball terms, do more with less than any other team in baseball and it’s not even close,” said local sport talk radio host Tom Krasniqi of 620 WDAE.

There is more math to be done.  Clayton Kershaw and Mookie Betts have pro-rated salaries that combine to more than $26.3 million -- that’s nearly the Rays’ entire payroll, spent on two players.

It is going to be a big night for baseball fans in the Tampa Bay area. The Rays are going to be playing the Los Angeles Dodgers in the first game of the World Series on Tuesday night.

“Other teams can go to Neimen Marcus or Saks 5th Avenue. That’s not the Rays’ way.  They'll go to BJ’s, Ross, Walmart and they can find useful items,” Krasniqi offered.

The discrepancy in payroll basically comes down to market size.  L.A. is much larger than Tampa Bay.  However, as we’ve seen thus far, when it comes to play on the field “money ain’t everything.”

“It is unprecedented, never been seen before. I’m expecting a big win and it'll be great for this community,” added Rays analyst Orestes Destrade.

Game One of the World Series airs tonight at 8 on FOX 13.