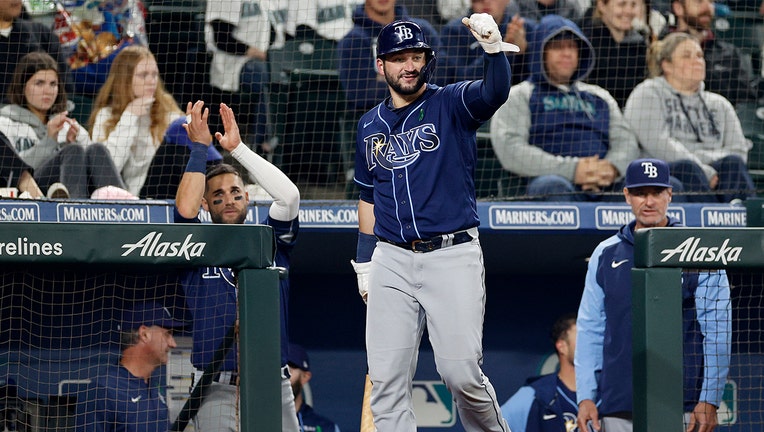 SEATTLE, WASHINGTON - MAY 05: Mike Zunino #10 of the Tampa Bay Rays reacts after an RBI single by Harold Ramirez #43 against the Seattle Mariners during the fourth inning at T-Mobile Park on May 05, 2022 in Seattle, Washington. (Photo by Steph Chambe

TAMPA, Fla. - After making a few adjustments in his swing during the last homestand, Tampa Bay’s Mike Zunino is starting to see better results. The proof came against his former team.

Zunino hit a three-run homer off Robbie Ray, Shane McClanahan held Seattle hitless into the fifth inning and the Rays beat the Mariners 4-3 Thursday night for their fourth straight win.

Tampa Bay received all the offense it would need thanks to one swing from the former Mariners catcher. Zunino entered the game batting just .135, but he hit his third homer of the season in the fourth inning. It was Zunino’s fourth homer in 10 games against the team he spent his first six seasons playing for.

"He’s got such great stuff. He doesn’t let you breathe much," Zunino said. "The fastball is always in, the slider is right under it. You just got to pick a spot and try to hunt it."

Harold Ramirez also had an RBI single as part of the four-run inning for Tampa Bay.

All the offense for Tampa Bay came in one inning, meaning McClanahan had to match last year’s AL Cy Young Award winner.

McClanahan was overpowering early, received some terrific defensive help and kept Seattle’s slumping offense in a funk. The only hits Seattle managed off the hard-throwing lefty were Jesse Winker’s first homer of the season in the fifth inning and consecutive singles by Ty France and J.P. Crawford in the sixth that ended McClanahan’s night.

McClanahan (2-2) has allowed three earned runs or fewer in all six of his starts. He struck out five and walked two.

"It was a weird night. I felt good and just couldn’t find that rhythm," McClanahan said. "Ultimately I had to battle and push through."

Isaac Paredes saved a run in the third inning with a diving stop to rob France of a hit. Taylor Walls made a spinning stop on Eugenio Suarez an inning later to rob a hit.

"I owe those guys a drink or two," McClanahan said.

Jason Adam allowed an RBI single to Suarez in the sixth inning and Adam Frazier hit his first home run for Seattle on the first pitch from Colin Poche in the seventh. Poche pitched a clean eighth inning and Brooks Raley worked the ninth for his second save.

It was the third straight one-run victory by the Rays over Seattle after taking two of three games last week at home. Seattle has lost eight of nine overall and has scored more than three runs only twice during that stretch.

Ray (2-3) threw 6 2/3 innings and struck out five but suffered his second straight loss. He relied mostly on his fastball at the end of his outing when he retired eight of the final 10 batters he faced.

"It feels like my timing is maybe just a little bit off," Ray said. "But when it’s on, I mean, I felt like that last inning it started to click a little bit and I was able to reach back and get some more. So I think for me the fastball just felt good."

Rays: Tampa Bay started to get players and coaches back from its recent COVID-19 outbreak. C Francisco Mejía was reinstated from the virus list Thursday and likely will be back in the lineup on Friday. The Rays also welcomed back bench coach Matt Quatraro and pitching coach Kyle Snyder.

Bullpen coach Stan Boroski and field coordinator Paul Hoover remain out due to the virus.

Mariners: Seattle had a flurry of roster moves that included optioning RHP Matt Brash to Triple-A Tacoma and move him to the bullpen. The Mariners also placed RHP Matt Festa on the 15-day injured list due to tendinitis in his right elbow. Right-hander Riley O’Brien was recalled and lefty Danny Young was selected from Tacoma.

Rays: Tampa Bay is expected to use an opener Friday.

Mariners: RHP Logan Gilbert will make his sixth start and his first after being named the AL pitcher of the month for April. Gilbert was 4-0 with a 0.64 ERA in April. He threw 5 2/3 innings allowing one run in his last start against Miami.