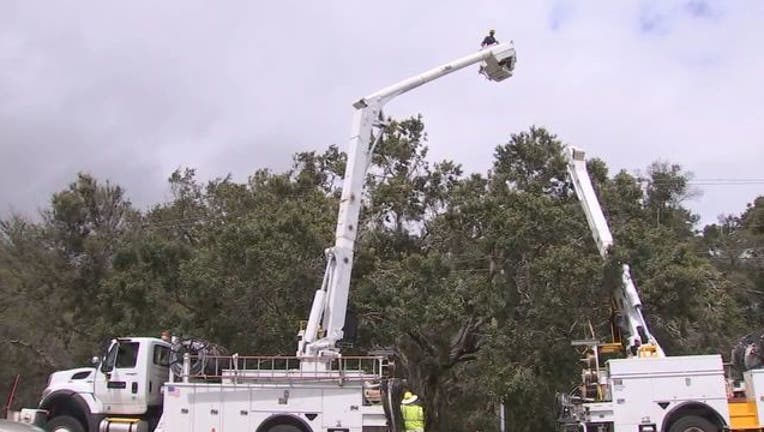 TAMPA (FOX 13) - As of late Sunday night, Duke Energy announced it has restored power to 98 percent of its customers in Pinellas and Pasco counties.

The revised estimated restoration times are as follows:

- By 11 p.m. on Tuesday, Sept. 19 – The severely impacted areas of Hardee, Highlands, Lake, Polk and Volusia counties. Also the northern Orange and Lake County border due to rebuilding the electrical system that suffered significant damage in those areas.

In some cases, service may be delayed in areas impacted by tornadoes, heavy tree and debris damage, and where a meter or other customer equipment was damaged and requires repair and an inspection.

"To the many people who have given a 'shout out' to our lineman and expressed their appreciation, we thank you," said Harry Sideris, Duke Energy Florida state president. "At the same time, we deeply apologize for not meeting our customers' expectations. They expect and deserve better from us. Our customers are angry and frustrated that we could not provide them better information. I want to reassure them that we have not stopped and will not stop until our customers are restored."

St. Petersburg mayor Rick Kriseman said he was disappointed by the missed deadline, but recognizes the progress they've made. He asked for residents to post on his Facebook page whether they're power has not been restored and where. He said he will provide the information to Duke Energy.

The company said its online outage map wasn't providing the correction outage totals. For latest outage information and other company updates, visit news.duke-energy.com/irma or take a look at their outages-by-county report.

Duke Energy said it has also updated its phone systems to help customers reach customer care quicker. The customer care number is 800-228-8485. Customers now have an immediate option to speak to a customer care representative.