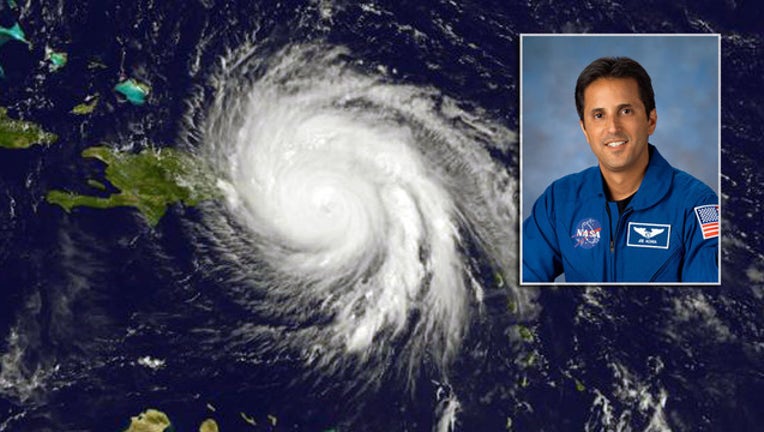 CAPE CANAVERAL, Fla. (AP) - Space station astronaut Joe Acaba is getting a double dose of hurricanes - even in orbit.

In an interview with The Associated Press on Wednesday, the first astronaut of Puerto Rican heritage offered words of comfort to family members and everyone else during the wrath of Hurricane Maria.

"My parents were born there, so a lot of relatives, cousins, godparents" are still in Puerto Rico, Acaba said. "I hope everyone's doing well and that you take care of yourselves."

Acaba, a former teacher who arrived at the International Space Station last week, said he had not yet seen the hurricane from space. The storm made landfall at Puerto Rico an hour before the TV interview.

"It's kind of hard to believe, but you get so busy in the day working so hard that at times you forget to look out the window," said Acaba, who is on his third spaceflight and his second visit to the space station.

Acaba was in Russia then, getting ready for his launch, when his home flooded in Houston. Friends and colleagues came to his rescue, yanking out walls and drying out his house.

"It was a huge relief to know that there were people at home, taking care of me," he said.

Fellow NASA astronaut Mark Vande Hei's home in Houston fared much better. It's tough being in space when you want to help those back home, he said, but all the help to the astronauts' families from Johnson Space Center colleagues has been "hugely appreciated."

Acaba took Puerto Rican flags up with him.

"No Puerto Rican can travel without their Puerto Rican flags, so I have my share of those. And pretty soon, the space station's going to start looking like Puerto Rico with all the flags," he said.

Acaba's parents were from Hatillo, Puerto Rico, and, while young, moved to the U.S. Born and raised in Southern California, Acaba served in the Marine Corps Reserves, volunteered for the Peace Corps in the Dominican Republic and worked as a hydro-geologist before becoming a science and math teacher in Florida.

NASA chose Acaba in its first official group of astronaut-educators in 2004 along with Richard Arnold, who will make another trip to the space station in March, a month after Acaba departs. The two will make short video clips and use social media to reach out to youngsters.

"For all of us, it's a dream come true and we want them to believe the same," he said. He added: "As much as we can do to help the great teachers out there, we're going to try to do that."

Meanwhile, Nespoli, in orbit since July, said he misses sharing pizza with friends. He recently dug out the space station's espresso machine, an Italian experiment from two years ago. He brought up some coffee capsules to try.

After weeks of instant space coffee, "a really good espresso would make a difference."