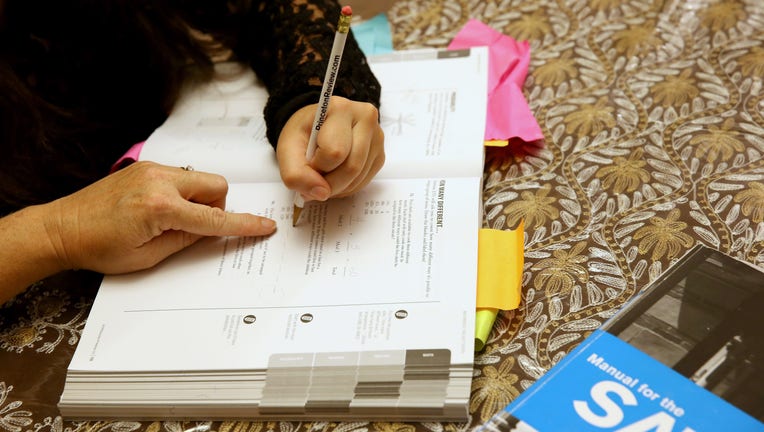 PHOENIX - On Jan. 25, officials with SAT say the annual college entrance examination will move to a digital format, saying the shift will boost its relevancy as more colleges make standardized tests optional for admission.

Here's what you need to know about the changes that will be made.

How will the exam change?

According to officials with College Board, the organization responsible for the SAT, the annual exam will move to a digital format.

In addition, officials say tests will be shorter, with tests lasting about two hour instead of three for the current SAT iteration. There will also be more time allotted per question.

"The digital test will feature shorter reading passages with one question tied to each, and passages will reflect a wider range of topics that represent the works students read in college," read a portion of the statement.

College Board officials also say calculators will be allowed on the entire math section of the exam. Currently, There is a part of the math section that does not allow the use of a calculator.

Exam scores, according to officials, will be reported in a matter of days, rather than weeks. Scores from the digital test will also connect students to information on two-year colleges, careers, and workforce training programs.

Why are they moving to a digital format?

College Board officials say they piloted a digital version of the SAT in the U.S. and internationally in November 2021, and 80% of the students responded that they found it to be less stressful, and 100% of educations reported having a positive experience.

Officials also say the move to digital will make the exam more secure.

"With the current paper and pencil SAT, if one test form is compromised it can mean canceling administrations or canceling scores for a whole group of students. Going digital allows every student to receive a unique test form, so it will be practically impossible to share answers," read a portion of the statement.

Are they changing the score scale?

College Board officials say the exam will still be scored on a 1,600 scale.

Will the digital score still mean the same as the same score on a paper-and-pencil test?

College Board officials say, for example, a 1050 score on the digital SAT will still correspond to a score of 1050 on the paper-and-pencil SAT.

How will students take the exam?

On the FAQ page, College Board officials say students will take the test on a laptop or a tablet, using a 'custom-built digital exam application' that students will download ahead of test day.

So, does this mean students are taking the SAT exam from home?

According to College Board officials, the exam will still be administered in a school or in a test center with a proctor present.

What happens if a student does not have a device to take the test on?

Officials with College Board say they can request to borrow one, and a device will be provided for them on test day.

What happens if the internet goes out on test day?

College Board officials say if the internet goes out during the test, students will still be able to progress with no disruption.

"We’ve built the exam application to withstand internet outages," read a portion of the FAQ.

College Board officials also say if a computer runs out of battery, a student can plug the computer in, restart the device, and pick up where they left off.

"All their work will be saved, and they won’t lose testing time," read a portion of the FAQ.

When will the changes be made?

On an FAQ page regarding the pending changes, officials with the College Board laid out a multi-year schedule.

Can a student opt for the paper-and-pencil version in the future?

On the FAQ page, officials with the College Board say once they are done with the transition to digital, they will no longer offer a paper-and-pencil version of the test.

Does the SAT still matter?

Nearly 80% of bachelor’s degree-granting institutions are not requiring test scores from students applying for fall 2022, according to a December tally by the National Center for Fair & Open Testing, a watchdog group that opposes standardized testing.

The group, known as FairTest, said at least 1,400 of them have extended the policy through at least the fall 2023 admissions cycle.

In Arizona, Arizona State University, Northern Arizona University and University of Arizona do not require either the SAT or ACT exams for admission. However, all three public universities say students can still submit their score as supplemental information.

College Board officials, however, say millions of students still took the SAT.

"Most students want to take the SAT, find out how they did, and then decide whether they want to submit their scores to colleges," read a portion of the FAQ. "When surveyed, 83% of students said they want the option to submit test scores to colleges. This finding remains consistent whether or not students have taken the SAT and across race/ethnicity and parents’ level of education."

The Associated Press (AP) contributed to this report. This story was reported on from Phoenix.