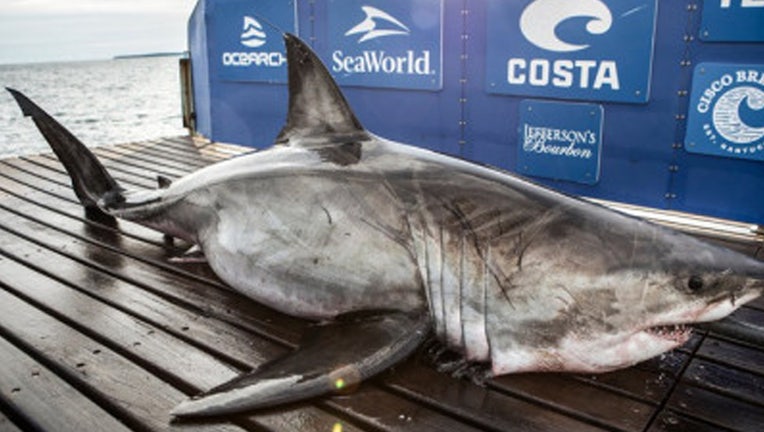 'Edithe' as seen while being tagged off the Canadian coast last year. Photo by Chris Ross courtesy OCEARCH.

TAMPA, Fla. - This week, everything from orcas to humpback whales were spotted in the Gulf of Mexico. Now, one of OCEARCH’s tagged sharks is paying a visit to Florida’s Gulf Coast.

Edithe, a nearly 12-foot-long great white shark, has pinged about 30 miles west of Tampa Bay several times in the last few days after spending most of March in the northern Gulf of Mexico.

OCEARCH’s researchers tagged her off the coast of Nova Scotia last October. Since then, she has traveled down the Atlantic coast, through the Florida Straits, then up to the Alabama-Mississippi line before turning back towards Tampa. 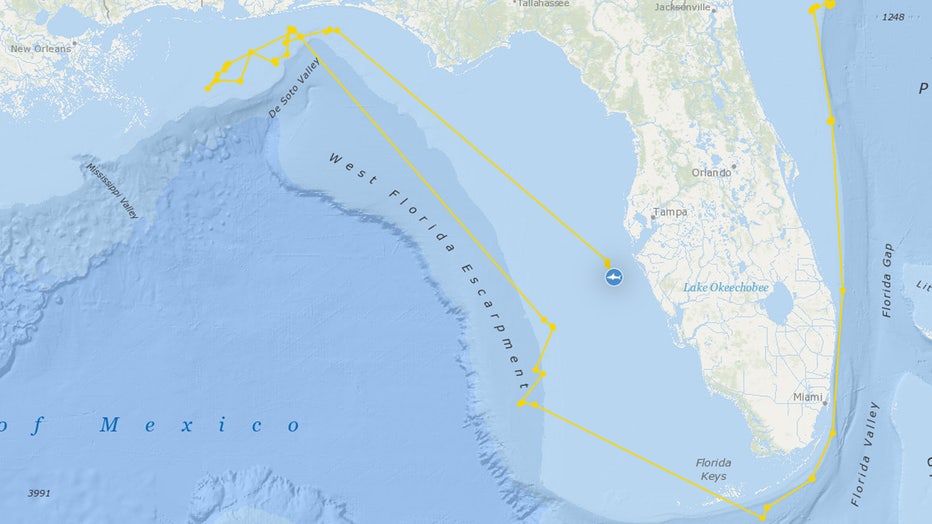 Edithe's track in yellow, along with her current position west of Manatee County. Courtesy OCEARCH.

OCEARCH is a data-centric organization that helps scientists by tracking oceanic wildlife, with tags on whales, dolphins and turtles, in addition to sharks.

"Edithe was the eighth and final shark tagged on OCEARCH’s expedition Nova Scotia 2020," OCEARCH explains on its website. "Edithe was named by first year master’s student Joseph Fotso from the University of Windsor who was part of the expedition crew for the entire trip. Joseph chose to name Edithe after his mother."

Edithe was 11 feet, 8 inches and 1,185 pounds when she was tagged. The group tracks even larger great whites, including Unama'ki, a 15-foot female who weighs over a ton. She’s also currently in the Gulf, a little further south.

LINK: Track Edithe and other oceanic wildlife on OCEARCH's website

Nicholas Lynch has been fishing his whole life, but this week, he captured incredible video of something few people will ever get to see in the Gulf of Mexico: a humpback whale breaching the water.

The boaters were fishing about 65 miles off the coast of the Tampa Bay area when a massive great white shark approached, taking a bite out of one of their boat's motors.

Great white sharks are moving to Florida for the winter

Like snowbirds, there's another group that's moving the Florida for the winter: sharks.