TAMPA, Fla. - Soon after Cameron Herrin was sentenced to 24 years in prison in 2021, State Attorney Andrew Warren – more than a year before he was suspended by Gov. Ron DeSantis – left a voicemail for the 22-year-old's attorney.

"Hey, John. It's Andrew Warren. It's about 4:30 on Friday. I just wanted to reach out and follow up after yesterday. Um, I, yes, call me at your convenience. Nothing urgent. Just wanted to share my thoughts on what happened yesterday. I tell ya, I was, uh surprised and even disappointed by the sentence. I thought it was excessively harsh. Um, but just wanted to follow up with you when you get a chance. This is my cell phone [redacted]. Uh, call me at your convenience."

That is according to a new motion filed Tuesday to reduce Herrin's sentence, which used Warren's comments to Herrin's lawyer as a supporting reason. Herrin was convicted of hitting and killing a mother and her baby while street racing on Bayshore Boulevard when he was 18, The deadly crash occurred in 2018.

In April 2021, a judge handed down the 24-year sentence, 6 years short of the maximum of 30. At the time, Herrin's attorney, John Fitzgibbons, called his client’s sentence excessive. According to the new court filing, Warren agreed. But, an appeals court upheld the sentence in June of this year.

LINK: Read the full court document below or click here

Fitzgibbons had 60 days to request a new sentence following the ruling. Tuesday's motion is part of that new effort. He notes this is Herrin's "final opportunity" for a modified sentence.

The following Monday, Fitzgibbons said he returned Warren's phone call, and they discussed the prison sentence. According to the motion, Warren said it was "terrible sentencing" and the prison term was "egregiously high."

"Mr. Warren further stated that he thought a 10-12 year sentence would have been appropriate and specifically stated that a 10-year sentence would be ‘OK,'" Fitzgibbons wrote. The undersigned reminded Mr. Warren that prior to entering a guilty plea the defense had asked the State during plea negotiations for a sentencing cap of 10 years, then 15 years, then 18.5 years and the State had declined to accept any of the defense offers." 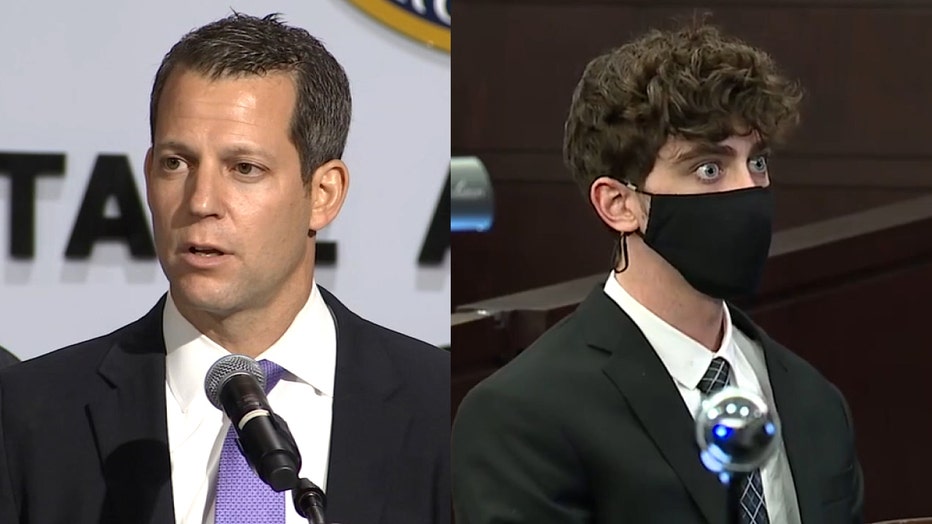 When asked if Warren would join the defense for any future motions to reduce Herrin's sentencing, "no commitment was made by Mr. Warren at that time."

On April 28, 2021, Fitzgibbons said he spoke to Warren again, and the state attorney declined to join the defense's efforts. Herrin's lawyer went on to say he would subpoena Warren to a hearing, requiring him to testify his opinions about the chosen sentence.

"Mr. Warren stated that he did not think his opinions were relevant," Fitzgibbons wrote in the motion, adding that "as the chief law enforcement officer in Hillsborough County his opinions were very relevant."

Ousted Hillsborough State Attorney Andrew Warren is gearing up for a fight to get his job back.

Meanwhile, Gov. Ron DeSantis recently suspended Warren as state attorney, he violated his oath of office and has been soft on crime.

In May 2018, Jessica Raubenolt and her one-year-old daughter Lillia were killed on Bayshore Boulevard.

Herrin and fellow Tampa Catholic High School student John Barrineau -- now both in their 20s -- were racing on Bayshore Boulevard. Jessica was crossing the road, pushing her 20-month-old daughter in a stroller when Herrin slammed into her in a new Ford Mustang, a recent graduation present. Raubenolt died instantly and baby Lillia died a day later.

Coverage from July 2021: Cameron Herrin has been sentenced to prison for his role in the street-racing crash that killed a mother and baby along Tampa’s Bayshore Boulevard in 2018. Herrin agreed to plead guilty to vehicular homicide charges. As the driver who struck the pedestrians, he faced up to 30 years in prison. In April of 2021, Hillsborough Circuit Judge Christopher Nash decided to sentence him to 24 years. The judge said Herrin’s track record of excessive speeding contributed to the decision. Herrin’s attorney says he plans to appeal.

In the three years since, the wheels of justice seemed to turn slowly as the prosecution and defense battled over everything from the admission of evidence to how the young men would plead.

Days before Christmas of 2019, Jessica Raubenolt's husband, David Raubenolt made a distraught plea for the judge to remove lengthy barriers in the way of the case going to trial.

A man who lost his toddler daughter and young wife in a crash related to racing on Bayshore Boulevard gave emotional victim's testimony at the sentencing hearing for one of the defendants.

Barrineau cut a deal with the state in exchange for his cooperation and was sentenced to six years in prison. Herrin entered an open guilty plea, meaning Judge Christopher Nash ultimately decided his sentence – not a jury.

State guidelines suggested Herrin could get 18 years of prison time, though his lawyer argued for less.