TAMPA, Fla. - Fired by Governor Ron DeSantis nearly a week ago, ousted Hillsborough State Attorney Andrew Warren is now preparing to mount a legal fight to get his job back.

As everyone waits to see what Warren’s first legal move will be, a respected constitutional lawyer is now weighing in.

Bruce Rogow is a first amendment and constitutional lawyer in Florida. He has argued 11 cases before the U.S. Supreme court. He recently defended Roger Stone in his federal case. He says what happened to Warren is unprecedented and an attack on the voters of Hillsborough County.

"It has been hijacked! You vote, your person is elected, and then the governor comes in and in effect dis-elects him that’s pretty extraordinary," explained Rogow.

Rogow says Warren can look for relief in either state or federal court. He can also have a senate trial.

A day after being suspended by Florida Governor Ron DeSantis, Andrew Warren says he will fight to get his job back.

"He can make an argument that he’s being removed for exercising his first amendment rights to speak his mind," Rogow stated.

Although he does acknowledge Warren may have the deck stacked against him in a senate trial, considering the Republican majority may uphold the governor’s decision.

Last Thursday, the governor dropped a bombshell when he fired Warren accusing him of neglect of duty and not following the law. It stems from Warren's pledge not to criminalize minors seeking a sex change operation. Which is not a current law in the state. 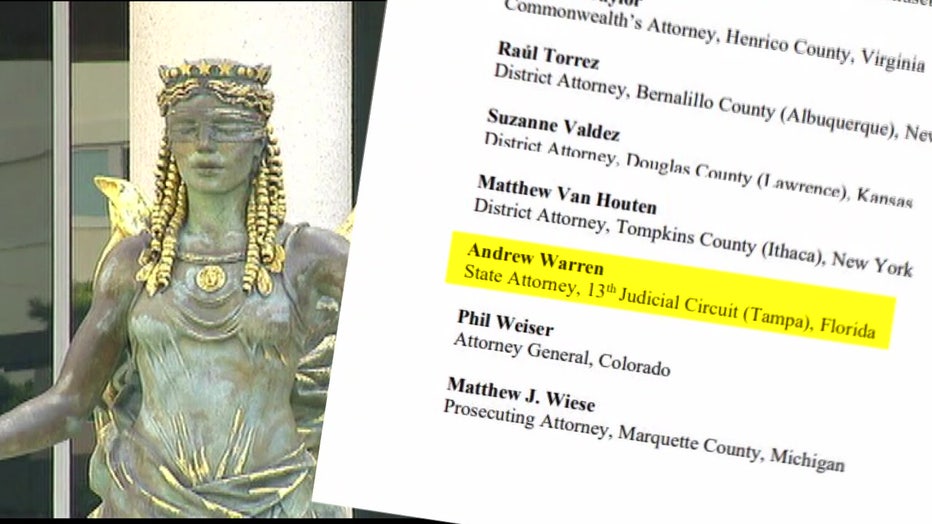 Andrew Warren's name on pledge to not prosecute those seeking an abortion.

Warren also vowed not to prosecute those seeking abortions. Ninety state attorneys across the county made the same pledge. However, no case had come to Warren’s desk before he was removed.

Rogow says that will help his legal battle. He believes Warren has a strong case.

"He hasn't done anything that merits this kind of removal," he explained.

Hours after Florida Gov. Ron DeSantis announced he was suspending Hillsborough State Attorney Andrew Warren for choosing not to enforce some state laws, Warren shot back, calling the governor's move "illegal overreach" that "spits in the face of the voters of Hillsborough County."

Asked whether he believes Warren will get his job back, Rogow didn't hesitate to answer.

"I think his chances are good. I think as this plays out, Warren will be reinstated as state attorney. If anything, he will gain traction and respect having suffered this indignity by the governor," stated Rogow.