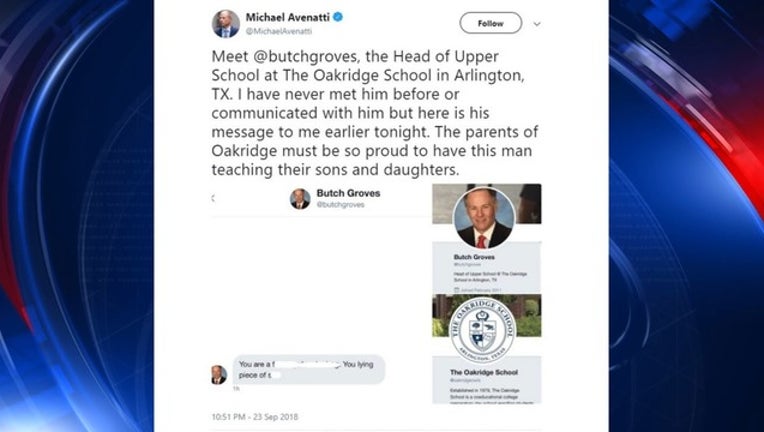 The head of a prominent private school in Arlington has suspended a school administrator after he sent a profane Twitter message to the attorney who represents adult film star Stormy Daniels.

Michael Avenatti tweeted a screenshot of the message, which was sent Sunday night by Butch Groves, who is The Oakridge School's Head of Upper School. The message called Avenatti several explicit names. Groves has since deleted his account.

Avenatti says he has no connection to the school administrator. The attack message was apparently in response to a tweet Avenatti posted about a client who he said had credible information related to alleged sex assaults involving Supreme Court nominee Brett Kavanaugh.

"I was shocked and I was also disgusted by it,” the lawyer said.

Avenatti made the private message sent to him by Groves very public. He tweeted it to 777,000 followers with the message: "the parents of Oakridge must be so proud to have this man teaching their sons and daughters."

“I was even more disgusted when I realized that this is a man that's employed at a school teaching kids and also is supposed to be serving as a role model and a leadership position in that school,” Avenatti told FOX 4.

The backlash on Facebook was immediate. One upset parent wrote: "This is incredibly disappointing. As a new parent of four children who attend Oakridge, I find this disturbing to say the least. Just because the conduct occurred outside of school hours does not serve to mitigate it."

Another parent said: “I am an Oakridge parent and Grove's behavior is not the example I want my grandson to emulate."

Some parents came to the administrator's defense. One parent wrote: "Mr. Groves has done a lot of positive things for the academics, athletics and arts of this school over the years. He made a very poor decision and deserves to be reprimanded. However, one act should not destroy this man's career and legacy at the school."

By day’s end, Groves’ future at the school looked to be in peril. John Kellam, Head of School, said in a letter to parents posted online Monday evening that the school has clear policies in place for both online and face-to-face communications.

The school issuing a statement saying in part that Groves "admitted to the communication, he deeply regrets his comments and the negative attention brought to the school" and that the school "suspended Mr. Groves indefinitely as we conclude our investigation.”

“Oakridge employees are expected to maintain the respect, dignity and professionalism that is consistent with our mission,” Kellam said in the letter to Oakridge parents. “Mr. Groves’ conduct was unacceptable and inconsistent with these policies and standards.”

“You can't just fire off a statement on social media to someone you've never met before of this nature and not expect that there's going to be repercussions from it,” Avenatti said.