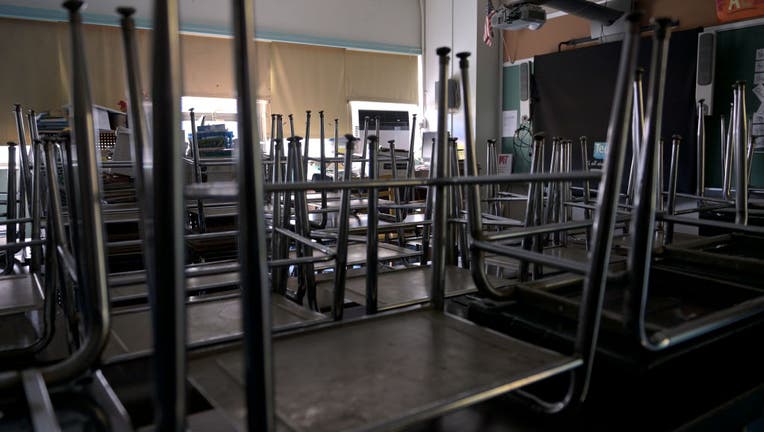 A classroom is empty with the lights off on what would otherwise be a blended learning school day on November 19, 2020. (Photo by Michael Loccisano/Getty Images)

BALTIMORE - Baltimore students who failed classes during the 2020-2021 school year will still pass on to the next grade level, the city's school board announced this week.

Baltimore City Public Schools CEO Sonja Santelises made the announcement during a virtual Tuesday board meeting.

"As we approach the end of the 2020-2021 school year, we all recognize that students have experienced incredibly significant challenges and interruptions in their learning," Santelises said. "With that in mind, the district has developed a fair and straightforward process for evaluating and recording students' progress in the current school year."

Santelises added that the district has taken advice from faculty, families, students, support staff, school leaders and others during virtual group meetings since February.

Community and school members have been evaluating grading methods that reflect the "unique circumstances" that "Black people have faced."

RELATED: Baltimore-area student passed only 3 classes in 4 years, ranked near top half of class

Maryland teen passes 3 classes in 4 years, ranked near top half of class

A Baltimore-area high school is facing scrutiny after reports came out about a student who passed just three classes in four years, but moved ahead anyway. Now that he’s being sent back to the ninth grade, his mother says the school failed him. (Source: WBFF)

Baltimore City Schools Chief Academic Officer Joan Dabrowski said during the meeting that the district is committed to its students and recognizes "the challenges they have faced this academic school year."

"We are going to avoid the punitive approach to failing students and the default reaction to unfairly retain students," she said. "Instead, we are going to … commit to our students as we plan for a multi-year academic recovery."

No changes will be made to the pre-K, kindergarten and first-grade grading systems. In grades two through five, however, students' "U" grades, which stand for "unsatisfactory," will be changed to "not complete," or "NC." Students at all middle and high school grade levels who failed classes will receive an "NC" — which stands for "no credit" at the high school level — instead of an F.

Students will move onto the next grade levels but will also be given time over the summer and fall to complete unfinished courses.

Baltimore public schools are using a hybrid learning model due to the COVID-19 pandemic, meaning students have been given the option to attend a mix of in-person and virtual classes. The district plans to fully reopen its public schools this fall for the 2021-2022 school year.

More than 50% of school districts across the U.S. have reopened full-time as of March 29 while 46% have adopted hybrid-learning models, the American Enterprise Institute's Return to Learn Tracker shows.

The Department of Education in April issued its second volume of school reopening guidelines saying that some "3 million students have either been absent from or have not been actively participating in remote learning since the beginning of the pandemic," citing researchers.

Students who were absent or not actively participating in classes were also "more likely to be English learners, students with disabilities, students in foster care, students experiencing homelessness, students from low-income backgrounds, Native American youth, and migratory students."

This is in part due to the fact that minority students are less likely to have consistent internet service or devices necessary for remote learning in what some educators have dubbed "the digital divide."

The Centers for Disease Control and Prevention said in January that there is "little evidence" schools "have contributed meaningfully to increased community transmission." In February, the agency said the adverse effects of virtual learning outweigh the threat of transmitting the virus during in-school learning.

In mid-March, the CDC updated its K-12 school reopening guidelines to say schools can safely reopen while enforcing just 3 feet of social distancing between students with mandatory mask usage. The guidelines also do not require teacher vaccinations in order for schools to reopen, though educators in most states are already eligible to receive the vaccine if they sign up for it.

Fox News' Kayla Rivas contributed to this report. Get updates on this story from foxnews.com.