TAMPA, Fla. - A Bay Area couple is working to build back Florida's oyster industry after the Apalachicola Bay oyster fishery was shut down.

Brian and Lindsay Rosegger own and operate Lost Coast Oyster Company -- the first aquaculture oyster farm in the history of Tampa Bay. They saw an opportunity as they watched the iconic Apalachicola oyster fishery get shut down after years of drought and other pressures destroyed wild oyster beds there.

Brian says aquaculture farming like this could help alleviate pressure on fishery populations around Florida that have suffered from decades of wild harvesting.

"It becomes increasingly clear that we can’t continue to harvest at the rates that we have historically, especially when you consider the needs for future demands," he said. "I knew there were guys growing clams here in Tampa Bay. That tells me if there is food for clams, there is probably going to be food for oysters, too." 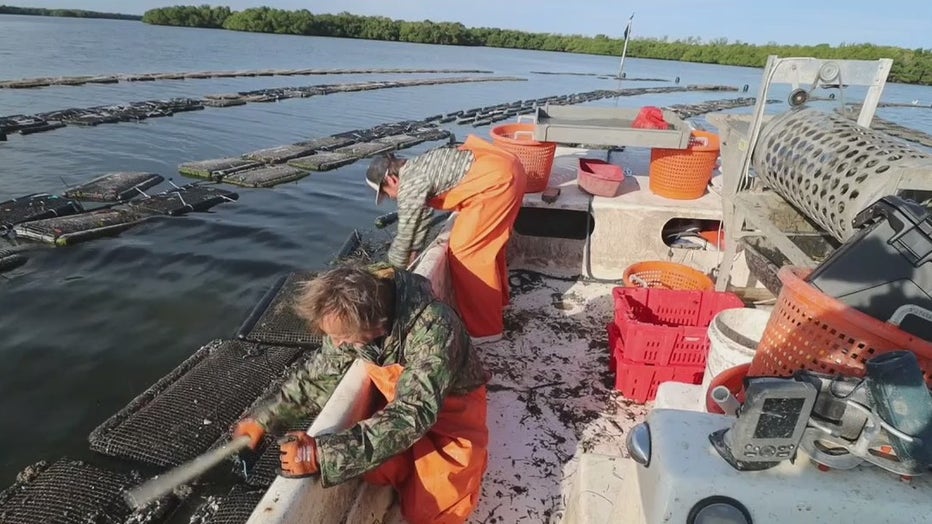 Brian spends entire days at the farm, spacing oysters as they grow so they don't compete for food. And they grow quickly.

In the northeast, an oyster can take two years to grow from spawn to harvest. Here in the warm waters of Tampa Bay, it’s happening in less than a year.

"We have no shortage of restaurants that are buying oysters from all over the country. I said there is no reason they shouldn’t be buying an oyster from Tampa Bay," says Brian.

Florida shuts down bay known nationally for its oysters

Because of a dwindling oyster population, FWC is shutting down oyster harvesting in Apalachicola Bay through the end of 2025.

"It's been an amazing opportunity for us and we are actually starting to use a lot of local stuff here," says Jacob Forman, manager at Alto Mare.

Lindsay says as the farm grows, they'll be able to supply more restaurants.

The state’s oyster industry got some very bad news just before Christmas. Florida is banning oyster harvesting in north Florida’s Apalachicola Bay. It’s another blow for communities that have already gone through a lot.

Brian says that while they may be pioneers of sustainable oyster farming in Tampa Bay, they hope they aren't alone.

"We hope we can inspire other people to follow in our path and we want to put Tampa Bay on the map," he added.