LOS ANGELES - Betty White, a legendary TV actress known for her iconic roles in "The Mary Tyler Moore Show" and "The Golden Girls," has died. She was 99.

A representative for White confirmed her death to the Associated Press, People Magazine and TMZ, which was first to report the news. White's death came just weeks before what would have been her 100th birthday.

RELATED: A look back on Betty White’s career

In a statement, White’s close friend and agent Jeff Witjas said he believed "she would live forever."

"I will miss her terribly and so will the animal world that she loved so much," Witjas told People. "I don't think Betty ever feared passing because she always wanted to be with her most beloved husband Allen Ludden. She believed she would be with him again."

White had just done an interview with People Magazine that hit stands this week in which the actress shared her secrets to a happy life. She noted feeling "so lucky" to be in good health and joked that trying to "avoid anything green" was key to her longevity. A one-day movie event was also just announced last week on what would have been her centennial birthday in 900 theaters nationwide — Jan. 17, 2022. 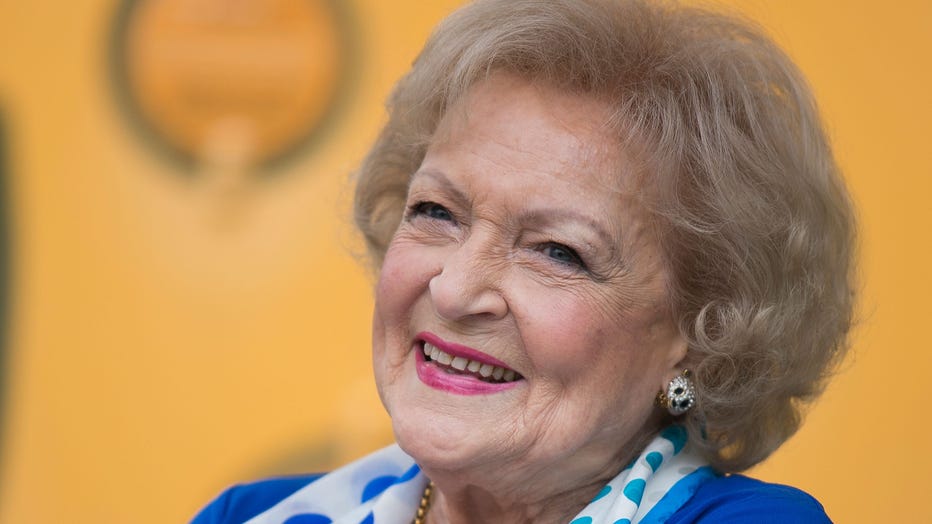 White had one of the longest careers in television history and has become a national treasure over the years. She is best known for her "The Mary Tyler Moore Show" and "The Golden Girls" roles, both sitcoms which have been included on the list of the 101 Best Written TV Series of All Time by the Writers Guild of America.

Reactions quickly poured in after news of her death broke. Ryan Reynolds, her co-star in the 2009 film "The Proposal," said the world "looks different now."

"She was great at defying expectation. She managed to grow very old and somehow, not old enough," Reynolds wrote. "We’ll miss you, Betty. Now you know the secret."

TV host and comedian Ellen DeGeneres said White lived "an exceptional life." "I’m grateful for every second I got to spend with Betty White," she added.

White appeared on-screen and in the homes of millions for more than eight decades. With a legacy spanning generations, she was a true pioneer in television history. She was not only a star on camera but a powerhouse behind the scenes, regarded as the first woman to ever produce a sitcom, "Life with Elizabeth."

White won five Emmy Awards and three American Comedy Awards, as well as a Lifetime Achievement Award in 1990. She was inducted into the Television Hall of Fame in 1995 and has a star on the Hollywood Walk of Fame alongside her late husband Allen Ludden, which soon became decorated on Friday with flowers from fans. 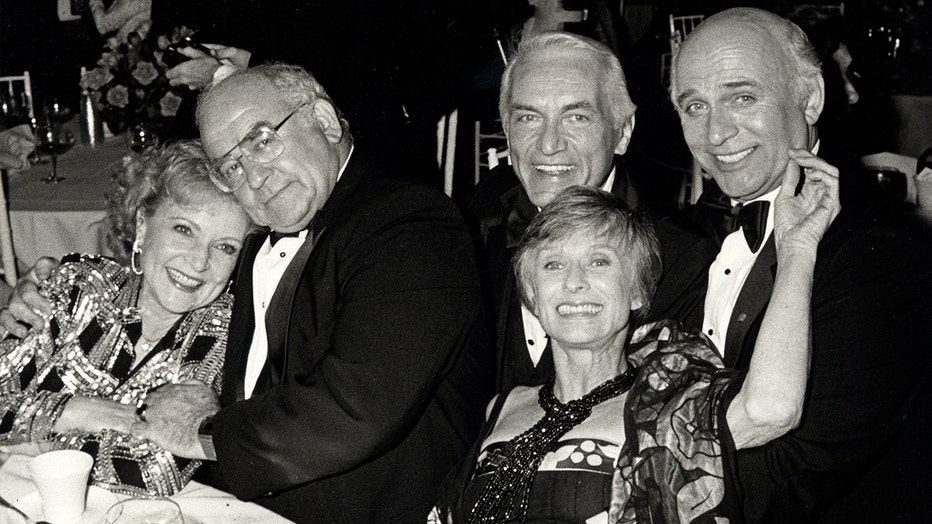 She was born on Jan. 17, 1922, in Oak Park, Illinois. She was the only child of Horace Logan White, an electrical engineer, and Christine Tess, a homemaker. When she was 2, White and her family moved to Alhambra, California, and later to Los Angeles. She attended Beverly Hills High School, graduating in 1939.

Before pursuing a career in acting, White had a passion for wildlife and the outdoors. She expressed in interviews throughout her career that she had wanted to become a forest ranger but at the time women were not allowed in the profession. It wasn’t until 2010 that the United States Forest Service made her an honorary ranger.

Before White’s career in television, she worked in theater, radio and as a model, but her aspirations of stardom were put on pause when World War II broke out. White hung up her ambitions and joined the American Women’s Voluntary Services driving PX trucks throughout Los Angeles delivering military supplies. She would also participate in song and dance shows for soldiers before they were sent overseas.

After the war, White started working in radio reading for commercials and doing whatever she could to get her foot in the door. She would eventually appear on several game shows as co-host with Al Jarvis on his television variety show, "Hollywood on Television."

White would eventually go on to host the show on her own. It was there that she met the series' pianist George Tibbles, and together they formed their own production company, Bandy Productions. Taking from sketches previously written for "Hollywood on Television," White and Tibbles developed a 30-minute-long sitcom called "Life With Elizabeth." She received her first Emmy Award nomination for her work on the series, before going on to star in the series "Date with the Angels," a comedic portrayal of domestic life.

White always maintained her status as a frequent guest on many television game shows, including "To Tell the Truth," and "Password," which was hosted by Allen Ludden who would later become White's third husband in 1963 until his death in 1981. Ludden died of complications from stomach cancer, and while the two had no children together, White played an active role as stepmother to his three children from a previous marriage. White never remarried. 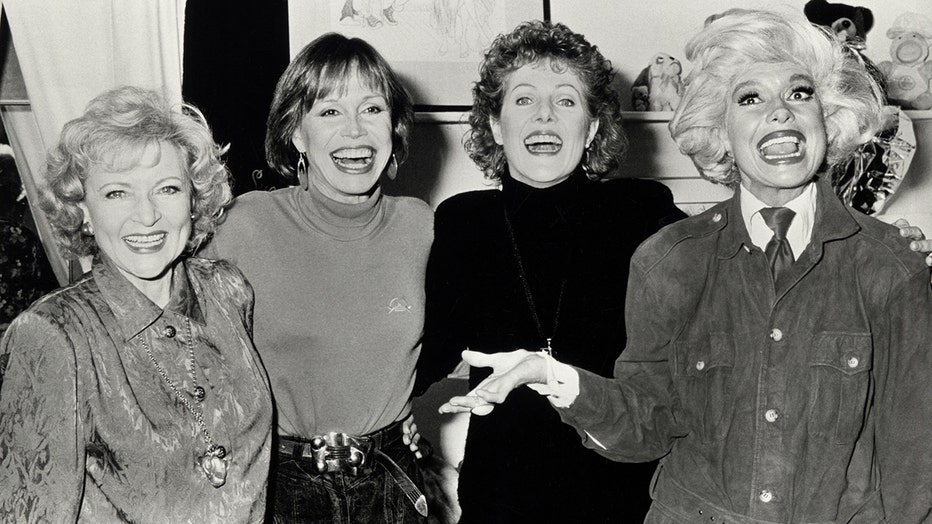 White would then go on to play Rose Nylund on the extremely successful 1980s sitcom "The Golden Girls." The series lasted for seven seasons, eventually winning White another Emmy Award. The show would go off the air in 1992 until White reprised her role in the short-lived spin-off, "Golden Palace." White would go on to guest star in a handful of television series including "The John Larroquette Show," in which she played herself, earning her yet another Emmy. 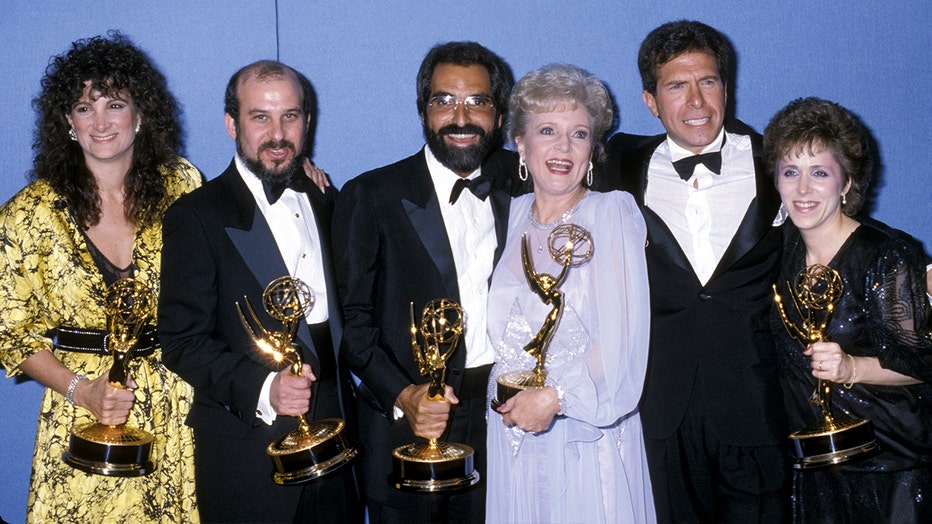 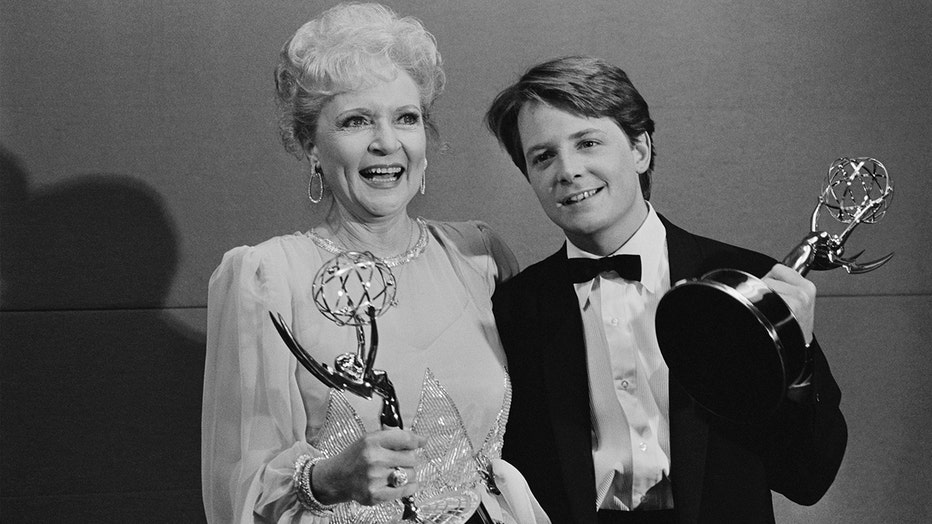 Betty White and Michael J. Fox pose with their Emmy Awards for Outstanding Lead Actress and Actor in a Comedy Series. White won for her role on the Golden Girls and Fox for his on Family Ties. (Getty Images/Bettmann)

White worked steadily over the next few years appearing in movies and even in a successful ad campaign for Snickers that ran during the 2010 Super Bowl. Following the success of the Snickers commercial, a grassroots Facebook campaign was launched in order to get White to host "Saturday Night Live." Several hundred thousand followers of the Facebook page signed the petition, leading NBC to eventually confirm that the TV legend would host the show. White made history as the oldest person to host SNL, an appearance that would win her yet another Emmy for outstanding guest actress in a comedy series.

White’s success continued with her first Grammy in 2012 for a spoken-word recording of her bestselling book "If You Ask Me: (And of Course You Won’t)." That same year, White hosted a hidden camera show, "Betty White’s Off Their Rockers," where she and her cast would play pranks on unsuspecting younger people. She received an Emmy Award nomination for her work on the show. 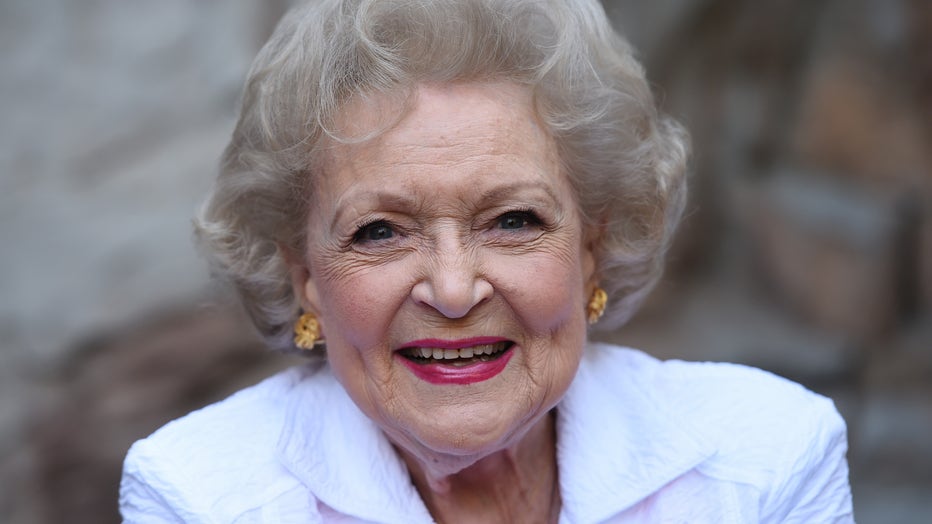 Betty White leaves behind a legacy that has touched the hearts of millions. She has entered homes through generations of viewers with her iconic wit and sharp personality. Her loving nature and comedic prowess resonated for audiences young and old.

This story was reported from Cincinnati, Detroit and Los Angeles. Allison Shoemaker also contributed to this report.

Remember the beloved Betty White with these titles, streaming for free on Tubi

Life with Elizabeth (1952): White became the first woman ever to produce a sitcom with this 1952 gem, in which she played a newlywed adjusting to the trials and tribulations of married life.

Date with the Angels (1957): Another jewel in Betty White’s sitcom crown, this one starred white as Vickie Angel, a woman newly married to an insurance salesman. Watch this one for a glimpse of the unbeatable timing that made her a sitcom icon.

Betty White’s Pet Set (1971): Betty White, a legendary champion for animals, interviews some furry friends and some less furry but more famous ones in this brief series. Her sit-down with friend and co-worker Mary Tyler Moore is not to be missed.