ST. PETERSUBRG, Fla. - St. Pete police say the body that was found in a burning car on a bike trail Monday belongs to an adult male, but the case is still mostly a mystery.

A bicyclist made the discovery and called 911.

When Dexter Howard strapped his baby son in for a bike Monday morning, he didn’t expect this.

He was riding his bike on the Skyway Trail behind the Twin Brooks Golf Course in South St. Pete around six Monday morning when he ran into a car that had been set on fire.

Just after 6 a.m. Monday, St. Pete firefighters responded to the car fire on the Skyway Trail, behind the Twin Brooks Golf Course near 22nd Avenue South and 41st Street South.

“We turned around right then it was no place for a little kiddo,” Howard described. “Immediately my instinct was to turn around because whatever was going on was obviously pretty messed up, cars really can’t be back there.”

He called 911 and lead firefighters back a mile on the trail to the burning car. They used fire extinguishers but mostly had to let the fire burn out. That’s when they found a body in the trunk.

“It’s not too far from home which is not a great feeling,” Howard said. 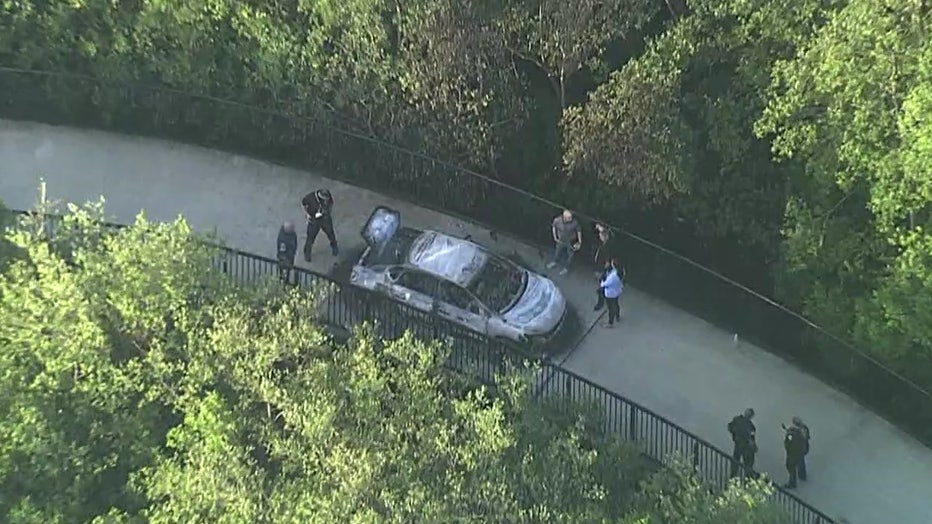 Detectives with St. Pete police are treating the case as a homicide. They only know the person is an adult male. They are relying on the medical examiner for an identity and are also still working to figure out the make and model of the car.

It’s all still a mystery for investigators and the man who made the discovery.

When asked if this will mean an end to his morning bike rides, Howard said, “No, I might get better headlights so I can see them coming further off.”

The area where the car and body were found is not far from where a jogger made another gruesome discovery a few months ago. Back in July, a jogger found a human head on the side of the road. Police are still investigating that case but say the two are not related.