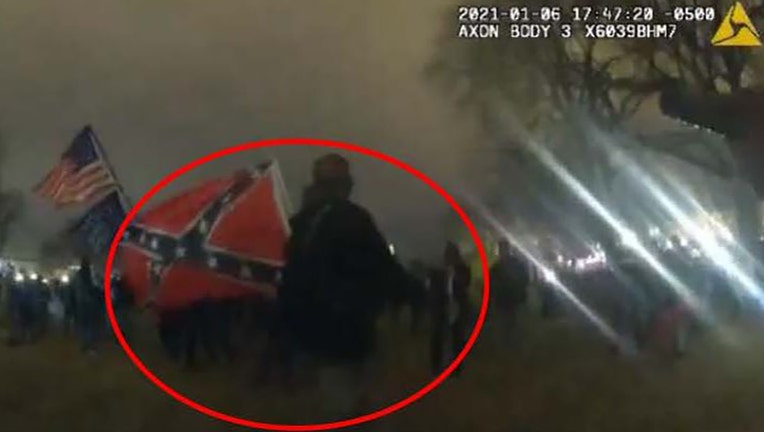 David Alan Blair seen in an officer's body cam video with a Confederate flag on Jan. 6, 2021. (Photo: Department of Justice)

WASHINGTON - A Maryland man who used a lacrosse stick attached to a Confederate battle flag to shove a police officer during the U.S. Capitol riot was sentenced on Wednesday to five months in prison, according to a Justice Department spokesman.

U.S. District Judge Christopher Cooper also sentenced David Alan Blair, to 18 months of supervised release after his prison term and ordered him to pay $2,000 in restitution, said William Miller, a spokesman for the U.S. Attorney’s office for the District of Columbia.

Blair, 27, left his home in Clarksburg, Maryland, and started driving to Washington, D.C., after the riot erupted at the Capitol on Jan. 6, 2021. Shortly before 6 p.m., Blair encountered a line of Metropolitan Police Department officers on the Capitol’s West Lawn and refused to heed their commands to leave the area, prosecutors said. 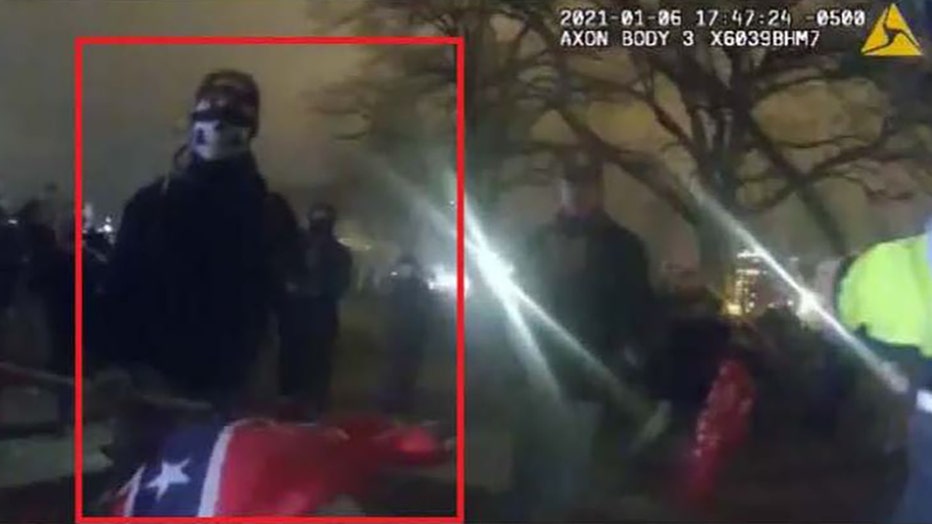 David Alan Blair seen in an officer's body cam video with a Confederate flag on Jan. 6, 2021.

Blair was arrested after he pushed his lacrosse stick against an officer’s chest.

The officer responded to the push by striking Blair three times in the head with a baton, drawing blood and giving him a concussion, according to Blair's attorney.

Approximately 840 people have been charged with federal crimes related to the Capitol riot. Over 330 of them have pleaded guilty, mostly to misdemeanor charges punishable by no more than one-year imprisonment. More than 200 have been sentenced, including approximately 100 who received prison terms ranging from nine days to over five years.

Blair is one of several Capitol riot defendants who carried a Confederate battle flag that day. The others include Kevin Seefried, a Delaware man who was convicted in June of storming the Capitol with his adult son. Another flag-toting rioter, Matthew Ryan Miller, was sentenced in May to 33 months in prison for assaulting police officers and obstructing an official proceeding.

Blair pleaded guilty in March to a felony charge of interfering with law enforcement during a civil disorder, which carries a maximum sentence of five years imprisonment.

More than 800 people have been arrested for their alleged role in the January 6, 2021, attack on the U.S. Capitol. Of those 800, more have been rounded up in Florida than any other state and many of the people arrested, charged and sentenced to prison were in the Tampa Bay area, according to the U.S. Department of Justice.

In a court filing, Roberts said Blair thought he had the right to be where he was and to "exercise his First Amendment right of free assembly" before one of the advancing officers shoved him.

"The brute force which led to provoking the defendant was not called for," Roberts wrote.

Blair didn't enter the Capitol. He told investigators that he went there to "fight Antifa," not to disrupt Congress from certifying President Joe Biden's 2020 electoral victory, according to prosecutors.

Blair also said he had been trading social media messages with somebody who often made anti-Semitic remarks and "blamed Israel for the world’s problems," Assistant U.S. Attorney Michael Liebman wrote in a court filing.

RELATED: Accused Florida Capitol rioters may interact with each other, ordered to stay away from fugitive co-defendant

"Blair further explained that as a result of these discussions he came to believe the United States was ‘falling apart’ and that he had to ‘stand up’ to communism," Liebman added.

On Jan. 6, Blair was wearing a skull-themed neck gaiter and a backpack containing a knife with a serrated blade and a roll of duct tape. He told police that he used the duct tape to attach the Confederate battle flag to his lacrosse stick.

Liebman said Blair likely knew that displaying the flag, widely viewed as a symbol of racist hate, would "antagonize any ideological opponent he might encounter."

Blair, whose mother is from South Carolina, "cared deeply about his family’s heritage," his lawyer wrote.