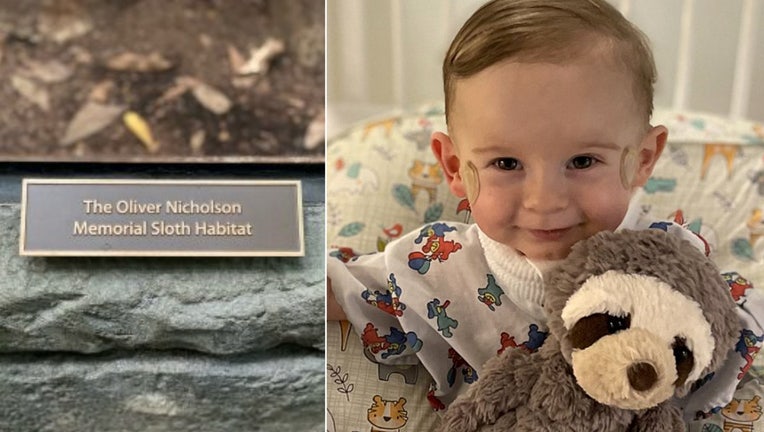 The new name of the zoo's habitat, and a photo of little Oliver with his stuffed sloth toy. (Photos: Cincinnati Zoo, left, Alex Nicholson, right)

CINCINNATI, Ohio - A zoo in Ohio is naming its sloth habitat after an Indiana toddler born with rare birth defects who died earlier this year.

Alyssa and Alex Nicholson of Lawrenceburg, Indiana, had created a petition on change.org back in August with the hopes of convincing the Cincinnati Zoo to name their soon-to-be newborn sloth after their late 1-year-old son, Oliver.

Oliver and his twin brother, Atticus, were born prematurely in October 2019. Oliver had surgery in January to connect his esophagus and his stomach. His mom and dad got him a toy sloth during his recovery and discovered the stuffed animal with two toes resembled their baby boy.

"He adored that sloth stuffed animal. He would sleep with him every night. We had a giant ‘hang in there’ sloth balloon in his hospital room, all of the nurses loved it," Alex told FOX News, adding, "He was always so calm, and so patient; and so happy to be here."

Oliver died after undergoing a routine procedure to check his esophagus led to bleeding around his heart and he was unable to recover.

During the little boy's funeral, loved ones told the family that the female sloth at the Cincinnati Zoo was pregnant, and suggested that perhaps her baby could be named in Oliver's memory.

The family started the petition to name the baby Oliver, which gathered more than 80,000 signatures. Sadly, the zoo never got to discuss names for the newborn sloth, which was delivered stillborn on Sunday.

Instead, the zoo decided to honor Oliver by naming its entire sloth habitat after him.

"We had been in contact with the Zoo and had discussed other ways that we could honor Oliver," Alex Nicholson said. "This tribute will be lasting and means so much. It gives us a huge bright spot on an especially difficult day."