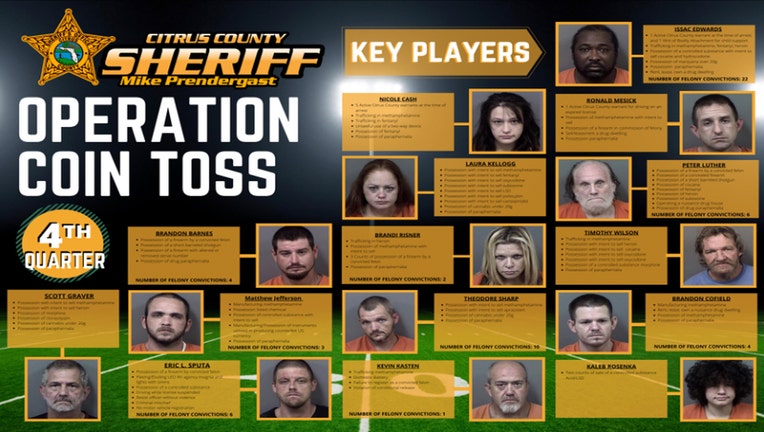 The Citrus County Sheriff's Office Tactical Impact Unit (TIU) partnered with the US Marshals, the Florida Department of Correction's Probation Services, Citrus County Code Enforcement, and many other community partners during the operation, which began in June 2019. In the first quarter, it targeted those responsible for drug trafficking and those who sell illegal narcotics.

During the fourth quarter, TIU focused on reported drug overdoses and intelligence collected through these investigations. According to the CCSO, by obtaining information on suppliers tied to fatal drug overdoses, TIU was able to conduct covert surveillance and undercover drug purchases resulting in the combined seizure of 40 grams of deadly fentanyl, 143 grams of methamphetamine, 87 grams of heroin, and 30 grams of cocaine.

"The focus of Operation Coin Toss is to dismantle the drug supply chains plaguing the vulnerable population of Citrus County," said Sheriff Mike Prendergast. "We continue to focus our attention on the dealers who are making a profit by exploiting addicts and their loved ones."

Investigators said there were several firearms that had been illegally modified or had their serial numbers removed. All firearms were seized and resulted in 12 felony firearm charges.

"There is a direct correlation between the illegal sale of narcotics and the dealing in stolen property and other property-related crimes," stated Major Justin Ferrara. "Focusing on the suppliers of deadly narcotics also allows us to recover stolen property and reduce the indirect crimes associated with drug sales."

Anyone with information about the illegal sale of narcotics or any other crime in Citrus County, is asked to call 352-726-1121 or you can remain anonymous by calling Crime Stoppers at 1-888-269-8477.