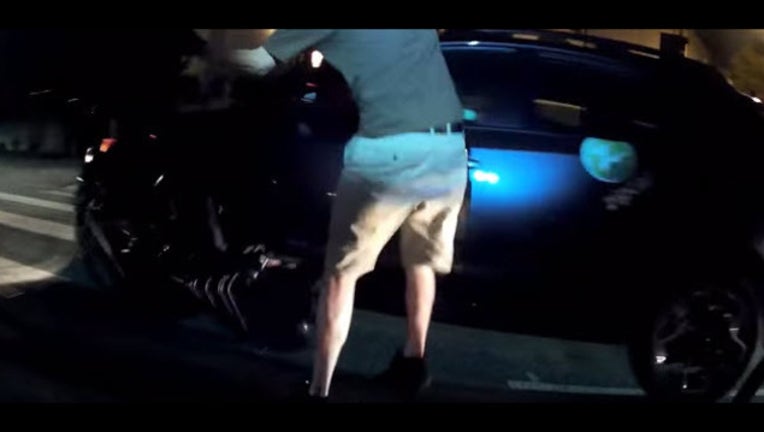 SAN FRANCISCO - A cyclist riding with the Critical Mass bicycle group on Friday night was caught on video striking a rental car multiple times with his bike lock in San Francisco's Marina District.

In a video posted to YouTube the day after the incident, a group of cyclists are seen partaking in the mass bicycle ride, which is held in San Francisco on the last Friday of each month.

Music is playing as the bikes are cruising through the intersection of Marina Boulevard and Lyon Street. The person who shot the video states that the incident occurred at 8:16 p.m.

In the video, the group attempts to cross Marina Boulevard by cutting across multiple lanes of traffic and then a driver of a Zipcar moves toward the cyclists.

A cyclist blocks the car's path and others join him. The driver nudges forward as the cyclists yell.

The cyclist then takes his U-Lock and slams it against the car multiple times as it drives off.

The San Francisco Critical Mass group, which is not an organization and has no known leaders, explicitly discourages cyclists from picking fights with motorists "even (especially) if they're itching for one.

The Critical Mass guidelines also discourage riders from riding into oncoming traffic on the wrong side of the road.

No police report was filed following the incident and therefore, police are not trying to identify the cyclist.

In response to the incident, San Francisco Supervisor Mark Farrell, who represents the Marina District, released a statement condemning the behavior.

The actions by the cyclists caught on video this past Friday evening participating in Critical Mass are disturbing and should never be tolerated in our city - especially the one cyclist seen attacking the vehicle with a bicycle lock repeated times," Farrell states.

Farrell said that while he understands the history that Critical Mass has as a pro-bicycle protest movement in the city, and recognizes that most of the participants are respectful of others, he said the Critical Mass participants "must understand that actions like the ones this past Friday reflect poorly on the entire group and hurt the group's overall message and movement."

Farrell said he has reached out to the Police Department to evaluate how best to prevent similar incidents from happening in the future.

He said he hopes Critical Mass cyclists will "respect everyone and all the applicable traffic laws while participating."

As of Monday afternoon, the YouTube video has more than 14,000 views.