The EF-2 tornado had torn off part of the roof and destroyed a dozen classrooms. By Monday afternoon, the district was bringing in portable classrooms to replace the ones in disrepair.

KATHELEEN, Fla. - The head custodian at Kathleen Middle School and a coworker huddled in a closet as a tornado ripped apart the roof last week.

Rodney Jamerson and another custodian were clocking out Friday night when severe weather hit Polk County.

"That's when we heard the -- the train, I guess. We heard that and the walls started heaving in and out," Jamerson said. "Wood started falling in and so we're both in there, I didn't know what was going on. When I walked out, it was pitch black, you couldn't even see your hand in front of you and I didn't walk, I ran. I ran straight over here to check on my kids."

After finding out his children were safe at his home across the street, Jamerson saw the extent of the damage to the school.

The EF-2 tornado had torn off part of the roof and destroyed a dozen classrooms. By Monday afternoon, the district was bringing in portable classrooms to replace the ones in disrepair.

"When they shone the light on the roof and I saw the damage on the roof, my heart just dropped because to look at the severity of that and to be blessed not to do like the Wizard of Oz, I'm good," he said. "This school has serious history and there's people in this community that went here, worked here and all that. And as long as I've been here, it's become a part of me as well. So for all of this to be going on, it's hurtful."

"It's totally destroyed inside. We can't salvage anything," she said, adding flooding is another big problem. "At one point we had about three feet of water, right now we're standing maybe an inch or two. They're pumping out as fast as it's going in." 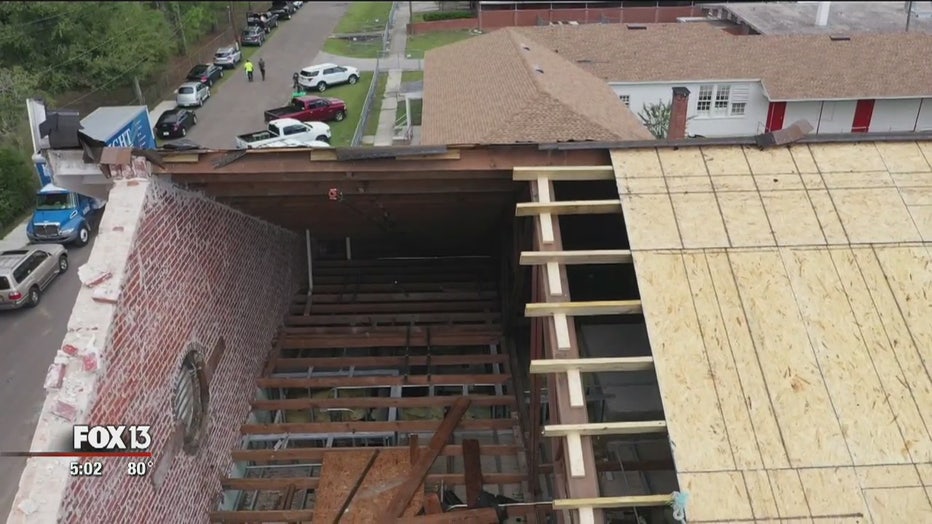 The community has been trying to help the school get on its feet.

"Kathleen was here yesterday, is here today and it's going to be here tomorrow," Gregory said.

Jamerson is going to be there too and he knows how fortunate he is to be able to say that.

Polk County school district administrators said they're hoping to reopen the school this week, but added there's no timetable at this point.