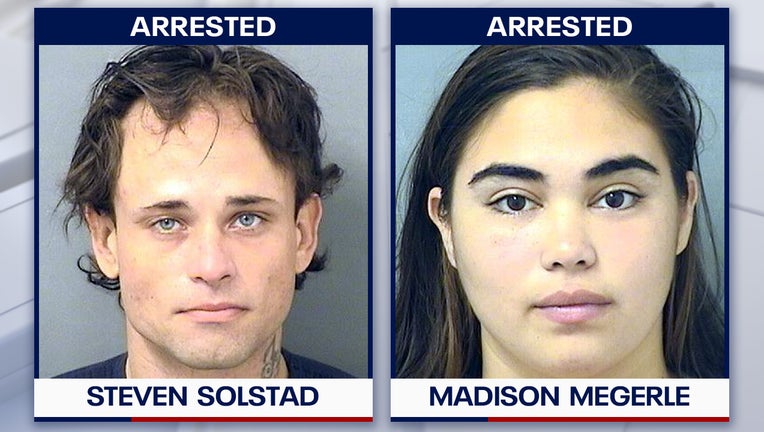 KEY WEST, Fla. - A Florida couple kidnapped a man at knife-point, stole his car and robbed his home over a period of about 30 hours, authorities said.

Madison Megerle, 22, and Steven Solstad, 31, were arrested last month and charged with kidnapping, aggravated assault, grand theft, robbery and grand theft of a motor vehicle, according to a Monday news release from the Monroe County Sheriff's Office.

The 50-year-old victim told investigators that he went to Solstad's Key West home last month to smoke marijuana. The victim said he fell asleep in his car because the marijuana was laced with something. When he woke up, Solstad and Megerle got into his car and forced him into the passenger seat, officials said.

The victim said that Solstad punched him, threatened him with a razor and held him hostage as they drove around Key West and Stock Island. The victim said he gave the couple $150.

At one point, the couple took the victim to a bank drive thru, but the victim was unable to withdraw any money because he did not have his ID, officials said. Security footage from the bank and other locations helped confirm the allegations, investigators said.

The couple eventually took the victim to his home, where Megerle and Solstad stole clothes, electronics and other items, officials said. The victim told authorities the couple kept him incapacitated by making him do drugs while continuing to threaten him with a knife.

The victim told authorities the couple stayed at his home for about a day before leaving in the victim's car. The victim said he was unsure about what drugs he had been given and sought medical attention.

Online court records didn't list an attorney for Solstad or Megerle who could be reached for comment.