HUDSON, Fla. - Homeowners in Hudson’s Lakeside Woodlands subdivision remain on edge amid increasing sinkhole activity in their neighborhood as a team of engineers turns over a geophysical evaluation report to Pasco County emergency officials -- and solutions could cause more issues.

County officials commissioned the evaluation in an effort to assess the most effective way to reverse the formation of the depressions, but, in the report, the engineers lay out the limitations of trying to turn the problem around.

The engineers said an underground cave system, along with the recent formation of additional sinkholes in the area will likely complicate efforts to correct the issue. The report mentions drilling grout pipes, drilling micro-piles, and driving piling, arguing that all of these remedial activities could cause construction vibrations that lead to additional dropouts in the area. To put it simply, according to the report, any traditional attempt to fix the problem may only make it worse.

An excerpt from the report:

"Conventional remediation methods such as compaction grouting will likely be complicated by the Beacon Woods cave system (underground cave system) and the extent of the observed dropouts/sinkholes in the adjacent stormwater retention area. Performing a compaction grouting program will likely result in significant migration of grout and surficial soil through the voids and caverns within the limestone formation resulting in large overruns of grout quantities and possibly adverse impacts to the reported cave system, nearby homes, adjacent wells, performance of the adjacent pond, and the Floridian aquifer."

A portion of Willow Brook Court has been shut down for weeks over concerns the roadway could collapse. In early August, there were approximately twenty depressions in the area. Three months later, Pasco emergency management said that number has nearly quadrupled to at least 76 depression. Rain-saturated top soil has caused the underground cave to collapse.

Engineers recommend that in order to avoid litigation, the county needs to get the support of the homeowners association and other stakeholders on how to move forward. The report also said the Florida Department of Environmental Protection needs to be involved in the decision-making process.

Engineers maintain that no homes are in any danger. There’s no word on when Pasco County emergency officials will come to a decision on what to do about the problem which, by all appearances, only continues to grow. 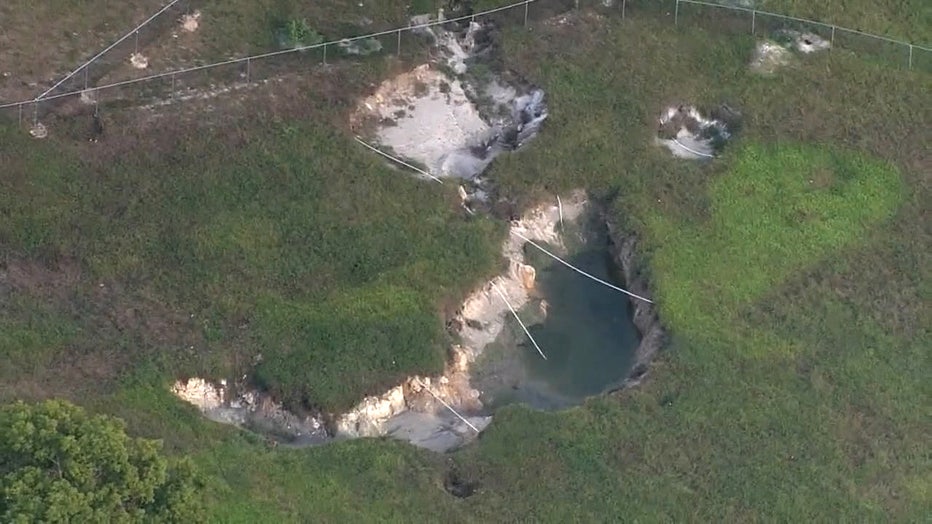 SkyFOX aerials show one of dozens of depressions that have opened up in a Hudson neighborhood. (FOX 13 News)

You can view the full report below: