LONDON - The United Kingdom's antitrust watchdog has blocked Facebook's acquisition of Giphy and ordered the social network to sell off the GIF-sharing platform, saying the deal hurts social media users and advertisers by stifling competition for animated images.

The Competition and Markets Authority said Tuesday that the deal would let Facebook "increase its already significant market power" by denying or limiting other platforms' access to Giphy GIFs and driving traffic to Facebook-owned sites. It has noted previously that there’s only one other big provider of GIFs, Google’s Tenor.

The regulator also was concerned that the deal removed potential competition from the U.K.'s 7 billion pounds ($9.3 billion) display advertising market, of which Facebook controls half.

It's the first time the watchdog has sought to unwind a tech deal, marking an escalation by regulators seeking to tame digital giants.

RELATED: Facebook to end facial-recognition system for more than 1B users

Facebook, which has been renamed Meta, said it disagreed with the decision and is considering all its options, including an appeal.

"Both consumers and Giphy are better off with the support of our infrastructure, talent, and resources," the company said. "Together, Meta and Giphy would enhance Giphy’s product for the millions of people, businesses, developers and API partners in the UK and around the world who use Giphy every day, providing more choices for everyone." 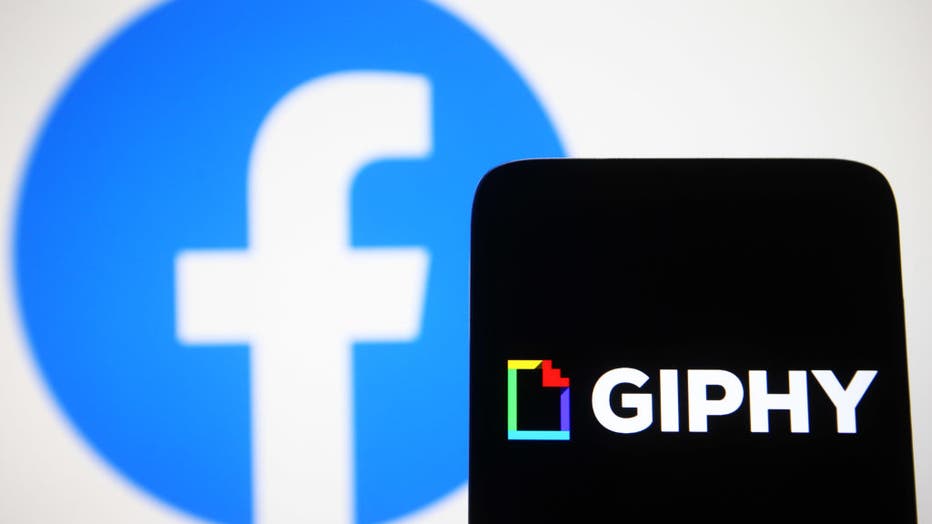 FILE - In this photo illustration, a Giphy logo is seen on a smartphone screen with a Facebook logo in the background. (Photo Illustration by Pavlo Gonchar/SOPA Images/LightRocket via Getty Images)

After consulting with other businesses and groups and assessing alternative solutions proposed by Facebook, the watchdog said it "concluded that its competition concerns can only be addressed by Facebook selling Giphy in its entirety to an approved buyer."

Stuart McIntosh, chair of the watchdog’s independent group that carried out the investigation, said the deal "has already removed a potential challenger in the display advertising market."

"Without action, it will also allow Facebook to increase its significant market power in social media even further, through controlling competitors’ access to Giphy GIFs," he said. "By requiring Facebook to sell Giphy, we are protecting millions of social media users and promoting competition and innovation in digital advertising."

The two sides have waged a bitter battle over the deal, reportedly worth $400 million.

Last month, the watchdog fined Facebook 50.5 million pounds ($67.4 million) for failing to provide information needed for the investigation, saying the company's failure to comply was deliberate.

The watchdog has said that prior to the deal, Giphy had been considering expanding its advertising services to other countries, including the U.K. That would have added a new player to the market and encouraged more innovation from social media sites and advertisers, but Facebook terminated Giphy’s ad partnerships after announcing the deal, it said.