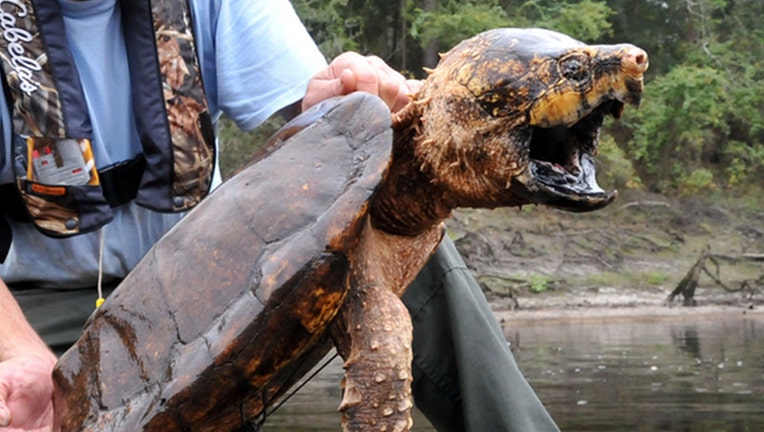 The U.S. Fish and Wildlife Service said it is proposing threatened status for alligator snapping turtles -- huge, spike-shelled reptiles that lurk at the bottom of lakes and slow waterways, luring prey to their mouths by sticking out a wormlike lure.

Every state in their range now protects them, but the long-lasting effects of catching the reptiles for turtle soup are among the reasons their numbers are now so low, the agency said.

"Alligator snappers are some of the fiercest, wildest creatures in the Southeast, but overexploitation and habitat destruction have put their lives on the line," Elise Bennett, an attorney for the Center for Biological Diversity, said in a news release.

The turtles are suffering the effects of "decades and decades of exploitation," Bennett, whose organization sued for protection for the species, said in an interview. 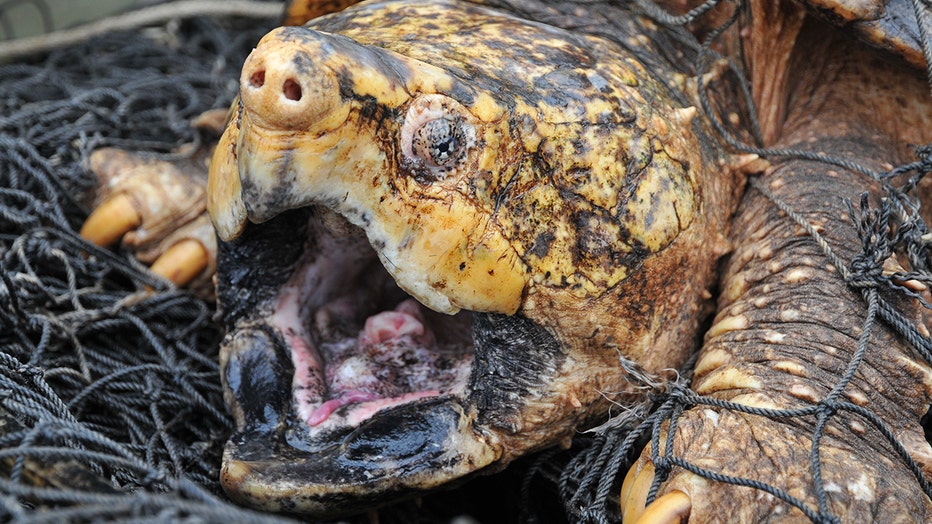 Alligator snapping turtles can live 80 years, with males known to weigh up to 249 pounds (113 kilograms) with shells up to 29 inches (74 centimeters) long. Their jaws are strong enough to snap bone.

An estimated 360,000 exist in 12 states, but without protection, their numbers are likely to plummet to 5% of that or less in 30 to 50 years, the Fish and Wildlife Service said Monday in an online preview of a Federal Register notice scheduled Tuesday.

They once were found in Kansas and Indiana, but now live in Alabama, Arkansas, Florida, Georgia, Illinois, Kentucky, Louisiana, Missouri, Mississippi, Oklahoma, Tennessee and Texas, the agency said.

"The range has contracted in Illinois, Kansas, Kentucky, Missouri, Tennessee, and possibly in Oklahoma," it noted.

READ: Florida to consider switching state bird from the mockingbird

Those states all are along the Mississippi River and its tributaries. The service proposed threatened status in April for the related Suwannee alligator snapping turtle, found in the Suwannee River basin in Georgia and Florida.

It’s legal to catch alligator snapping turtles only in Louisiana, where recreational fishers are allowed one a day, and Mississippi, which limits recreational take to one per year, the federal agency said.

That would no longer be allowed if, after a comment period, the turtles go on the threatened list, Bennett said.

"Commercial harvests for turtle soup products peaked in the late 1960s and 1970s," the Fish and Wildlife Service notice states.

Florida’s manatee population continues to dwindle at an alarming rate, and Congressman Vern Buchanan says he will push for a new law that will change the classification of manatees from threatened to endangered.

The animals are long-lived but grow slowly, aren’t sexually mature until they’re 11 to 21 years old and take an average of 31 years to successfully reproduce, the agency said. They also don’t lay large numbers of eggs, and many other animals eat eggs and young turtles, so the indiscriminate capture had long-lasting effects.

Poaching remains a problem, the notice said, noting that three men were convicted in 2017 of collecting 60 large alligator snapping turtles in one year in Texas and taking them across state lines.

Adults can swallow fish hooks or drown after being hooked on a variety of lines or being caught in nets.