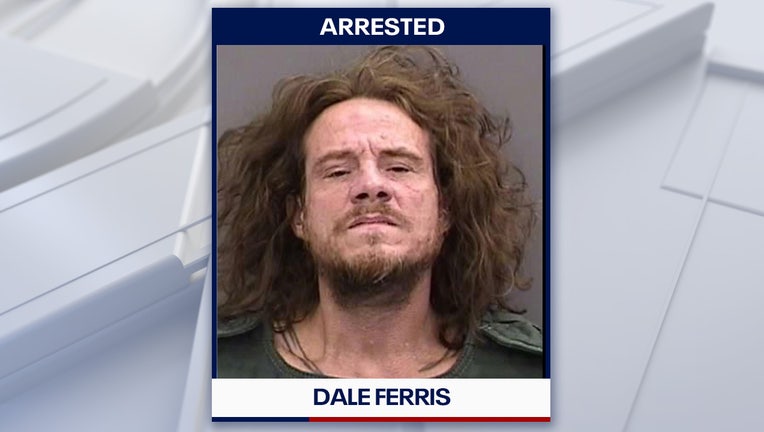 Late Wednesday night, on a major highway, a Pasco County man attempted to steal a car from a Cape Coral woman by jumping on the hood, but another driver distracted him, troopers said. Moments later, he attempted to steal a semi-truck but couldn't put it in gear. That's when deputies arrived.

Before 10 p.m., a black 2018 GMC Sierra was sitting in the southbound lanes without any lights on, according to the Florida Highway Patrol. The driver was 43-year-old Dale Patrick Ferris. Shortly after stopping in the travel lanes, a 2019 Subaru, driven by a 33-year-old woman from Wellington, crashed into the GMC.

Meanwhile, Ferris had already exited the GMC and walked into the path of a 2020 Hyundai SUV, driven by a 42-year-old female from Cape Coral. She braked to avoid colliding into Ferris, who then revealed a handgun and climbed on the hood of the vehicle.

However, "a passing vehicle soon distracted Ferris and allowed the Hyundai driver to speed away successfully," according to an FHP release.

Then, a tractor-trailer, driven by a 62-year-old man from North Fort Myers stopped and exited the vehicle to help. At this point, troopers said Ferris entered the tractor-trailer to try to steal it. But, he was unable to place it in gear or release the air brakes.

The tractor-trailer driver and another witness, a 38-year-old man from South Dakota tried to stop Ferris from carjacking, and the suspect kicked both men in the face and chest, troopers said.

Deputies from Hillsborough and Manatee counties began arriving as Ferris exited the semi-truck. He was arrested.

Troopers said they found a handgun and spent shell casings. Bullet strikes were spotted in the roadway.

Ferris faces several charges, including aggravated assault with a deadly weapon, carjacking with firearm, carjacking, improper exhibition of a firearm, and discharging a firearm in public.