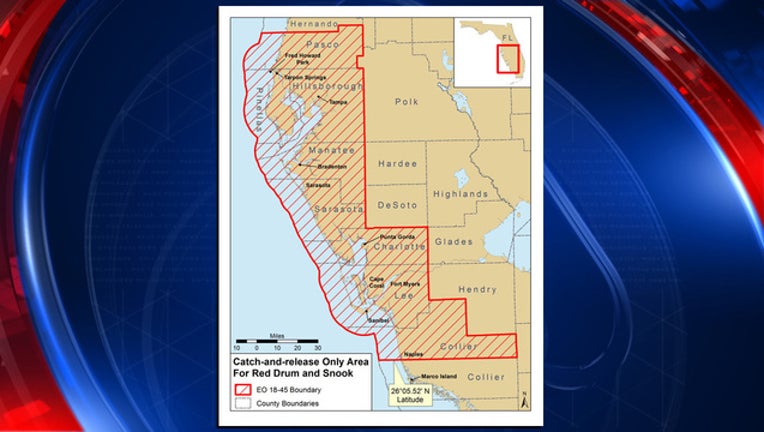 TALLAHASSEE (NSF) - A restriction on fishing for red drum and snook was extended to next spring and will stretch north to Pasco County, as the state continues trying to limit impacts from a red-tide outbreak along the Gulf Coast.

The Florida Fish and Wildlife Conservation Commission agreed Wednesday to extend until May 10 an executive order that imposed a mandatory catch-and-release rule on red drum and snook. The order has been in place for a month from Anna Maria Island to Naples.

“I know we’re in a reactive mode right now, but we’re planning to transition into a proactive mode with these issues,” said Commissioner Joshua Kellam of Palm Beach Gardens.

“We’re putting our best foot forward to learn what we can from it and be better prepared next time,” Chairman Bo Rivard of Panama City added during the commission meeting, held in the Gadsden County community of Havana.

The catch-and-release order, which was set to expire Oct. 12, now will be reviewed by the commission in May and covers waters from Naples north to the Pasco-Hernando County line.

Charter boat operators from the Tampa Bay region expressed support for extending the catch-and-release rules as a way to help replenish the redfish stock in the waters.

Commission Executive Director Eric Sutton said during a break in the meeting that the commission’s action was taken with “an abundance of caution.”

“I certainly hope that the message is that catch and release means you can still catch them, and you can,” Sutton said. “If you go out on those waters, you will see that it’s patchy. There are places to still catch fish. We just want to make sure we are returning them back to the water to help with the recovery.”

Gov. Rick Scott, during a brief phone call to the commission, outlined recent efforts to tackle the outbreak, and he repeated his call for the commission to create a Florida Center for Red Tide Research, reestablish the Florida Harmful Algal Bloom Task Force and request additional funding next year from the Legislature for red tide research.

“I know we’re not going to stop working until all of our communities recover,” Scott said. “We all know that more has to be done.”

Scott’s requests drew criticism last week from conservationists as being a political stunt tied to his run for U.S. Senate. Critics contend the requests fail to address the current outbreak, which has persisted for 10 months and is believed to have caused the deaths of thousands of fish, manatees, sea turtles and bottlenose dolphins.

None of the critics appeared at the meeting.

The Fish and Wildlife Conservation Commission attributes 153 manatee deaths in Manatee and Collier counties to the outbreak, the highest mortality count from a red tide outbreak since 2013.

Gil McRae, director of the Fish and Wildlife Research Institute, said 12 manatees and 50 sea turtles have been rescued after being stranded by red tide.

The source of the outbreak is the suspected bloom cycle of a single-celled organism called Karenia brevis algae that produces toxins that kill fish, birds, sea turtles, manatees and dolphins and can cause neurotoxic shellfish poisoning in human.

The outbreaks occur in salt water and are separate from the inshore toxic blue-green algae that has plagued locals from Stuart to Cape Coral and has been tied to the release of polluted waters from Lake Okeechobee.

The current red tide problem is the longest since 2006, when an outbreak lasted about 17 months.