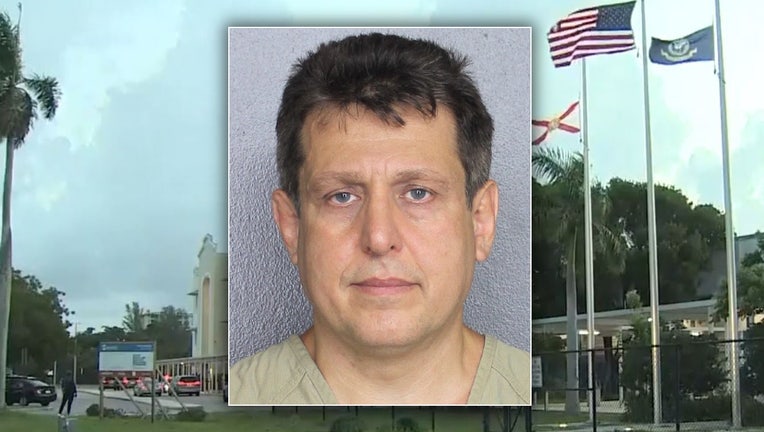 FORT LAUDERDALE, Fla. - A South Florida father faces child abuse charges after police said he got into a physical fight with a student at his daughter's school while protesting Broward County's mask mandate.

Fort Lauderdale police arrested 50-year-old Dan Bauman Wednesday morning, after they said he got into a physical altercation while recording video on his cell phone at Fort Lauderdale High School.

According to WSVN, Bauman and his daughter Isabel have been protesting at the school for several days, attempting to enter without wearing masks. They had previously been denied entry for not abiding by Broward's mask mandate.

On Wednesday morning, as Bauman recorded video, police said the student attempted to take his phone. That's when witnesses said Bauman shoved the student into a fence. According to the police report, Bauman "pushed the child by the shoulder and grabbed her hand and twisting her arm in an aggressive manner."

Officers arrested him and charged him with aggravated child abuse.

Prior to his arrest, Bauman and his daughter had both been vocal about their anti-mask stance.

"She’s the only kid to stand up and fight this. I mean, look around you, they’re so indoctrinated," Bauman told WSVN before his arrest. "She has a right to an education. I’m paying for this, our taxes are paying for this."

"If they’re against me, that’s fine," Bauman's daughter Isabel added. "I mean, they can wear a mask if they want to. My point is I don’t want to wear one and that is my right."

Principal Sean Curran said the school has offered the family several options, including medical exemptions or HOPE scholarships to offset the costs of private school for students opposed to the mask mandate.

Bauman said he and his daughter will keep protesting outside of the school and will still try to enter without masks.