Aerial view of flooding across Hardee County on Sept. 30, 2022

Flooding is a major issue here in Hardee County, where the Peace River has reached record-high levels. It is also the county with the most power outages in Florida following Ian.

WAUCHULA, Fla. - Linemen are working overtime to restore electricity to those impacted by Hurricane Ian. Hardee County has the highest number of power outages – 99%.

In a Friday morning update, Gov. Ron DeSantis said a total of 1.9 million Floridians are without power. About 15% of electricity has been restored in Lee and Charlotte counties. 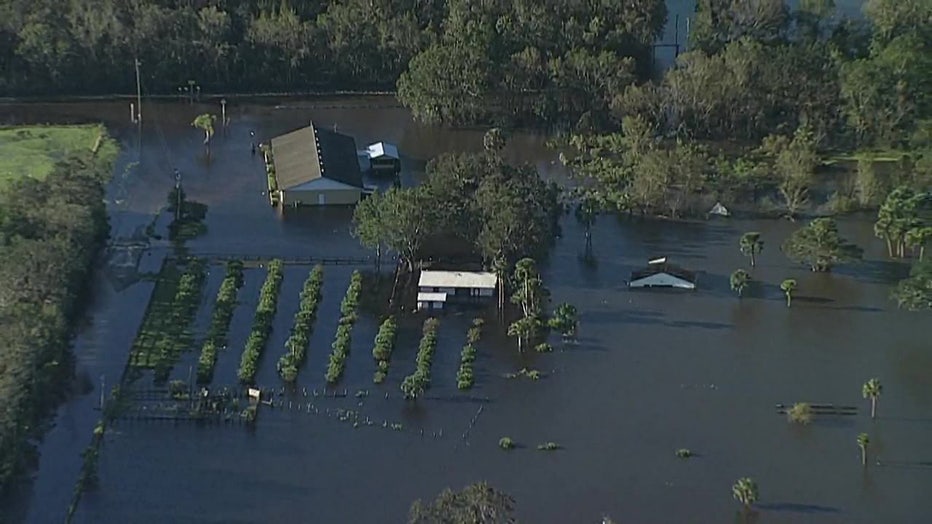 Aerials show flooding parts of Hardee County. The rural part of southwest Florida has seen plenty of precipitation during the rainy season, making Hurricane Ian an unwelcome addition of water.

In Sarasota, Collier, and Manatee counties, about half of the customers there are without power. In Desoto County, 80% of customers don't have electricity.

"These crews have been on the ground since it was safe to do so," DeSantis explained. "They are working 24/7."

Here's a breakdown of the power outages as of Friday morning:

He went on to say that transportation officials inspected 800 bridges across the state, including 67 high-priority bridges in Lee, Charlotte, Sarasota, and Manatee counties which were cleared to reopen.

Bridges that connect Pine Island and Sanibel to the mainland will need to be rebuilt.

"The Sanibel bridge had breaks in multiple parts of it, it was not where the water and pylons were – those held up really well. It was where you had some on the sandbar and that got washed out from underneath," DeSantis said. "In the meantime, they're going to be running barges in order to bring more heavy equipment onto the island to help with the response."

The other issue with Lee County is they are facing a water main break.

"That means the county does not have water at this point."

The U.S. Army Corps of Engineers began surveying how to fix the water infrastructure.