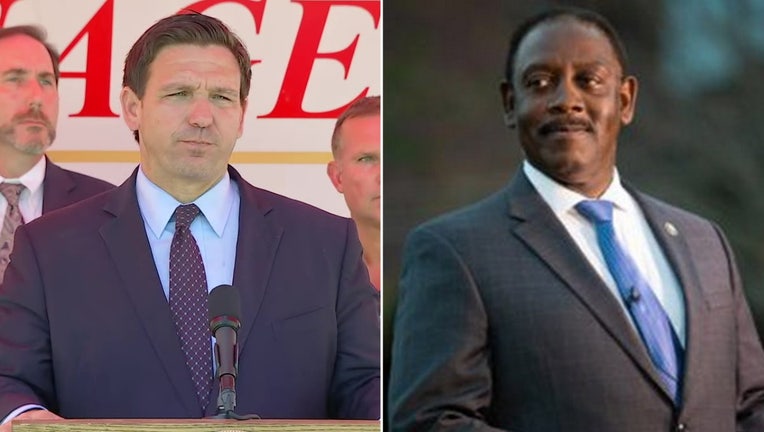 ORLANDO, Fla. - The mayor of one of Florida's largest counties on Tuesday blasted Republican Gov. Ron DeSantis, saying he has been missing in action during the latest wave of COVID-19, as some counties brought back mask mandates for government workers and other municipalities opened up new testing sites in response to overwhelming demand.

The mayor of Orange County, home to Orlando, said local governments had been forced to figure out on their own, without help from the state, how to respond to the omicron variant that has rapidly overtaken the delta variant as the dominant strain of the coronavirus in Florida.

Orange County Mayor Jerry Demings said new restrictions placed by DeSantis and the Florida Legislature on actions that can be taken by local governments and private businesses to combat the virus have made fighting the pandemic more difficult. A new law signed by DeSantis last month prevents businesses from having vaccine mandates unless they allow workers to opt out, bars schools and governments from having vaccine mandates and allows parents to sue schools with masking requirements.

Demings also said the state should help foot the bill for the testing that is being conducted at county sites.

"Our residents, all Florida residents, should be outraged and they should ask the question, ‘Where is our state? Where is our governor? Where is Ron DeSantis now?' When is the last time you saw the governor do a press briefing on COVID-19?" said Demings, a Democrat.

The governor's office did not immediately respond to an emailed request for comment. DeSantis, who is running for reelection and eyeing a potential 2024 presidential run, has become one of the nation’s most prominent Republicans through his opposition to lockdowns and other virus rules.

Demings said a third testing site would be opened in Orange County in response to demand following gatherings of family and friends over the Christmas weekend, and as visitors to local theme parks seek tests before heading home. All over the state, testing sites were overwhelmed with people waiting for hours to get a test, and one testing site in Orange County had a five-hour wait.

Dr. Raul Pino, director of Florida Department of Health in Orange County, said even if the county could open five more testing sites, they would still be overwhelmed. If someone believes they have been exposed to the virus, they should assume they are positive and isolate themselves, he said.

"A lot of people are wanting to get tested," Pino said.

Officials in Miami-Dade County opened two new coronavirus testing sites and extended hours for testing at Zoo Miami in response to an increased demand. The Zoo Miami site is open for testing 24 hours a day, seven days a week.

"We are working around the clock to make sure Miami-Dade residents have access to testing to protect themselves and their loved ones during the holiday season," Miami-Dade Mayor Daniella Levine Cava said in a news release on Tuesday.

Jackson Health System in Miami said it would not longer offer COVID test to patients without symptoms.

Meanwhile, Demings said Tuesday that all Orange County workers would be required to wear face masks while on the job.

Officials in Hillsborough County, which is home to Tampa, also said that face coverings would be required in all indoor county facilities for workers and visitors regardless of a person’s vaccination status starting Wednesday.

"The measure is being taken as a precaution for the health and safety of county employees as well as residents," Hillsborough County said in a statement.