Some I-4 shoulders open during hurricane evacuations

As of Tuesday, September 27, ESU was activated near U.S. 41 in Tampa, extending along eastbound Interstate 4 to the area near State Road 417 in Orlando. Video courtesy Kristin P.

DAVENPORT, Fla. - With more than 2 million people along the Gulf Coast urged to evacuate in advance of Hurricane Ian, Florida Department of Transportation workers cleared highway shoulders in case they are needed to increase the flow of traffic for evacuations.

The strategy was developed and first used during Hurricane Irma in 2017. 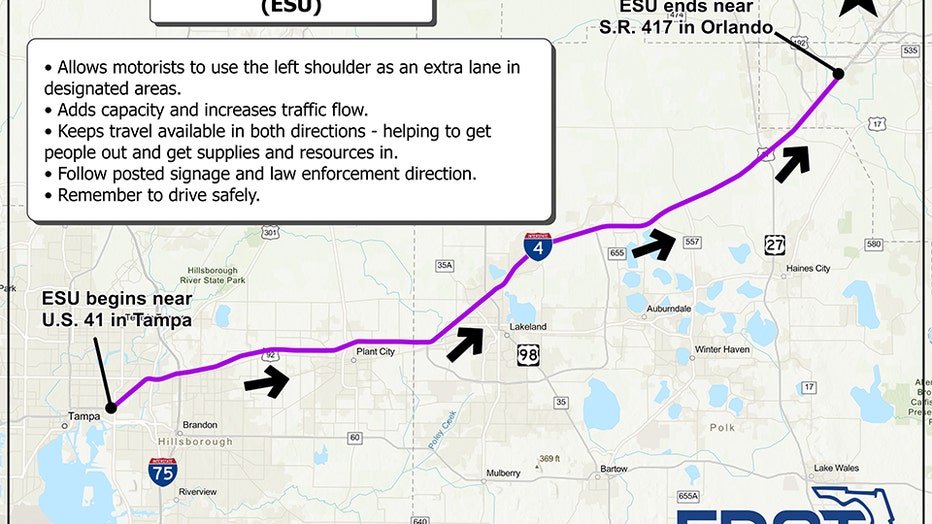 Interstate 4 Emergency Shoulder Use map for Hurricane Ian, as of Sept. 27

According to the state's ESU information website, "when ESU is operational, all motorists except large trucks, buses, and trailers may use the shoulder as a travel lane. Motorists may enter and exit the shoulder at designated locations where law enforcement officers and posted signage indicate. ESU uses the left or inside shoulder on six-lane roadways, while the right or outside shoulder is used on four-lane roadways."

As of Tuesday, September 27, ESU was activated near U.S. 41 in Tampa, extending along eastbound Interstate 4 to the area near State Road 417 in Orlando.

See how the FOX Model has Ian making landfall Wednesday afternoon or evening.

With ESU in place for the first time since 2017, and only the second time ever, some drivers were alarmed to see cars traveling in the shoulder lanes on Interstate 4 near Davenport, in Polk County.

Kristen P. was riding in the passenger seat when she recorded video from an overpass.

"People leaving the Tampa area on I-4, by Davenport, are driving on the swale. They created their own lane," she said as cars were visible coming down the shoulder lane. 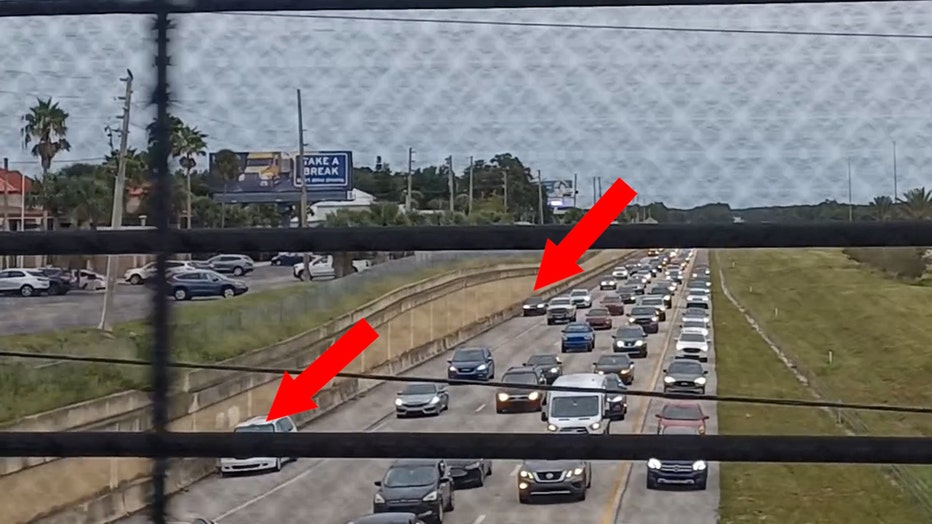 Drivers use shoulder during emergency evacuations for Hurricane Ian

She and other FOX 13 viewers were surprised to learn the practice would temporarily be allowed.

"We've also increased our resources in terms of FDOT Road Rangers and motorist assistance to aid in evacuations," Perdue said.

The state has activated 5,000 members of the Florida National Guard, and another 2,000 guard members from other states are on standby.

The population of Polk County is growing because of Hurricane Ian.

Saying preparations for the storm "should be rushed to completion," the National Hurricane Center on Tuesday warned of life-threatening storm surge along much of the Gulf Coast, with the highest risk from Fort Myers to the Tampa Bay region.

Hillsborough County Sheriff Chad Chronister is asking residents who live in an evacuation zone to follow the mandatory order to leave. Once a storm hits, deputies will have to hunker down too.

Heavy rains are expected to increase across the Florida Keys and South Florida on Tuesday, spreading Wednesday and Thursday into Central and North Florida.

The storm is expected to cause flash flooding, urban flooding, and small-stream flooding from Central Florida into southern Georgia and coastal South Carolina.

A state of emergency in place for all 67 counties and 26 school districts had closed.