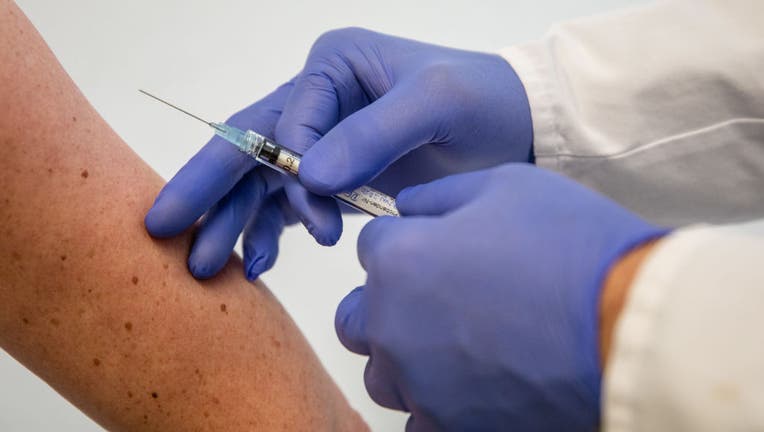 A file image dated June 19, 2020 shows a person being vaccinated at the Institute for Tropical Medicine at the University Hospital of Tübingen. (Photo by Christoph Schmidt/picture alliance via Getty Images)

TALLAHASSEE, Fla. - Florida, which has endured a surge of coronavirus infections this summer, will participate in a COVID-19 vaccine pilot program with the federal government.

State Surgeon General Scott Rivkees said Tuesday, during a conference call with hospital officials, that Florida has been invited to be part of a federal Centers for Disease Control and Prevention vaccine pilot group. Rivkees said Florida was one of four states chosen to participate, along with the city of Philadelphia.

Rivkees said details for the pilot program “will be coming as vaccines become available,” but he did not explain further.

As COVID-19, the respiratory disease caused by the coronavirus, spreads across the nation and globally, scientists around the world have raced to develop vaccines to slow the spread. Russian President Vladimir Putin this week announced the approval of a vaccine.

Related: 1 in 3 Americans say they would not get coronavirus vaccine if it were ready now, poll finds

President Donald Trump’ on May 15 announced Operation Warp Speed, which aims to deliver 300 million doses of a safe, effective vaccine for COVID-19 by January 2021. The initiative is targeting investments to the manufacturing and distribution of COVID-19 vaccines, therapeutics, and diagnostics.

The pilot program is one of the first glimpses into the Trump administration’s distribution plans. As reported Monday by Congressional Quarterly Roll Call, federal officials plan to conduct visits to the four states and develop models based on what they learn.

Public health experts believe at least 70 percent of the population must be vaccinated to achieve herd immunity, with officials fearing that demand will outpace supply.

The National Governors Association is recommending that state leaders begin to prepare. The association’s best practices committee on Aug. 3  issued a memorandum encouraging governors to get ready for distribution and included several policy recommendations to consider.

“Although a vaccine is not yet available, lessons learned from the acquisition and distribution of COVID-19 diagnostics and therapeutics suggest that governors may want to begin addressing the challenges of mass distribution before its arrival,” the National Governors Association memo said. “Immunizing the U.S. population against COVID-19 will likely require the single largest vaccination campaign ever undertaken and governors will play a key role in bringing together leaders from their state public health, immunization, and emergency management systems to design and execute the operation.”

Related: ‘The chances of it being 98% effective is not great’: Fauci says COVID-19 vaccine efficacy yet to be seen

The North Dakota Department of Health issued a statement Monday saying it was chosen, in part, because the federal government wanted to explore vaccination distribution strategies to American Indian populations.

Minnesota, meanwhile, announced it was participating in the vaccine pilot in a media call this month. Kris Ehresmann, an infectious- diseases official for the Minnesota Department of Health, described the participating states as “leaders for the country.”