TAMPA, Fla. - After last year's election, a judge called Florida the laughing stock of the world. As FOX 13 took a closer look at voting records, we found even more problems.

For example, some voters mailed their paperwork more than a week before the election, but their votes did not count because they didn’t arrive on time.

Matthew Thomas mailed corrections to his ballot at a post office in Hillsborough County, near his work, to the elections office in Pinellas, near his home. He said he dropped it off a week before the election.

However, we checked the stamp on his envelope and found it arrived a week after the election. It is just one of at least 6,882 votes across Florida that the state says were postmarked before Election Day, which did not count because they arrived too late.

We also found a couple of ballots in Polk County were postmarked October 19. That's 18 days before the election, and they still arrived too late to count.

Meanwhile, Broward County reported more than 3,300 mail-in ballots arrived too late, and did not have a breakdowns on when those ballots were postmarked.

Miami Dade told FOX 13 it had 3,500 ballots arrive too late. That includes 22 ballots mailed in October that didn't make it by the November 6th deadline, even one postmarked October 17. An overseas ballot was postmarked September 25, and still didn’t arrive on time.

"This should not be happening. This isn’t America. This is not what we do," said Thomas. “It’s a fundamental right I fought for."

Plus, other state and county numbers do not appear to line up. State officials told the court Palm Beach County had 74 domestic ballots that were postmarked before the election, but arrived too late to count.
The former Palm Beach supervisor who managed the election said she did not document when the ballots were postmarked, and her records show 970 domestic ballots arrived too late. 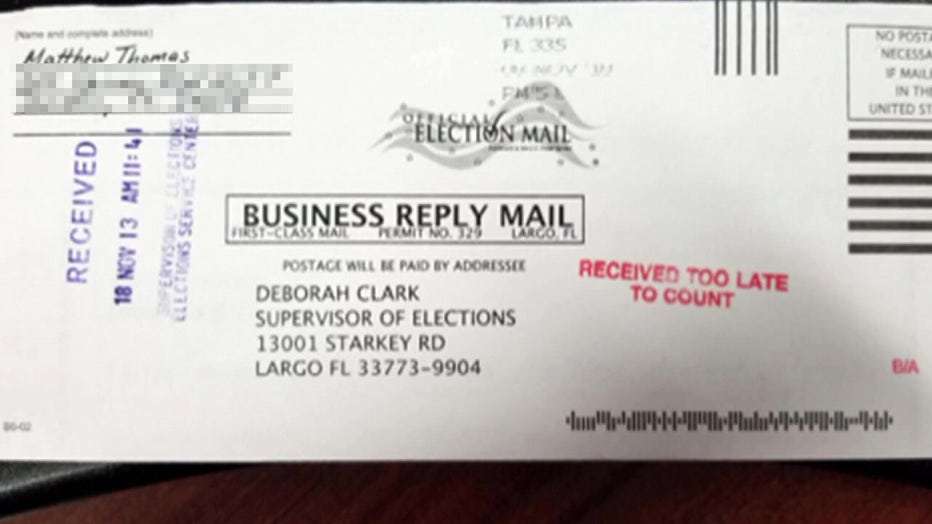 Meanwhile across Florida, thousands of legally registered voters turned in their ballots before the election, and they still didn't count because their signatures did not match the ones on file with the elections offices.

Darrell Fluker's ballot arrived in the Hillsborough elections office in October. But they rejected it because the signature on the ballot did not match the one on file.

And while the election managers say they notify voters when that happens, some like Derrell Fluker said they must have missed the notice.

“Whatever they’re doing, they need to fix it and it's time for change,” Fluker said. “It makes you feel like you’re nobody, no matter what you think you can’t change anything, and your vote doesn’t matter, and that’s how it is.”

The state's signature law can hit seniors whose signatures change over time, and younger voters who sign up as teens before they stylize their signatures as young adults.

We found the numbers of ballots rejected for signature variations has also gone up since 2016. Hillsborough rejected 103 ballots for mismatched signatures in 2016. In 2018 -- a lower turnout election -- the county rejected 282.

Editor's note: This version of the story has been updated to better distinguish between "ballots" and "votes."