TAMPA, Fla. - Each month, a group of injured veterans are invited to a special dinner in Tampa. It's a way to say, "thank you" and to let them know they're not forgotten and with Thanksgiving one week away, this one was extra special.

The ballroom at USF Embassy Suites smelled like Thanksgiving. And there was plenty of gratitude in the air. The people seated around the tables have stories to tell, like 97-year-old World War II vet IJ Karpay.

"I went into the Navy before my 18th birthday and I came out before my 21st birthday," said Karpay. "Three years in the Navy. It made a man out of me. It was good."

Every third Thursday, the non-profit "Operation Helping Hand" puts on this event near James A. Haley VA Hospital. It's free for veterans and their families, some going through major trauma rehab.

"We started with potluck dinners, wives bringing potluck dinners to the VA, and we expanded," said Jim Griffin, the chairman of Operation Helping Hand.

The tradition started in 2004, and it continues nearly two decades later thanks to local sponsors, businesses donating food and volunteers.

"We get new folks every month coming in here to share the experience," Griffin said. "They leave with a very positive experience, unlike some of the other folks in different wars, that they're still taken care of." 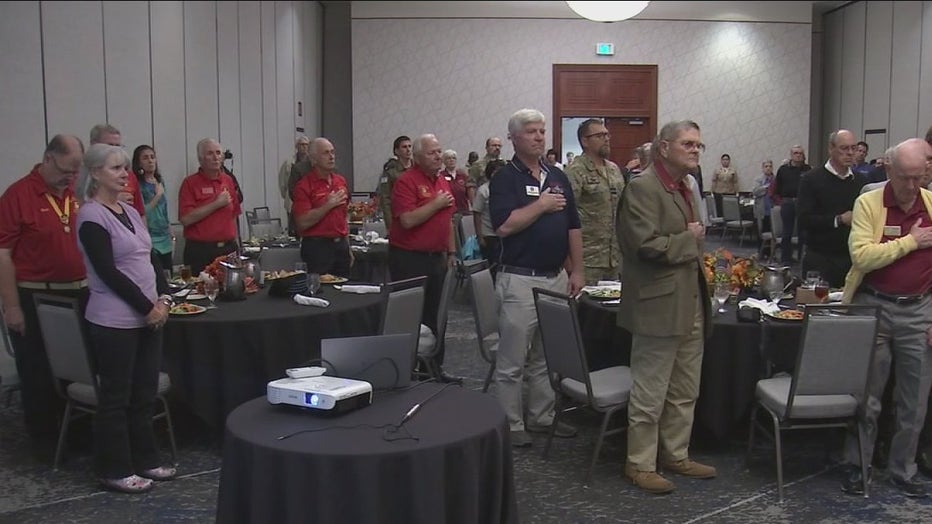 Freedom High School presented the colors. Members of the U.S. CENTCOM Coalition join each dinner, too.

COVID-19 protocols and rising flu cases kept some veterans at the hospital, so Thursday's event was streamed back to them. These dinners provide a chance for those who've served to keep serving.

"We're all part of a special group of people," said volunteer Jeanne Richard, retired Lt. Col. with the USAF Nurse Corps. "We've served on our active-duty tours, and now we get to carry on our servant attitude toward the others, the ones that have taken our places."

In the week between Veterans Day and Thanksgiving Day, it's one more opportunity to give thanks for those who've given so much.

"I'm just happy I did what I did," Karpay said. "I'm very happy. And I love this country."

PREVIOUS: ‘We need to support them’: 24/7 statewide line works to help veterans

Though the pandemic forced them to scale down these dinners, Operation Helping Hand is looking forward to increasing attendance again.

Vets have to reserve a seat ahead of time and seating is limited. You can do that by calling 813-771-6744 (OPHH.) Griffin said they're always looking for new sponsors to help these dinners continue.