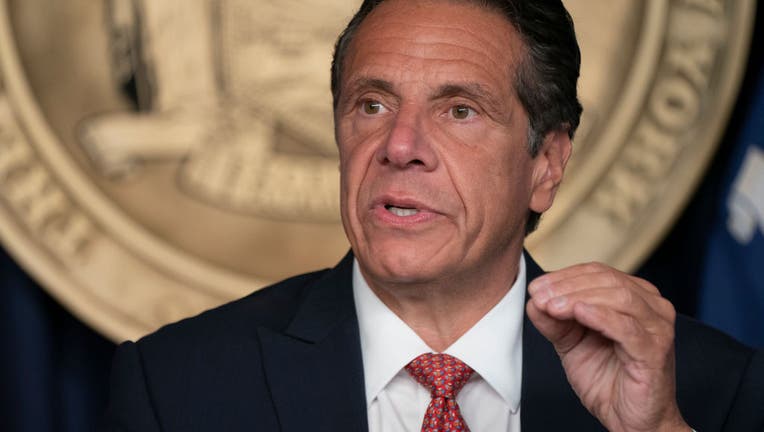 Westchester County District Attorney Mimi Rocah said that while there was evidence to conclude the conduct the women described did occur, the office could not pursue criminal charges.

"In both instances, my office has determined that, although the allegations and witnesses were credible, and the conduct concerning, we cannot pursue criminal charges due to the statutory requirements of the criminal laws of New York," Rocah said in a statement.

A message seeking comment was left with a spokesperson for Cuomo.

Last week, a Long Island prosecutor said Cuomo wouldn’t face criminal charges after the same trooper said she felt "completely violated" by his unwanted touching at an event at Belmont Park in September 2019. Acting Nassau County District Attorney Joyce Smith said the allegations were credible and troubling but not criminal under state law.

Former New York Gov. Andrew Cuomo has been criminally charged for allegedly groping a former aide. The Albany County Sheriff Craig Apple provided some new details on the investigation and what happens next for Cuomo. Cuomo has previously denied the allegations and will appear in court to face the charge next month.

A report in August by Attorney General Letitia James chronicled accusations from 11 women against Cuomo and led to his resignation from office, although he has attacked the findings as biased and inaccurate.

In October, the Albany County sheriff’s office filed a misdemeanor groping complaint against Cuomo, but a week later the district attorney asked a judge for more time to evaluate the evidence.

The district attorney said the sheriff’s one-page criminal complaint, based on allegations from a woman who said Cuomo slid his hand up her blouse and grabbed her breast at the governor’s mansion in late 2020, was "potentially defective."

At the prosecutor’s request, a court delayed Cuomo’s scheduled arraignment until Jan. 7.

The alleged Westchester County incident involving the trooper occurred at Cuomo’s home in Mount Kisco, according to the district attorney’s office. The trooper told investigators that after she asked the governor if he needed anything, he responded by asking her if he could kiss her.

The trooper was concerned about what would happen if she declined, so she told investigators she answered, "Sure."

In the other incident, Cuomo allegedly greeted the woman by grabbing her arm, pulling her toward him and kissing her on the cheek while the two were at an event at White Plains High School, according to the district attorney’s office.