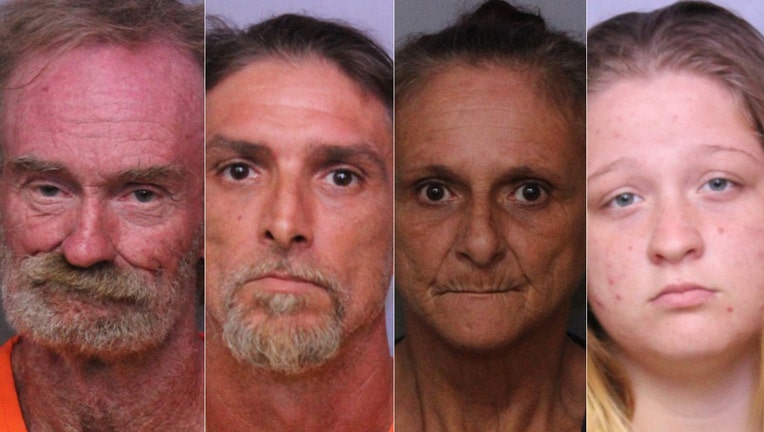 FROSTPROOF, Fla. - The father of the suspect in the Frostproof triple murders has been arrested along with three other people for environmental hazards on their Polk County property.

The sheriff's office served search warrants at the Frostproof property where suspect Tony "T.J." Wiggins lived along with his girlfriend Mary Whittemore and his brother Robert.

Deputies arrested Tony Wiggins Sr., 58, Robert Keene, 42, Nydia Liboy, 54, and Chyanne Eccleston, 19, all of whom lived on the property together.

According to the affidavits, the camper the suspects lived in had septic holding tanks draining onto the ground in a small hole, with feces visible at the surface of the ground.

Wiggins told investigators he knew the septic tank was illegal but said he couldn't afford to have a proper system installed.

The property was also scattered with tires and broken down vehicles, metals, appliances and other debris.

Wiggins also said the tires and other debris were brought to the property to be scrapped for metals or fixed and sold.

Detectives noted an excessive amount of flies swarming around the trash and sewage.

"The property where these suspects live looks like a landfill and has raw sewage all over the ground," Sheriff Grady Judd said. "It's not only not fit for humans, I wouldn't even let a dog live there."

The four suspects face several charges, including operating an unpermitted landfill, improperly built or maintained septic tanks, unpermitted waste tire storage, and the creation, maintenance or causing of any condition capable of breeding flies, mosquitoes or other arthropods capable of transmitting diseases, directly or indirectly to humans.

TJ Wiggins and William Robert Riggins, who are both still in jail for the triple homicide, now also face environmental charges for the conditions on the property.