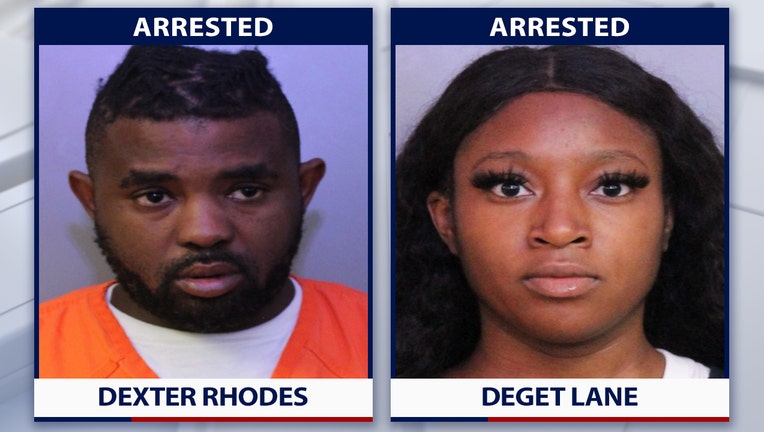 HAINES CITY, Fla. - Dexter Rhodes, 33, and Deget Lane, 27, are facing more than 300 charges after being were arrested Tuesday night for running an illegal virtual gambling operation.

According to the Haines City Police Department, Rhodes and Lane were using Facebook to host gambling games in which they profited hundreds of dollars for some games dating back to April. Rhodes was charged on 85 charges of conducting a lottery for money. Lane was arrested on 251 charges.

While executing a search warrant, detectives located more than 135 grams of marijuana, a digital scale and baggies for packaging.

During the search, detectives said they also located numerous ledgers from the lottery in multiple locations throughout the house at 162 Hidden Lake Loop. A 2-year-old was also living in the home.

Rhodes was also charged with possession of marijuana with intent to sell, possession of more than 20 grams of marijuana, drug paraphernalia and maintaining a residence for drug use. Officers said Rhodes was on house arrest with an electronic monitor when he was arrested for these offenses. Rhodes and Lane were taken to the Polk County Jail.

Police said Rhodes has more than 30 arrests in Polk County, including numerous drug charges, battery, firing a weapon in a public place and multiple domestic violence charges. This is Lane's fifth arrest in Polk County, according to police. Previous charges include driving without a license, shoplifting and drug possession.

"This is a community quality of life issue," Police Chief Jim Elensky said. "When criminal activity like this begins to take root, it opens the door for other criminal enterprises to step in. In fact, we see in this investigation how the search warrant for the illegal lottery shed light on the illegal drug trade Rhodes was running. We are determined to keep Haines City a destination where people want to live, work and play, where they want to raise a family."