11-year-old Jimi "Monty" Hernandez was accepted into Arizona State University with plans to become a pediatric neurologist. He will be studying biochemistry, then head to medical school after graduating from ASU.

TEMPE, Ariz. - In 2022, Skyline High School in Mesa will graduate its youngest student.

Jimi Hernandez is 11 years old now, but he’ll be 12 when he accepts his high school diploma. Then, he's off to college.

He was accepted to Grand Canyon University, as well as Arizona State University. He decided on becoming a Sun Devil. 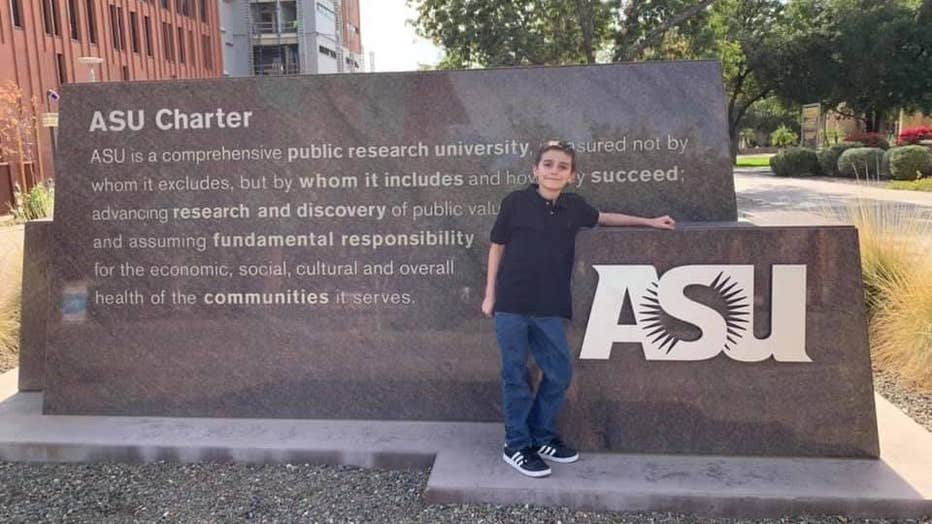 The young boy, who goes by "Monty," will soon be driven to ASU's campus by his mother, Danielle, for class come fall semester.

Monty was diagnosed with autism and a heart condition at a young age.

"He went through special education from age three to five. They IQ tested him, and we found out he was profoundly gifted," his mother said.

From there, he skipped many grades and the family even moved from California to Arizona to take advantage of advanced education opportunities.

Monty says after graduating from high school next year, he can't wait to be on campus with his much older peers.

"That's what drove us to come to Arizona is him being able to be on campus. He loves people, he loves lectures, he lives communication. He wants to be right there," Danielle said.

She added, "There’s sadness because he’s growing up so fast, but there’s excitement for him to see what his future holds. Every day it’s a new challenge, but it’s an adventure and accomplishment."

Jimi "Monty " Hernandez, an 11-year-old student at Skyline High School in Mesa, will graduate next May and then head to Arizona State University, where he plans to major in biochemistry and pre-med. FOX 10's Danielle Miller reports.