DeSantis: 'Potential' for Ian to make landfall as a Category 5 hurricane

Florida Gov. Ron DeSantis gave an update on Hurricane Ian on Wednesday morning prior to landfall, discussing what's known about the near-Category 5 storm.

Thousands of flights were canceled Wednesday as Hurricane Ian approached Florida with a storm surge that could cause catastrophic damage along the state’s Gulf Coast.

According to flightaware.com, nearly 3,500 flights were canceled as of 8:45 a.m. Wednesday. Florida airports — Orlando International, Miami International, Tampa International and Fort Lauderdale International — have the most cancellations, but the impacts are also trickling over to Hartsfield-Jackson Airport in Atlanta and other airports along the East Coast.

Major airlines are allowing affected passengers to rebook without a fee or paying the difference in fare, but each airline’s travel waiver has different restrictions and deadlines for rebooking:

Hurricane Ian is expected to make landfall late Wednesday afternoon or early Wednesday evening somewhere north of Fort Myers and about 125 miles south of Tampa.  As of Wednesday morning, Ian’s winds were at 155 mph — just shy of the most devastating Category 5 hurricane status. 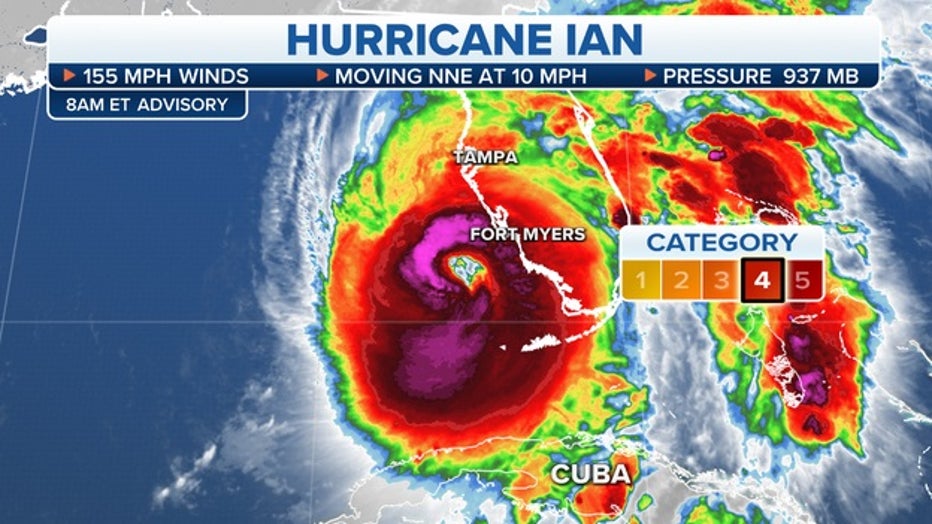 More than 2.5 million people were under mandatory evacuation orders, but by law no one can be forced to flee. Florida Gov. Ron DeSantis said Wednesday that the time to safely evacuate has passed.

"If you are in any of those counties it is no longer possible to safely evacuate. It’s time to hunker down and prepare for the storm," DeSantis said. "Do what you need to do to stay safe. If you are where that storm is approaching, you’re already in hazardous conditions. It’s going to get a lot worse very quickly. So please hunker down."

The governor said the state has 30,000 linemen, urban search and rescue teams and 7,000 National Guard troops from Florida and elsewhere ready to help once the weather clears.

Catastrophic storm surges could push as much as 12 feet to 16 feet of water over coastal areas straddling Punta Gorda and Fort Myers, which are between Naples and Sarasota, the hurricane center warned. Rainfall near the area of landfall could top 18 inches.

The storm has already battered Cuba, bringing down the country’s electricity grid and leaving the entire island without power.