The FBI included these images in John Nassif's arrest affidavit.

TAMPA, Fla. - A Florida man who posted Facebook photos from the Capitol riot has now been arrested for his alleged role there.

John Maron Nassif of Chuluota was charged Monday with violent entry and disorderly conduct on Capitol grounds, as well as entering a restricted building without lawful authority.

According to his arrest affidavit, a witness contacted the FBI three days after the January 6 riot to report that Nassif had posted pictures and videos from inside and outside the Capitol during the riot, commenting on one of them, "You know I was there right?"

Screenshots taken by the FBI also show Nassif talking about deleting his Twitter account in favor of an encrypted communication method. 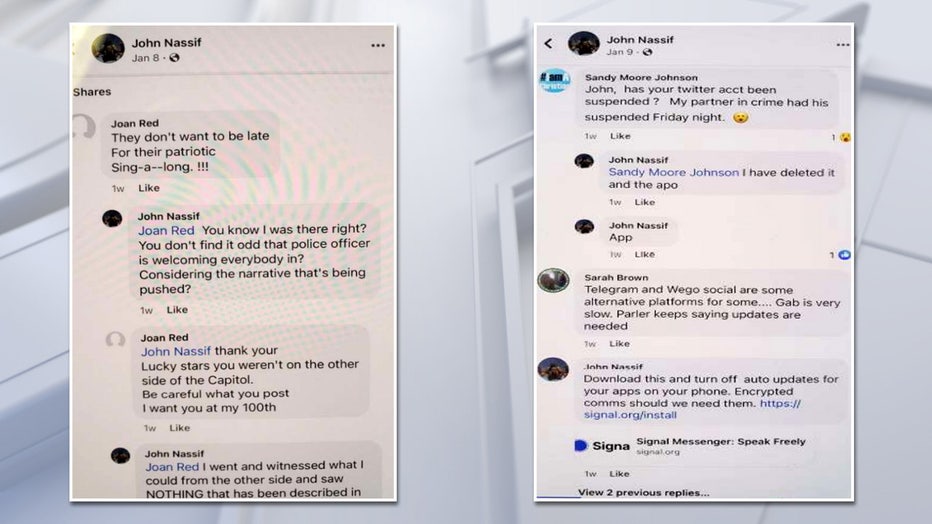 Days later, a second witness alerted the FBI to another post allegedly by Nassif which included photos inside and outside of the Capitol.

Video taken of the rioters inside the Capitol by Freedomnews.tv shows a man whose clothes and hat match Nassif’s selfie from that post. Both witnesses later told agents that the man in the footage was indeed Nassif.

The January 9 comment about deleting his Twitter account was still visible Monday on the account identified by the FBI as belonging to Nassif, though the photos shown elsewhere in the FBI documents were not publicly accessible.