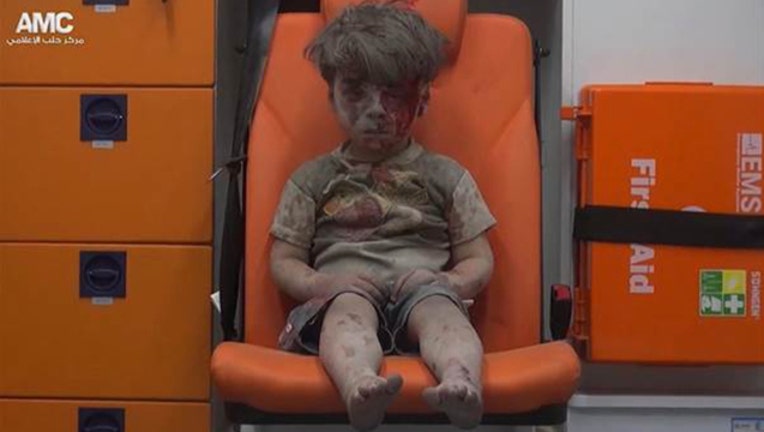 BEIRUT (AP) — The Russian military said Thursday it was ready to back a U.N. call for weekly cease-fires for Syria's contested city of Aleppo, as haunting footage of a young boy's rescue from the aftermath of an airstrike shook global media.

The image of the stunned and weary-looking boy, sitting in an ambulance caked with dust and with blood on his face, captured the horror that has beset the war-torn northern city as photographs of the child were widely shared on social media.

An hour after his rescue, the badly damaged building the boy was in completely collapsed.

A doctor in Aleppo identified the child as 5-year-old Omran Daqneesh. He was brought to the hospital, known as "M10," on Wednesday night, following an airstrike by Russian or government warplanes on the rebel-held neighborhood of Qaterji, said Dr. Osama Abu al-Ezz. The boy suffered head wounds but no brain injury, and was later discharged.

Rescue workers and journalists arrived shortly after the strike and described pulling victims from the rubble.

"We were passing them from one balcony to the other," said photojournalist Mahmoud Raslan, who took the dramatic photo. He said he had passed along three lifeless bodies when someone handed him the wounded boy. Raslan gave the child to a rescue worker, who rushed him to the ambulance.

Eight people died in the strike, including five children, according to a doctor who gave only his first name, Abo Mohammadian. Many doctors working in Aleppo's opposition areas do not give their full names for fear of reprisals against their relatives in government areas.

A nurse who treated Omran said "he was in a daze."

"It was as if he was asleep. Not unconscious, but traumatized — lost," said Mahmoud Abu Rajab.

Medical workers feared internal injuries, but an X-ray and an ultrasound revealed his wounds were superficial. Abu Rajab stitched up the child and wrapped his forehead and left eye in a bandage.

Omran's three siblings, ages 1, 6, and 11, and his mother and father were also rescued from the building. None sustained major injuries.

"We sent the younger children immediately to the ambulance, but the 11-year-old girl waited for her mother to be rescued," said Raslan, adding that the woman's ankle was pinned beneath the rubble.

In the video posted late Wednesday by the Aleppo Media Center, a man was seen carrying Omran away from the chaotic nighttime scene and into an ambulance. Looking dazed, the boy ran his hands over his blood-covered face, then wiped them on the orange ambulance chair.

The powerful imagery reverberated across social media, drawing to mind the anguished global response to the photos of Aylan Kurdi, the drowned Syrian boy whose body was found on a beach in Turkey and came to represent the horrific toll of Syria's civil war.

The fighting has frustrated the U.N.'s efforts to fulfill its humanitarian mandate, and the world body's special envoy to Syria cut short a meeting Thursday of the ad hoc committee — chaired by Russia and the United States — tasked with deescalating the violence so that relief can reach beleaguered civilians.

The U.N. envoy, Staffan de Mistura, said there was "no sense" in holding the meeting in light of the obstacles to delivering aid. The U.N. is hoping to secure a weekly 48-hour pause to the fighting in Aleppo.

Later Thursday, Russian Defense Ministry spokesman, Maj.-Gen. Igor Konashenkov said Russia would back the initiative on condition the aid convoys travel to both rebel-controlled and government-held parts of the city. He said Russia was ready to support deliveries starting next week.

In Washington, State Department spokesman John Kirby said that while the U.S. would welcome any "genuine effort to stop the bombing, even if it is just for 48 hours, that's not the long term answer."

"It is important for Russia to work with us ... to try to come to an agreement on the technicalities of these proposals, which if ... fully implemented in good faith, could allow the cessation of hostilities to be expanded across the country," Kirby said.

Scenes like the airstrike Wednesday night that wounded Omran are commonplace in Aleppo, where 233 civilians were killed in indiscriminate exchanges of fire between rebels and government forces in the first two weeks of August alone, according to the Britain-based Syrian Observatory for Human Rights monitoring group.

"It's taxing, emotionally," said Abu Rajad, the nurse. "Sometimes, you have to cry. Once, there were three children — both their parents had died — and they were just standing in front of us."

Doctors in Aleppo use code names for hospitals, which they say have been systematically targeted by government airstrikes. "We are afraid security forces will infiltrate our medical network and target ambulances as they transfer patients from one hospital to another," Abu al-Ezz said.

Activists living in opposition areas rely on informants in government-controlled Latakia province to warn residents of impending airstrikes. On Wednesday evening, an informant relayed word of a warplane taking off from the Russian air base at Hmeimim.

"We expected the plane to arrive in Aleppo airspace in two minutes, and sure enough it did," Raslan said. "It struck twice."

No one was injured in the first strike, he said. The second one turned little Omran's life upside down.

Meanwhile, government warplanes bombed Kurdish-controlled positions in Syria's northeast, a move that could augur a new twist to the country's multi-layered war.

Redur Khalil, a spokesman for the main Kurdish fighting force, said the bombs struck residential areas and positions belonging to the Kurdish police force in the city of Hassakeh.

The attack caused multiple casualties and sent residents fleeing from the city, said Khalil adding that government forces would be held accountable for these "brutal, blatant attacks against our people."

The two sides have clashed before but it was the first reported aerial bombardment of Kurdish positions in the city by government forces.

Elsewhere, the Russian military said it launched another round of aerial attacks from Iran, striking Islamic State targets in Syria's eastern province of Deir el-Zour for a third straight day.

Associated Press writers Zeina Karam in Beirut, Jamey Keaten in Geneva and Vladimir Isachenkov in Moscow contributed to this report.