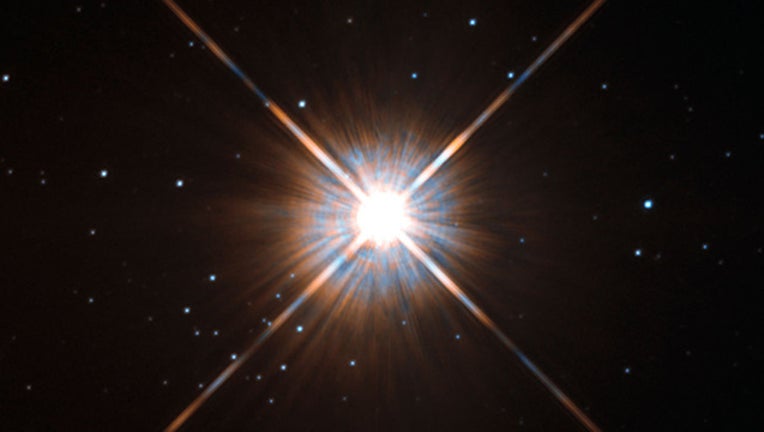 WASHINGTON (AP) - After scanning the vast reaches of the cosmos for Earth-like planets where life might exist, astronomers have found one right next door.

A planet that is rocky like Earth and only slightly bigger has been discovered orbiting Proxima Centauri , the nearest star to our solar system, scientists reported Wednesday. It is probably in the not-too-hot, not-too-cold Goldilocks Zone where liquid water — a key to life — is possible, if the planet has an atmosphere. And it is a mere 4.22 light-years from Earth, or nearly 25 trillion miles.

It is easily the closest potentially habitable planet ever detected outside our solar system — and one that could be reachable by tiny, unmanned space probes before the end of the century, in time for some people alive today to witness it.

The international team of astronomers that announced the discovery did not actually see the planet but deduced its existence indirectly, by using telescopes to spot and precisely calculate the gravitational pull on the star by a possible orbiting body — a tried-and-true method of planet-hunting.

"We hit the jackpot here," said Guillem Anglada-Escude , an astrophysicist at the Queen Mary University of London and lead author of a study on the discovery in the journal Nature . He said the planet is "more or less what we have on Earth."

They're calling it Proxima b, and while it could be like Earth in the important features, it would probably still look very alien.

It is 4.6 million miles from its red dwarf star, or just one-twentieth of the distance between Earth and the sun, creating an incredible orange sky with no blue, so it looks like a perpetual sunset. And if that's not different enough, the planet circles its star so quickly that its year is about 11 days.

The planet doesn't rotate, so one side is always facing its star and the other side is always dark and colder. It is bombarded with X-rays and ultraviolet light, but that wouldn't necessarily be fatal to life, since life can exist underground, scientists said.

Scientists in the past 20 years have found more than 3,000 planets outside our solar system, or "exploplanets." And more than 40 of them seem to be in the habitable zone just right for life.

But this one "basically puts a giant flashing neon sign on the nearest star saying: See this right here," said study co-author R. Paul Butler of the Carnegie Institution for Science.

It would take more than eight years for an energy pulse or radio signal traveling at the speed of light to go there and back. NASA's New Horizons probe, the fastest spacecraft launched, left Earth hurtling toward Pluto at about 36,000 mph. At that speed, it would take more than 78,000 years to get there.

Earlier this year, an all-star team of scientists and business leaders including Stephen Hawking and Mark Zuckerberg announced Breakthrough Starshot , a project to send out hundreds of light-powered space probes that would weigh about a gram, travel at one-fifth the speed of light and send pictures back to Earth.

Breakthrough Starshot executive director Pete Worden, a former top NASA official, said organizers are hoping to include Proxima in their plans. Even at the hoped-for speed, it will take 20 years to get there and four more years for photos to come back. Worden said he hopes they will launch by 2060.

Yet in the vastness of space, Proxima b is practically just over the fence, "like your next-door neighbor," Butler said. Proxima b is more than 50 trillion miles closer than the previous closest potentially habitable exoplanet.

Outside experts praised the finding as rock-solid and thrilling.

"It is inspiring to find a potentially habitable world on our cosmic doorsteps, around our next star," said exoplanet expert Lisa Kaltenegger, director of Cornell University's Carl Sagan Institute . "It is significant because if we needed inspiration to try to reach the next star, now we have it."

Four years ago another group of scientists excited the world with a claim of a planet — not in the habitable zone — around Alpha Centauri, a star a bit farther away. That claim was met with suspicion by other astronomers, who later showed that it was unlikely to be real but a ghost signal from the past.

Xavier Dumusque, an author of the Centauri paper, said it is no longer clear if that was a planet, but in an email he said the team led by Anglada-Escude makes a good case for its own discovery.

Anglada-Escude said there is only a 1-in-10-million chance that what they saw was a false positive, proclaiming "no doubt" that what he found was real. That's because a telescope in Chile that was used to look at Proxima every night for 60 days found a gravitational effect on its star every 11 days or so. Then a close examination of years of data from a different telescope found the same thing, Butler said.

There are still many questions, especially the crucial one of whether the planet has an atmosphere.

Harvard astronomer Avi Loeb, who isn't part of the discovery team but is advisory board chairman for Breakthrough Starshot, said Proxima might someday prove vital to humanity's future.

"A habitable rocky planet around Proxima would be the most natural location to where our civilization could aspire to move after the sun will die, 5 billion years from now," he said in an email.

Follow Seth Borenstein at http://twitter.com/borenbears and his work can be found at http://bigstory.ap.org/content/seth-borenstein