Kim Potter trial: All Daunte Wright had to do was stop, defense says

Opening statements are underway in the manslaughter trial of Kim Potter, a former Brooklyn Center, Minnesota, police officer, for the shooting death of Daunte Wright in April. Defense attorney Paul Engh told the jury that all Daunte Wright had to do was surrender to police during the traffic stop and the actions by Potter were an effort to save her fellow officers from serious injury or death.

At former Minnesota police officer Kim Potter’s manslaughter trial for fatally shooting Daunte Wright, a Black motorist, the core of her defense is clear: She says she meant to use her Taser but grabbed her handgun instead.

Many activists have refused to accept the former Brooklyn Center officer’s explanation. And the prosecution argued in its opening statement that Potter — a 26-year police veteran — had the experience and training to know better.

Taser-gun mix-ups are rare but they have happened in several states in recent years.

Here are some questions and answers about such incidents:

HOW FREQUENTLY DOES THIS HAPPEN?

Experts agree that such incidents are rare and probably happen fewer than once per year throughout the U.S. A 2012 article published in the monthly law journal Americans for Effective Law Enforcement documented nine cases dating back to 2001 in which officers shot suspects with handguns when they said they meant to fire stun guns.

WHY DOES IT HAPPEN?

Reasons that have been cited include officer training, the way they carry their weapons and the pressure they feel during dangerous and chaotic situations. To avoid confusion, officers typically carry their stun guns on their weak sides — the side of their nondominant hand — and away from handguns that are carried on their dominant hand’s side. That’s how Potter carried hers, and the chief of her suburban Minneapolis police department at the time of the shooting said that’s how the department’s officers were trained.

Prosecutor Erin Eldridge told jurors that the Brooklyn Center Police Department's policy requires that officers carry their Taser on their nondominant side and their firearm on their dominant side. In keeping with that, Potter carried her gun on her right and her Taser on her left.

Officers can choose how they want to position their Tasers in their duty belts, so that they have the option of drawing it from across their body with their dominant hand, or they can choose to draw it with their nondominant hand. Potter had her Taser positioned in a "straight draw" position on her left, so she would draw it with her left hand.

"The only weapon she draws with her right hand is her gun, not her Taser," Eldridge said. 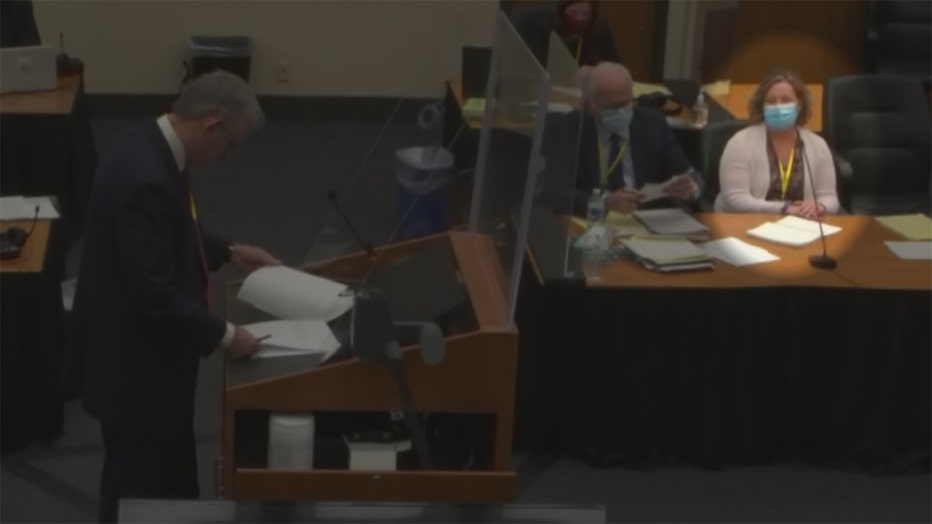 Kim Potter (right) sits with her defense attorneys at her trial in the shooting death of Daunte Wright.

Eldridge also detailed how Brooklyn Center officers go through Taser training every year, and get training materials that include warnings on how confusing a Taser with a handgun can cause death or serious injury.

And she told jurors they'll hear about how Potter's Taser and her handgun both had a very different look and feel, starting with the color. A Taser is bright yellow. Potter's gun was black and weighed about twice as much.

Defense attorney Paul Engh told jurors that an expert will testify about how in chaotic situations like this shooting, a person’s ingrained training takes over. He said Potter had 26 years of gun training, but fewer years of training on her Taser, which is a newer weapon.

Engh said they'll hear that Potter made an "action error," the sort in which someone does something while meaning to do something else, such as writing the previous year on a check out of habit, or typing an old password into a computer. He also compared them with errors made under stress by experienced pilots or surgeons.

"We are in a human business," Engh said. "Police officers are human beings. And that’s what occurred."

Bill Lewinski, an expert on police psychology and the founder of the Force Science Institute in Mankato, Minnesota, has used the phrase "slip and capture" errors to describe the phenomenon.

Lewinski, who has testified on behalf of police, has said officers sometimes perform the direct opposite of their intended actions under stress — that their actions "slip" and are "captured" by a stronger response. He notes that officers train far more often on drawing and firing their handguns than they do on using their stun guns.

Other experts are skeptical of the theory.

"There’s no science behind it," said Geoffrey Alpert, a criminology professor at the University of South Carolina and an expert on police use of force. "It’s a good theory, but we have no idea if it’s accurate."

Alpert said a major factor in why officers mistakenly draw their firearm is that stun guns typically look and feel like a firearm.

WHAT ARE SOME OTHER CASES?

In one of the best-known cases, a transit officer responding to a fight at a train station in Oakland, California, killed 22-year-old Oscar Grant in 2009. The officer, Johannes Mehserle, testified at trial that, fearing Grant had a weapon, he reached for his stun gun but mistakenly pulled his .40-caliber handgun instead. Grant was shot as he lay face down.

Mehserle was convicted of involuntary manslaughter and sentenced to two years in prison. His department paid $2.8 million to Grant’s daughter and her mother.

In Tulsa, Oklahoma, a white volunteer sheriff’s deputy, Robert Bates, said he accidentally fired his handgun when he meant to deploy his stun gun on an unarmed Black man, Eric Harris, who was being held down by other officers in 2015.

Bates apologized for killing Harris but described his deadly mistake as a common problem in law enforcement, saying "This has happened a number of times around the country... You must believe me, it can happen to anyone."

Bates was convicted of second-degree manslaughter and sentenced to four years in prison. Tulsa County ultimately agreed to pay $6 million to Harris’ estate to settle a federal civil rights lawsuit.

In 2019, a suburban St. Louis police officer, Julia Crews, said she meant to use her stun gun but mistakenly grabbed her service revolver and shot a suspected shoplifter, Ashley Hall, who suffered serious injuries. Crews resigned and was charged with second-degree assault. That was eventually dropped at Hall’s request after the victim and the former officer agreed to participate in restorative justice mediation. Separately, the city of Ladue agreed to a $2 million settlement with Hall.